The mystery — and true history — of a one-hit wonder

My favorite painting is by 17th century painter Carlo Dolci, who never made anything else like it. Now we know why 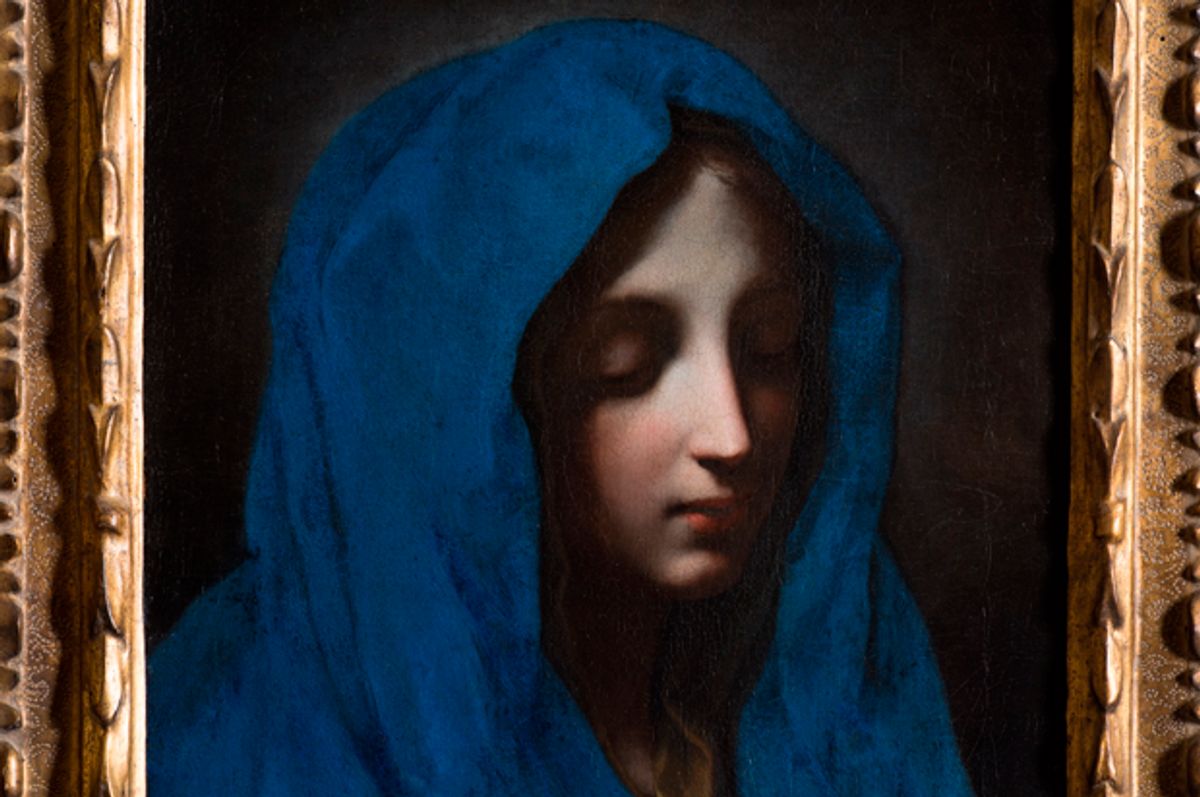 "The Blue Madonna," 17th Century. Oil on canvas. (The John and Mable Ringling Museum of Art.)
--

In recent years, connoisseurship has become a naughty word in the art world. The intrinsic, and often subjective, knowledge of an artist’s oeuvre, the rather elitist sense that certain experts know better than the rest of the world about which artworks are authentic, the idea that you can recognize an artist’s hand at first sight, all sound a bit old-fashioned, like a 19th-century parlor trick. Stories of experts getting it wrong abound, and the famous 1929 trial around the “American Leonardo,” in which the most famous connoisseur of them all, Bernard Berenson, dismissed a painting of "La Belle Ferroniere" as a copy, not possibly by Leonardo (since the original was in the Louvre), without having seen anything but a black-and-white photograph of it, heightened the sense of an "us vs. them" in the art world: The in-the-know elites, the wealthy, the self-proclaimed experts keeping regular folks at bay.

But while connoisseurship is over-relied-upon, to the delight of forgers and the dismay of the occasional fooled collector, and it should not be the only way art is authenticated, it should not be dismissed, as it has been of late, to the point where one professor I know was mocked by his colleagues for offering a course with “connoisseurship” in its title. I studied art history at The Courtauld Institute in London, one of the few remaining stalwarts where connoisseurship is taught. Scrutinizing brushstrokes, looking at dozens of works by an artist until you recognize his “hand” as distinguished, often with great difficulty, from that of his apprentices and assistants, who demonstrated their ability by mimicking their master as precisely as possible. Sometimes this was easy: Even non-specialists can spot which angel in Verrocchio’s "Baptism of Christ" was painted by a teenage Leonardo. But most often, styles blend to the point of indistinction, and generations of art historians joust in peer-reviewed journals over their opinions of authorship.

The most beautiful painting I’ve ever seen, a print of which I’ve had in my bedroom for nearly two decades, is Carlo Dolci’s "Blue Madonna." You could be forgiven for having never heard of Dolci. He was the leading light of 17th-century Florentine painting, but that was not Florence’s strongest century. The action had shifted to Bologna and Rome, after Florence ruled the 15th and 16th centuries. There is a coy, cloying sweetness, sometimes curding into cheesiness, about much Baroque painting. But when it’s good, it is completely amazing. Caravaggio and Ribera mark the top of the heap. But Annibale Carracci, Luca Giordano, Artemisia Gentileschi, Domenichino, Guercino, Guido Reni — these are names that will be familiar to art history students, but not the general public. Dolci rings in at a level even less well-known, despite the fact that he was widely considered the best painter in Florence during his lifetime (1616-1686). And here’s the thing: I don’t actually much care for Dolci’s work. Aside from the most beautiful painting I’ve ever seen, that is. Which is why I’ve long thought that perhaps "Blue Madonna" wasn’t by him, after all.

"Blue Madonna" is normally part of the Ringling Museum of Art in Sarasota, Florida. I remember seeing it live, only once. I was on a trip with my father to see some Red Sox spring training games. It was the day I would catch a foul ball off the bat of Jason Varitek. "Blue Madonna" is the only painting I remember from the collection, but even as an early teenager, it rocked me. I bought a print and have had it with me ever since, confusing many a visitor to my dorm rooms or apartments, who see the Virgin Mary on the bedroom wall and wonder if I’m a crypto-Catholic.

For many years, I’d assumed that "Blue Madonna" must, indeed, be by “Carlino,” as he was sometimes called, but that it was his outlier. That he was a one-hit wonder of a painter, someone whom genius touched only once, the rest of his oeuvre B+ level, and not much to my taste. There are some other one-hit wonders in the art world. Grant Wood never repeated the brilliance of "American Gothic." Giambologna’s "The Appenine" and "Rape of the Sabines" are, at least in my opinion, significantly better than anything else he sculpted. Though I’m a fan of Artemisia Gentileschi, I think her only masterpiece is "Judith Beheading Holofernes." The list goes on. Perhaps this was just Dolci’s ace in a pack full of jacks?

The painting is now on display at the Davis Museum, as part of a special exhibition on Dolci, curated by Eve Straussman-Pflanzer, formerly of the Metropolitan Museum of Art. When I’d visited the Ringling Museum, "Blue Madonna" was listed as “by Carlo Dolci.” As in “case closed.” But when I received a review copy of the Davis’ exhibition catalogue, "Blue Madonna" was listed as “attributed to Carlo Dolci.” In interviews with Straussman-Pflanzer and Virginia Brilliant, a curator at the Fine Arts Museum in San Francisco, I learned that the latest scholarship suggests that "Blue Madonna," the most famous of Carlo Dolci’s paintings, was not by “Carlino” at all, but by his best pupil, Onorio Marinari. (I must admit that, though I’m a professor of art history, I had never heard of Marinari, so this came as a humbling double-surprise).

The exhibition catalogue both confirmed and shattered my thoughts about Carlino. Most of his work is technically brilliant, but I just don’t like it. And that’s okay. There is not an artwork in the world that anyone can tell you that you ­should like. Not Michelangelo’s "David," not Leonardo’s "Mona Lisa," not Picasso’s "Guernica," not van Eyck’s "Adoration of the Mystic Lamb." Most of his work I find leaves me cold and almost a little icky, the skin too porcelain, the tears too imbued with the scent of incense that clings to the nostrils in damp, under-funded 18th-century churches, with their saints a bit too waxy, realistic, gory, melodramatic. There were some of his works I hadn’t remembered having seen, but which I loved. His "Allegory of Poetry" is completely gorgeous, but then it is his most Bronzino-like painting, and Bronzino is my favorite painter, the subject of one of my master's theses, so I’m certainly prejudiced. It doesn’t look like anything else Dolci made, but would fit nicely into Bronzino’s oeuvre. Another outlier? Or another misattribution?

Whether "Blue Madonna" is by Carlo Dolci or Onorio Marinari or Father Guido Sarducci, it changes its beauty not a jot. But it does change our understanding of history, which is why it is important to get it right. As Straussman-Pflanzer told me, incorrect attributions can “detract from our understanding of the artist and have, in part, led to a misinterpretation of his important contribution to the history of art.” If it turned out that Beethoven’s 9th Symphony had actually been composed by Rossini, then it would remain just as lovely, but the jigsaw of history, or rather the Jenga of history, since later fact piles precariously upon what is understood as having preceded it, shifts, sometimes dramatically. Connoisseurship may feel less reliable, and more subject to subjectivity, than provenance research or forensic testing, when determining artistic authorship. But it remains important, because that initial “vibe” that an expert gets when seeing an object is, as Malcolm Gladwell noted in "Blink," often more correct than generations of overly cerebral rationalization.

Who painted what, or which part of what, when and where and why is all part of the mystery, the game of art history. But it has never been a field with a flexible attitude toward being proven wrong, and the public often feels wronged, when scholarship alters what they thought they knew as fact. But "Blue Madonna" remains the most beautiful painting I’ve ever seen. Attributions change. Beauty is eternal.