The weakness of the religious left: How progressive evangelicals ceded moral authority to the right wing

Liberal Protestants could be a politically powerful force in America, if they allowed themselves to be 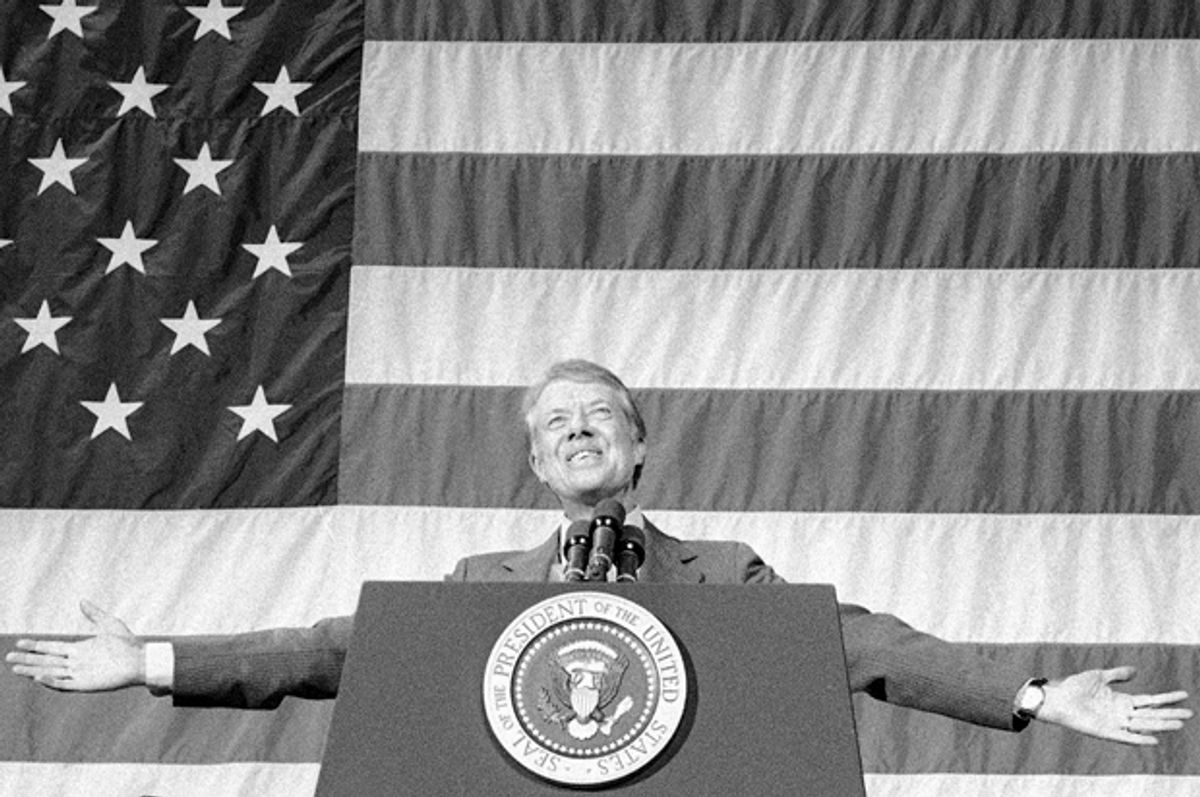 Last January Dave Brat — the Virginia Republican who snatched Eric Cantor’s congressional seat in a primary challenge, now best known for having women in his grill — claimed that Republicans "own the entire Biblical tradition." That triggered a predictable storm of partisan outrage, which mostly missed the point. Like it or not, if you take "the Biblical tradition" to mean "evangelical Protestantism," Brat was right. The GOP owns it. It may seem inevitable now, but as recently as 1980 it was anything but.

This year marks the 500th anniversary of Protestantism’s first appearance, with Martin Luther’s Reformation, and for most of those five centuries Protestantism has been spread across the political map. It’s been the default religion in the United States from the beginning, and every party has claimed its mantle. There’s a strong Protestant tradition on the right, but the greatest progressive president America never had — three-time Democratic nominee William Jennings Bryan — was also a Bible-thumping evangelical. The really surprising thing about our own age isn’t the strength of the religious right. It’s the weakness of the religious left.

Half a century after Bryan’s death, the Democrats once again nominated a bona fide, born-again evangelical for president. Jimmy Carter promised moral renewal to a post-Watergate America. His election poster — "J. C. Can Save America!" — was a joke, but not just that. A flood of political novices volunteered for the campaign. Pat Robertson, then just a televangelist without much of a political profile, interviewed Carter on his show, and later claimed, "Carter was the one who activated me and a lot of others." Unprecedented evangelical turnout in the early primaries and caucuses gave him the nomination, and, in an unexpectedly close general election, evangelical voters put him over the top. America’s new religious left was on the march.

But in 1980, 5 million evangelical voters defected to Ronald Reagan, and they’ve never come back. Lots of American Protestants have political concerns associated with the left: poverty, openness to immigrants, environmentalism. A sizable minority of white Protestants and large majorities of non-white Protestants vote Democratic. But repeated attempts to form an organized and vocal religious left have foundered on one prominent problem, which is a sign of more pervasive underlying difficulties.

That problem is, of course, abortion. Before Roe v. Wade, abortion had traditionally been a Catholic issue, but with the surge in abortions following its legalization, Protestants of all political persuasions discovered in themselves an apparently instinctive moral revulsion. It came to seem self-evident to most serious believers that abortion was murder: an epiphany which, like the nineteenth-century Protestant discovery that slavery was inherently wrong, was a matter of moral intuition rather than Biblical prooftexting. The realization energized the religious right, but it paralyzed the religious left. The Democratic party was committed to feminism for reasons of politics and of principle. So left-leaning Protestants were torn between pro-feminist and anti-abortion impulses, none more so than Carter himself. He personally disagreed with Roe and appointed an anti-abortion Catholic as health secretary. Yet he refused to campaign on the subject. The bulk of his staff were pro-choice, a position which was becoming Democratic party orthodoxy. Ted Kennedy, challenging Carter’s renomination in 1980, was a late but loud convert to the pro-choice cause. Carter was caught in the crossfire: both feminists and evangelicals felt betrayed.

Pro-life Democrats have tried to escape that crossfire but have not so far succeeded. This is not simply because they have been marginalized by the party’s pro-choice establishment. They have themselves been reluctant to press their views, for fear of undermining the feminist cause in which they also believe. They make their arguments tentatively, with nuance and moderation, which has never been a way to make yourself heard in American politics.

The abortion wars are only a sign of a deeper, systemic problem: the white Protestant left’s inability to assert its religious identity. This is often blamed either on secularist intolerance or on liberal Protestants’ shameful cowardice. The real problem is more deep-seated. What has muzzled liberal Protestants is their own commitment to inclusion and opposition to discrimination. Their aim is to serve society as a whole, rather than their own narrow confessional self-interest. The legacy of the civil-rights era and of Dietrich Bonhoeffer’s call for a "religionless Christianity" is a conviction that Christianity ought to be about self-sacrificial service. The legacy of America’s deep Protestant roots is a lingering assumption that white Protestant America cannot abandon its universal responsibilities by claiming a particular identity for itself. So although non-white Protestant churches might be politically active, they are seen as ethnic rather than religious institutions. And white Protestant America has been subsumed first into "Judeo-Christian" America, then into multi- and non-faith America, making it very hard for those on the left to unapologetically put their faith at the heart of their politics.

Take the 1980s’ campaign against President Reagan’s support for the Nicaraguan Contras. Over 80,000 Americans signed a Pledge of Resistance, vowing mass, nonviolent resistance in the event of direct American intervention in Nicaragua. The Pledge was an evangelical initiative, but its religious identity was quickly abandoned in the interest of breadth. Jews or gay rights activists couldn’t be expected to participate in campaign meetings that included Christian prayer. The Witness for Peace movement, which placed over 4,000 unarmed Americans as human shields in Nicaraguan villages at risk of Contra attack, likewise began as an evangelical initiative but was progressively broadened. It became a "prayerful, biblically based community" open to anyone who was "comfortable" with that ethos, but its very success in drawing in liberal Protestants, Catholics and secular idealists forced the dilution of its identity. "The last thing you want to be doing when people you love are getting killed," said one evangelical volunteer, "is worrying about whether your prayer is going to offend someone." Yet the fear that prayer might offend had become one of the fundamental realities with which the evangelical left has had to reckon.

The problem is not that they lack conviction, but that their convictions make it intensely difficult for them to assert their faith.

So Martin Luther King, Jr.-- a man who never hesitated to assert his religious identity -- is remembered and celebrated as the hero of a secular political cause, not for being (as he surely was) modern America’s most important Christian leader. His murder is not celebrated as a Christian martyrdom. And rightly so: He belongs not to his church but to the ages.

The year after his death, two Americans landed on the moon. One of them, Buzz Aldrin, was a Presbyterian elder, and he had brought consecrated bread and wine from his home church. Soon after the landing he privately celebrated holy communion – the first food and drink ever consumed on the moon. He wanted to broadcast the celebration, but NASA’s flight operations manager, stung by secularist criticism of the Christmas Eve broadcast of the crew of Apollo 8 reading from Genesis, discouraged him. So Aldrin invited "each person listening in, wherever and whomever he may be, to contemplate for a moment ... and to give thanks in his own individual way," and then closed down the radio to celebrate his communion.

Secularist bullying? No. Aldrin has often written and spoken about how much the event had meant to him, but also, years later, wondered whether he had been right to do it at all:

Perhaps if I had it to do over again, I would not choose to celebrate communion. Although it was a deeply meaningful experience for me, it was a Christian sacrament, and we had come to the moon in the name of all mankind — be they Christians, Jews, Muslims, animists, agnostics, or atheists.

An earnest and committed believer could now feel that he had a duty to speak in the name of all humanity, and therefore, as a matter of conscience, regret privately celebrating the central rite of his faith.

Perhaps as white Protestants on the left come to terms with the fact that their cultural hegemony is over, they will discover a way to be genuinely pluralist and inclusive while still asserting their own identity. There are some hints as to how it could happen. Protestants’ turn to politics in contemporary Latin America and Africa has been led by unabashedly moralistic campaigns to reform corrupt political cultures, and by attempts to bypass blocked government structures by building their own networks for community engagement and social action. Both of those gambits have obvious limitations. But sooner or later, our alienated, transactional and hope-starved political culture is going to find ideals of some sort that it wants to cling to.

Alec Ryrie is the author of ”Protestants: The Faith That Made the Modern World” (Viking). He edits the Journal of Ecclesiastical History and his previous books include the award-winning "Being Protestant in Reformation Britain" (2013). He is professor of the history of Christianity at Durham University in England and a licensed minister in his local church.