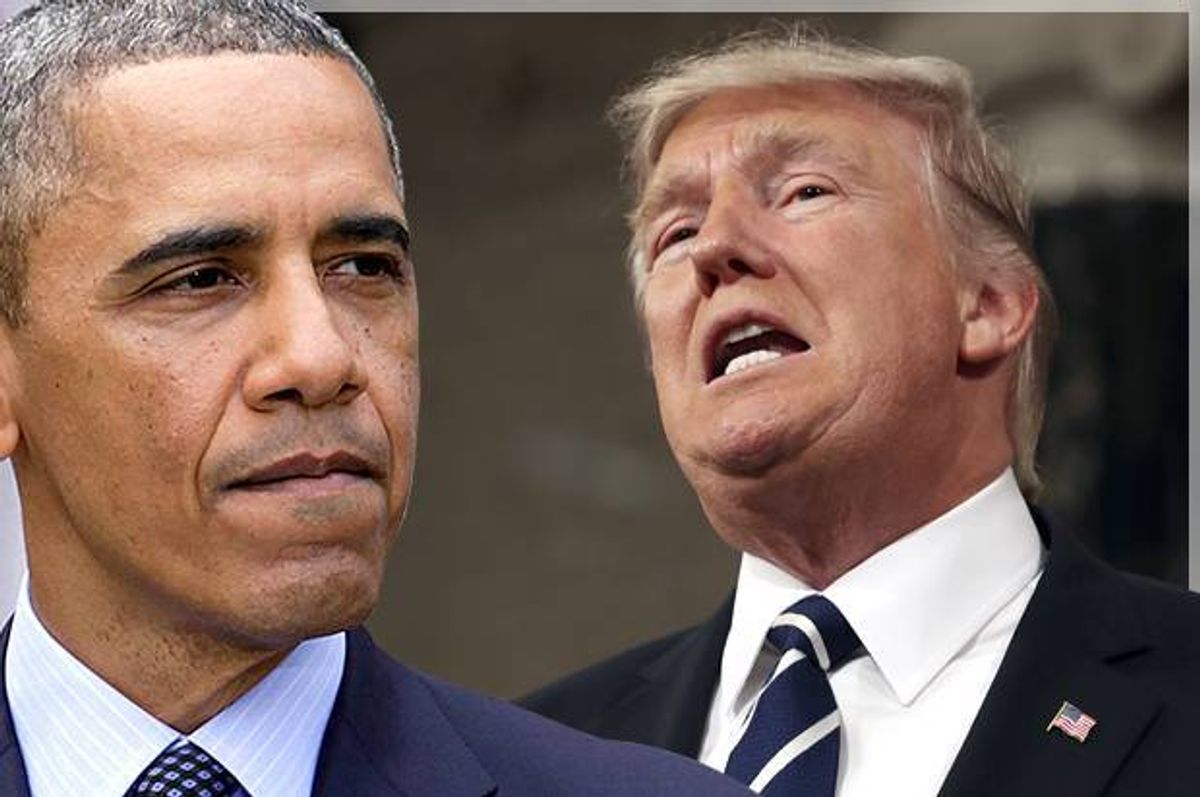 The executive order President Donald Trump signed last week to nullify Obama administration climate change initiatives was just his most recent directive to eliminate what he insists are “job-killing” regulations. “Every regulation should have to pass a simple test,” Trump declared in late February during another signing ceremony. “Does it make life better or safer for American workers or consumers?”

If that’s really the metric Trump is using, he shouldn’t target environmental regulations. Without a doubt, they make life better and safer. Not only do they protect public health and save lives, they also boost productivity and encourage investments that spur innovation and create new jobs, all at a relatively small cost to industry.

But don’t take my word for it. The facts speak for themselves.

Consider how the Clean Air Act, originally passed in 1970 and amended 20 years later, stands up to President Trump’s test. Does it make life better or safer?

Thanks to the law, emissions of six common pollutants — carbon monoxide, lead, nitrogen dioxide, ozone, particles (soot) and sulfur dioxide — plunged 70 percent on average between 1970 and 2015, according to the Environmental Protection Agency. During the same time period, the U.S. population grew 57 percent and gross domestic product jumped 246 percent.

Last December, the Office of Management and Budget reported to Congress that the benefits of the 1990 Clean Air Act amendments have far outweighed their cost. OMB estimates the strengthened law cost industry between $41 billion and $48 billion (in 2014 dollars) from 2005 to 2015 but saved Americans $172 billion to $668 billion — 3.5 to 16 times as much.

The benefits of clean air and clean water may be self-evident, but what about President Trump’s claim that environmental safeguards “kill” jobs?

As it turns out, there is little evidence that regulations — environmental or otherwise — result in significant job losses. Other factors play a much bigger role.

Before sequestration spending cuts discontinued the program in 2013, the U.S. Bureau of Labor Statistics regularly asked business owners their main reasons for laying off workers. Rarely did they cite regulations. The program’s last annual report, which documented 6,500 extended mass layoffs affecting more than 1.25 million workers in 2012, found that a drop in demand for products or services triggered 37 percent of the layoffs and the completion of seasonal work accounted for another 32 percent. Regulations, meanwhile, accounted for fewer than 0.3 percent of the workers who were let go, which was consistent with the BLS’s annual findings for the previous decade.

The BLS findings debunk the charge that environmental protections directly put a substantial number people out of work. In fact, a wealth of data accumulated over the last 40 years shows that eco-friendly standards often generate a net gain in employment, albeit a modest one.

For example, a 1994 meta study by economist Eban Goodstein of the Economic Policy Institute reviewed nine economy-wide studies on jobs and regulations published during the previous two decades. Seven of the studies concluded that environmental safeguards slightly increased aggregate employment. More jobs were created than lost, Goodstein found, in part because more workers were needed to implement pollution controls.

Economist Richard Morgenstern, a former EPA deputy administrator now at the nonprofit think tank Resources for the Future, corroborated those findings. His landmark 2002 paper in the Journal of Environmental Economics and Management analyzed the effect of environmental policies on four heavily polluting industries between 1979 and 1991 and found an overall “small but significantly positive” net employment impact of environmental standards on plastics manufacturers and oil refiners. Revisiting the issue in 2013, Morgenstern and economist Anna Belova examined more than 30 years of data for 10 industries and found no significant job losses due to regulation. On the contrary, the data showed that pollution control expenditures in many cases produced more jobs than anticipated.

Finally, Roger Bezdek reviewed more than two-dozen studies for a paper in the Journal of Environmental Management in 2008 and provided his own analysis. “Investments in environmental protection create jobs and displace jobs,” he concluded, “but the net effect on employment is positive” at both the national and state level. He also cited a key fact that the Trump administration ignores: The environmental protection sector is “a major sales-generating, job-creating industry.” Indeed, the same year Bezdek published his study, the EPA found that the U.S. environmental industry supported 1.7 million jobs, generated some $300 billion in revenue, and exported $44 billion in goods and services.

Economists explain that environmental safeguards rarely lead to job losses in large part because they are relatively cheap to implement. As Morgenstern and Belova have pointed out, “Even for the most heavily regulated manufacturers, such as petroleum refining, the share of revenue devoted to pollution abatement costs has not exceeded 2 percent over the last 30 years.”

Major U.S. oil and gas companies concur with that assessment. “In annual reports to the U.S. Securities and Exchange Commission,” Reuters recently reported, “13 of the 15 biggest U.S. oil and gas producers said that compliance with current regulations is not impacting their operations or their financial condition.” ExxonMobil spent only 2.24 percent of its gross revenue in 2016 to comply with environmental standards, which covered new equipment, new facilities, fines and staffing. ConocoPhillips spent 2.57 percent, while Chevron spent only 1.91 percent.

So, is there any truth to President Trump’s claim that cutting environmental safeguards will help coal miners? Here again, the numbers belie the rhetoric.

Yes, the number of people working in the coal industry has declined dramatically over the last three decades, but not because of stricter pollution controls. The main culprits have been automation, higher productivity, and a shift from underground mining to surface mining and mountaintop removal, which require significantly fewer workers. Consider that, in 1985, it took 169,000 workers to mine some 884 million tons of coal. In 2015, it took only 66,000 workers — 60 percent fewer — to produce 897 million tons. Combine that increased productivity with cheap natural gas, aging coal plant closures, lackluster electricity demand, and the explosive growth of renewables, and it’s clear that coal — once king — has been deposed by market forces. As recently as 2008, coal generated about 50 percent of U.S. electricity. Its share today is just 30 percent.

Regardless, Trump has repeatedly vowed to save the coal industry. Supposedly toward that end, he signed a bill in mid-February repealing the Stream Protection Rule designed to protect waterways from toxic mine waste, and earlier this week he issued an executive order rescinding the Clean Power Plan, which aimed to cut coal-fired power plants’ carbon emissions. In both cases, his purported rationale is to retain — and bring back — coal industry jobs. And in both cases, coal industry apologists have been peddling alternative facts.

During a February 19 interview on ABC’s "This Week," for instance, Rand Paul, the junior senator from Kentucky, a major coal-producing state, claimed the Stream Protection Rule “would have cost 77,000 jobs in the coal industry.” Paul based his projection on an October 2015 study prepared for the National Mining Association, an industry trade group.

The American Action Forum, a conservative advocacy group, predicted even bigger job losses from the Clean Power Plan. A paper it issued in August 2015 claimed the rule would eliminate 125,800 coal industry jobs. In May 2014, just before the EPA announced the proposal to cut power plant carbon emissions, Sen. Mike Enzi of Wyoming, the top U.S. coal producer, was more apocalyptic. He accused the Obama administration of trying “to kill coal and its 800,000 jobs.”

These layoff projections bear no relationship to reality. How could the coal industry lose 77,000, 125,800 or even 800,000 jobs when the BLS calculates that it directly employs just 50,000 people? You could fit them all into Yankee Stadium. Even when you include industry contractors, which the Mine Safety and Health Administration currently estimates at 27,700, the numbers the coal industry and its friends in Congress toss around are simply ludicrous.

Government and independent analyses tell a very different story, one that is consistent with previous studies. When the U.S. Department of the Interior wrote the Stream Protection Rule, the agency commissioned a report on its impact. Published last November, the report concluded the rule would result in a small net increase in employment. It found that an average of 124 direct jobs per year would be lost, but that coal companies would have to hire an average of 280 employees annually to comply with the rule’s requirements.

The Clean Power Plan, meanwhile, was projected to create tens of thousands of new jobs in the clean energy and energy efficiency sectors. An April 2015 study by economists at the University of Maryland and the Industrial Economics consulting firm — one of several studies arriving at similar conclusions — estimated that the Clean Power Plan was likely to increase overall U.S. employment by 273,000 jobs by 2040.

Given the preponderance of the evidence, it’s long past time to retire the stale argument that environmental protections hurt the economy, and getting rid of them at this point would have little chance of stopping the coal industry’s downward spiral. President Trump can boast all he wants that he can bring back coal jobs by scrapping the Stream Protection Rule, the Clean Power Plan and other environmental rules, but even CEO Robert Murray of Murray Energy, the nation’s largest privately held underground coal mining company, acknowledges that it’s a fool’s errand.

In a recent interview with the Guardian, Murray conceded that many coal jobs were lost to automation and competition from natural gas and renewable energy, not environmental regulations, making it unlikely that Trump can do much to restore a significant number of them. Murray said that when he was at the White House last month for the signing of the bill repealing the stream rule, he suggested that President Trump “temper his expectations” about reviving coal jobs. “Those are my exact words,” he told the Guardian. “He can’t bring them back."