Trump's Syria misadventure: If this all goes wrong, media must shoulder the blame

An utter lack of skeptical inquiry and way too much jingoistic cheerleading: Does any of this sound familiar? 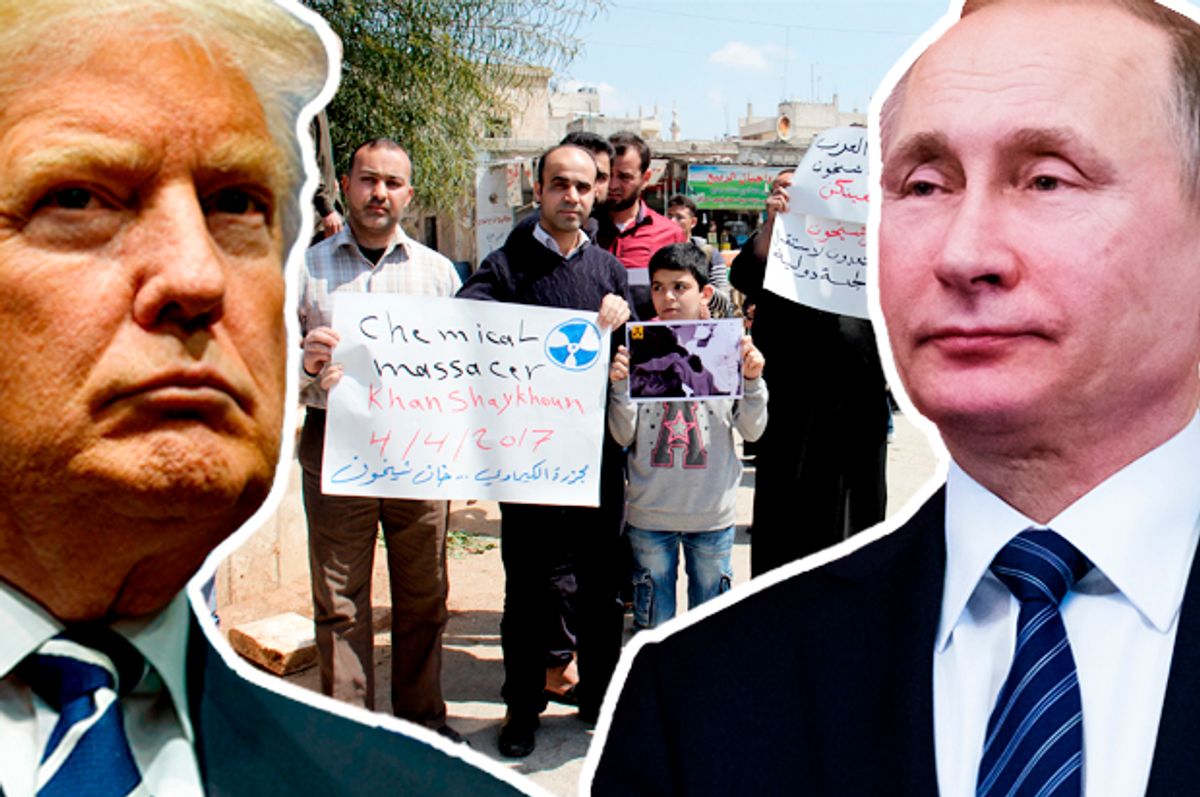 On Thursday night, President Donald Trump ordered the launch of 59 Tomahawk missiles at the Shayrat army base in western Syria near the city of Homs.

Democrats cheered. Republicans cheered. It was a uniting moment. On MSNBC, Brian Williams was almost teary-eyed, waxing lyrical about the beauty of it all. On CNN, Fareed Zakaria hailed Trump’s moral awakening, arguing: “I think Donald Trump became the president of the United States” that night.

The strike was a response to an alleged chemical weapons attack by Syrian president Bashar al-Assad’s forces in the town of Idlib last week. I say “alleged” because as yet there has been no official investigation into the incident — and serious experts are urging caution before action (to little avail).

What’s needed is an investigation, because there are two possibilities for what happened. One is the American version, that Assad dropped chemical weapons on this locality. The other version is that an ordinary bomb was dropped and it hit a munitions dump, that jihadis were storing chemical weapons. We don’t know which of these two possibilities is the correct one. Remember the run-up to Iraq; the experts, the intelligence agencies, the politicians were convinced that Saddam had weapons of mass destruction. They produced reams of evidence; photographs, diagrams. It was all wrong — and it’s possible that they’re wrong in this instance, as well.

Jerry Smith, a former official at the Organization for the Prohibition of Chemical Weapons made a similar statement on the UK’s Channel 4 news on Friday: “We need to be very conscious of all playbooks that are being put out there at the moment. I think it’s very premature if we start dismissing one accusation or another,” he said.

Asked if it was possible that anti-Assad rebels had been storing chemical weapons, Smith said it was not at all out of the realm of possibility. He also made a point of quashing the suggestion made by some that sarin gas would have been consumed and destroyed, preventing it from spreading, in the case of a conventional weapons hit on a chemical weapons depot.

When a consensus narrative forms quickly, it’s important to give some airtime to dissenting voices. That is not happening, on this issue as on many others. Politicians, journalists and the vast majority of analysts have collectively decided they will not even entertain the possibility that Syrian rebels — some of whom are linked to al-Qaida — could have been hiding chemical weapons, despite the fact that the UN accused the rebels of using sarin in 2013.

The claim that Assad used chemical weapons is being stated as conclusive fact. Largely, the basis for this argument is that Assad is a bad guy, therefore he probably did it. While it’s tempting to leave it at that, this is not a strong enough argument — and it’s most definitely not a good enough reason to head merrily into another war.

Two days before Trump’s attack, Russan President Vladimir Putin’s spokesman Dmitry Peskov was asked what would happen if the U.S. were to hit Assad. He said it was an “apocalyptic premise.” Speaking again after the strike, Peskov said that Trump's decision "deals significant damage to U.S.-Russia ties, which are already in a deplorable state.”

Responding to Trump’s strike on Syria, Moscow suspended its flight safety memorandum with the U.S. and pledged to strengthen Assad’s air bases. Putin called the move “a violation of international law” and said it would further the interests of terrorists. Then the Kremlin sent a warship toward the two U.S. Navy destroyers that had launched the attack on Shayrat from the Mediterranean.

That was a relatively subdued reaction from Moscow, but the dangers of a possible U.S.-Russia clash over Syria are real, which is one more reason to think twice before cheering impulsive airstrikes that have little to do with American national security.

The question now is why Trump did it — and what his plans are for the future.

Those who have scurried too far down the rabbit hole of Trump-Putin conspiracies believe that Putin gave Trump permission to attack his long-standing ally, whom he has spent years (and truckloads of money) propping up. But there are more realistic scenarios on the table:

Maybe this strike was a one-off, a politically advantageous move designed by Trump’s team to work simultaneously as a show of force to Assad and Putin, while proving to Democrats that he is no Kremlin agent. Or perhaps Trump has had a serious change of mind on the U.S. role as the world’s policeman, and is suddenly serious about regime change in Damascus.

The first option is more likely. The White House has played down talk of further action against Assad. But things can change fast.

If Trump does wade further into this conflict and it goes bad -- as is entirely likely -- the media will bear some serious responsibility. First for pushing the Russia story beyond the bounds of sanity, forcing Trump to prove his independence and assert his masculinity, and second for refusing to engage in any skepticism over the catalyzing moment for Trump’s attack on the Syrian base; a mistake which is all too reminiscent of the lead-up to Iraq.