Salon’s author questionnaire: "Can it be true that even as I despised them, they intrigued me and thus opened new holes up in my imagination?" 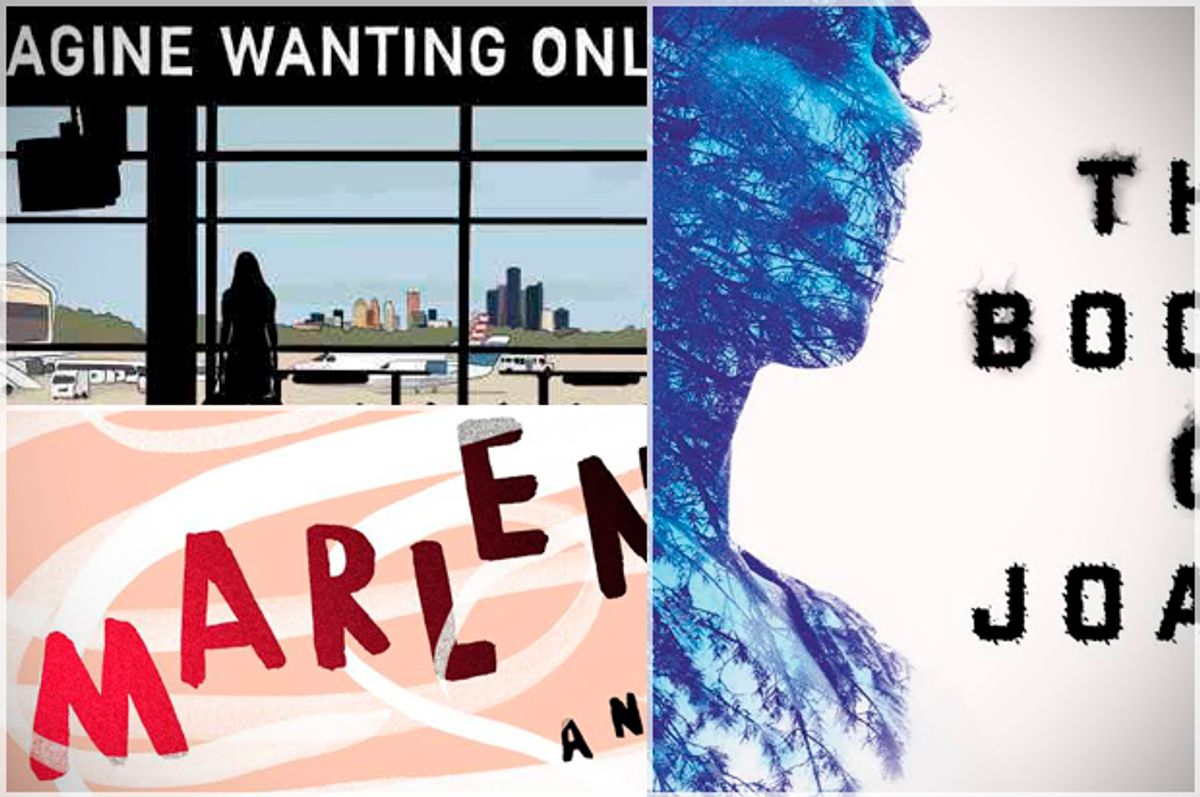 For April, I posed a series of questions — with, as always, a few verbal restrictions — to five authors with new books: Julie Buntin (“Marlena”), Fiona Maazel (“A Little More Human”), Olivia Sudjic (“Sympathy”), Kristen Radtke (“Imagine Wanting Only This”), and Lidia Yuknavitch (“The Book of Joan”).

BUNTIN: A defining regret, snow in summer, that foggy windshield feeling after too many glasses of wine, having a female body, wanting to go home, teenage girls, the difference between some money and none.

MAAZEL: Superheroes. Neural prosthetics. Dementia. A very addictive DRUG and a spooky hospital in Denmark. Also: Self-knowledge and memory. Probably more about the latter two than the rest.

SUDJIC: Girl crushes. Smart cities. Symmetry. Surveillance. Definitions of “Sympathy.” The creepy feeling that, through metadata, algorithms etc, the web can predict your every move, shape your choices, identity, and trap you. Also paranoia.

YUKNAVITCH: The novel is located at the edge of geocatastrophe, unwriting the tropes of the war story, the love story, and the god story.

MAAZEL: Brett Favre (I kid you not). Also: Science.

SUDJIC: 17th-century medicine and magic. Japan. The missing Malaysia Flight MH370. The 2011 Tsunami in Japan. The discovery of the Higgs particle. Tinder and other geolocational dating apps. Google Search. Wikipedia.

YUKNAVITCH: Joan of Arc, the person, her body, her story. My other influences came from present-tense tensions that are all man-made: The bulbous exaggeration of celebrity culture and reality tv, how consumer culture has subsumed identity, and the choices we’ve already made that further power at the expense of the planet and existence.

BUNTIN: How inconvenient and expensive it is to travel to northern Michigan, my middle sister, line breaks and white space, the taste of a martini, the feeling of having escaped something terrible, cold weather, that I was once fifteen and never will be again, handwritten notes.

YUKNAVITCH: Climate change, the horror of celebrity culture and capitalist consumerism, art and identity under attack, social and political danger, war as serial.

BUNTIN: A colossal break-up, the loss of the yellow kitchen, moving into a room (old coat closet maybe?) outside of an apartment and sleeping on the floor on a left-behind twin mattress, constantly forgetting my keys when getting up in the night to go to the bathroom, and then, in revisions, falling in love, teaching myself to run long distances.

SUDJIC: I don’t ‘despise,’ more despair over the perceived problem that my female narrator might be unlikeable or that it’s hard to feel sympathy for her. So much has already been said about this by other writers but I’ll just add: “LOL,” and “my title.” I also let most comments on style slide over me. I wrote in the voice of my narrator, who, in publishing a “confession” online, is still in the grip of a delusional obsession with an author, one who also uses her own life in her stories, and who she is trying to imitate. I wish that voice had been spare and sane, and had sounded like Lydia Davis, but it didn’t.

YUKNAVITCH: Can it be true that even as I despised them, they intrigued me and thus opened new holes up in my imagination? When a reviewer called my character Dora a “tapeworm.” I thought about that for a whole year. A tapeworm is a parasitic flatworm, the adult of which lives in the intestine of humans and other vertebrates. It has a long ribbonlike body with many segments that can become independent, and a small head bearing hooks and suckers. Ew. And: When a reviewer claimed The Small Backs of Children, a story about a girl who survives a warzone by becoming a painter and saving her own life, was “missing a beating heart.” Since the story is based on the death of my daughter, and since I put my entire heart into writing it (you know, like all writers do), that one knocked around my chest for a good long time.

YUKNAVITCH: Professional underwater sea mammal. Is that a career? It should be. OR: Professional pillow fort inhabitant. OR: Painter. True story. I wanted to be a painter. I still do.

BUNTIN: I love my day job at Catapult. But if that was off the table, a neurologist.

RADTKE: I think I'm good at digression. I'm working on dialogue, and drawing figures in motion is still a challenge.

SUDJIC: My debut novel is my only clue, I didn’t write before. While I was writing that I felt like I’d created an intricate, layered puzzle, at the same time as managing to have a storyline over the top that required minimal effort from the reader. I think I’m good at mixing high and low in that sense. I’m desperate with my next one to break out of the confines of the first-person narrator (though it was crucial to the theme and structure of the book to have that limited, unreliable perspective). I feel a bit shaky with an invisible, omniscient narrator at the moment.

YUKNAVITCH: I suspect that my strong suit has to do with creating image and lyricism in my prose — I lean in the direction of poetry and painting and music. I’d like to get better at both that, and, radical prose innovation. But everyone else probably wishes I’d get better at plot. Ha.

BUNTIN: I want to know what everyone has to say about everything, so I'm not sure I really contend with this hubris.

RADTKE: I don't, I just make the work anyway.

MAAZEL: I accept that the hubris is weighted down by a massive amount of self-loathing. Hubris allows a writer to write. Self-loathing makes her re-write.

YUKNAVITCH: Well I don’t really think anyone has or should have any interest in what I have to say about anything. Why should they? I think in place of that idea I inhabit something more like a river that leads to an ocean. That’s an idea I can live with. The there is an ocean out there which is the larger motion of writing/storytelling/making art, and my job is to find the river or tributary to join, to bring my puny sediments of a life along the way water carries pieces of earth. I think my contribution is tiny. And yet not nothing, since we need all of us to make rivers that lead to the ocean of all artmaking. Be as water. Bruce Lee said that. I prefer Bruce Lee to the hubris of The Writer in America.