Will Bill O'Reilly be fired amid the latest sexual harassment scandal? Signs point in both directions 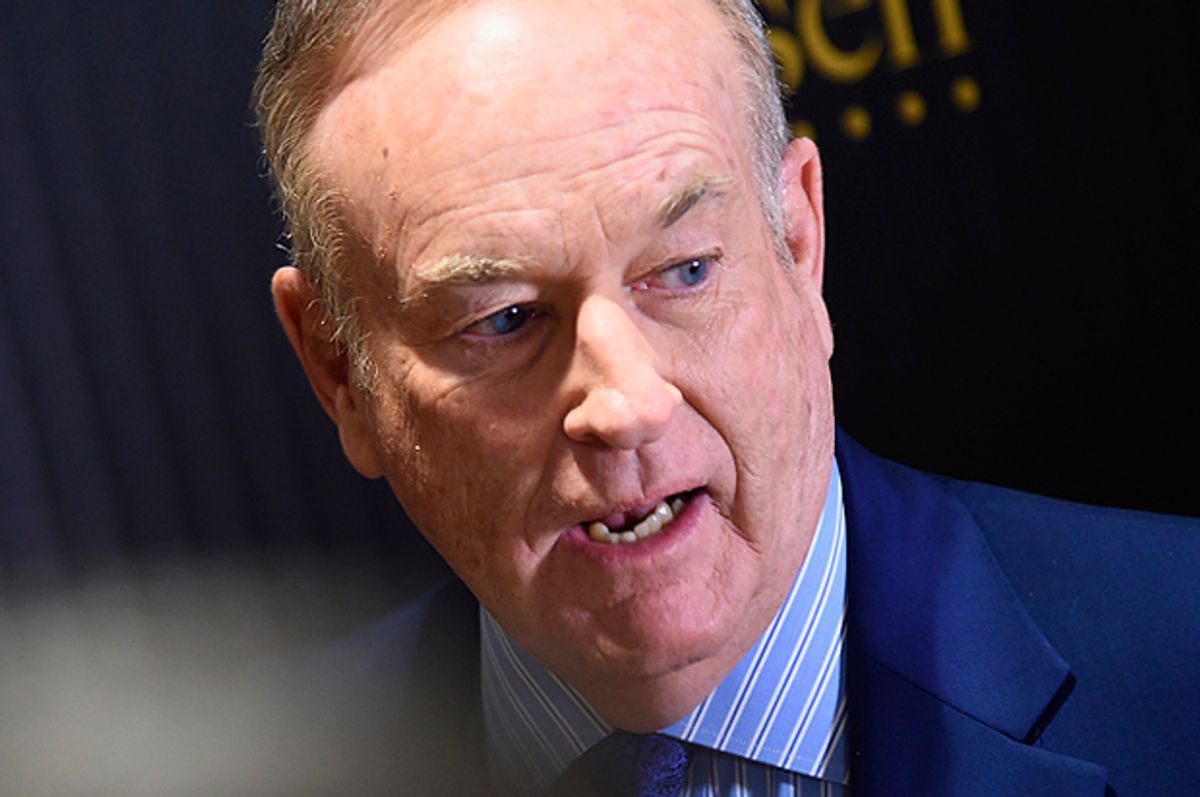 This story has been updated since its initial publication to reflect additional advertisers pulling out of "The O'Reilly Factor” and to include a new comment by Rashad Robinson, director of Color of Change.

Bill O'Reilly, host of the top-rated Fox News show, has once again embroiled the cable news outfit in a scandal. Even so, O'Reilly may be able to survive this, as he has on other occasions when he was accused of outrageous or offensive behavior.

O'Reilly’s current troubles began after The New York Times reported on April 1 that since 2002, he and Fox had paid out at least $13 million to women who had accused him of sexually or verbally harassing them. That long history of payouts offers evidence that O'Reilly may be able to weather the current media storm.

That’s because the business model of Fox News is dramatically different from those of its cable competitors, CNN and MSNBC. While the latter channel is known for its left-leaning prime-time lineup, MSNBC’s audience is more centrist than that of the New York Times, "The Daily Show," NPR and The Washington Post, according to a 2014 study by the Pew Research Center.

As CNN, MSNBC and the major broadcast news counterparts are striving for a large, center-left audience, Fox News has essentially cornered the market on conservative viewers. While some moderates do tune in, the most loyal FNC viewers are conservatives who largely distrust other media outlets.

The net effect of Fox fans’ isolation from other media is that news about the various accusations against O'Reilly (he has denied all of them) simply has not filtered down to his loyal fans.

Orlando Sentinel TV writer Hal Boedeker provided a perfect example of this in a recent column discussing how his father, a regular “O’Reilly Factor” viewer, had not even heard about the millions in payouts to O'Reilly accusers.

Although it might not be surprising that an older person in rural Missouri had not heard of the allegations against O'Reilly, on the same day (April 5) that Boedeker published his column House Speaker Paul Ryan also said he had never heard them.

“I don’t even know what you’re talking about,” Ryan said when he was asked for a comment about the allegations in an interview. “I don’t read the New York Times all that often.”

Given O'Reilly fans’ low opinion of the mainstream media, it appears some of them might have become more interested in tuning in. According to USA Today, “O'Reilly Factor” ratings for Monday and Tuesday of last week increased 14 percent compared to the week before.

What’s different about O'Reilly’s problems this time around is that his allegedly inappropriate behavior may be causing problems for Fox News’ parent company.

Rupert Murdoch, the chairman and founder of 21st Century Fox, has long wanted to exercise contractual rights to buy up all the shares in Sky Media, a London-based media conglomerate in which he already owns a majority stake.

This is Murdoch’s second attempt at buying out the other Sky investors. In 2011 he canceled a previous effort after one of his British newspapers was revealed to have spied on murder victims, a scandal that led to the complete closure of the publication and months of horrendous coverage for Murdoch’s firm just as the British regulatory body Ofcom was deciding whether Fox would be a “fit and proper” owner for Sky.

Further complicating the Ofcom review of Murdoch's current Sky takeover bid is a possible criminal case that may be brought against Fox News executives in New York for allegedly refusing to disclose millions of dollars in payments to sexual harassment claimants in mandatory public filings to the U.S. federal government and investors.

Another major challenge facing O’Reilly this time is that he has become the target of a progressive campaign to encourage advertisers to boycott his program. It's an effort reminiscent of an earlier campaign that, by Fox News’ admission, contributed to the cancellation of Glenn Beck’s popular program on the channel.

That prior success has prompted Color of Change, the left-leaning group that led the effort to get advertisers to boycott Beck, to begin targeting O’Reilly’s program.

“As horrifying as these new revelations of sexual harassment are, no advertiser can claim it’s the first time they’re hearing about O’Reilly’s long, documented history of sexism and racism,” Rashad Robinson, the group’s director, told Salon.

“Now, it’s up to companies like Microsoft, Delta and IBM to finally take a stand against this deplorable behavior," Robinson continued. "Fox News will continue shielding O’Reilly unless his advertisers hold the network’s feet to the fire and pull their money from his show.”

O'Reilly has also been targeted by a newer, Twitter-based group of anonymous advertising insiders who call themselves the Sleeping Giants. The group has been encouraging anyone and everyone to contact companies via Twitter and urge them to pull advertising dollars from O'Reilly’s program.

“Our campaign, from the start, has been about making bigotry unprofitable,” one of the group’s representatives told Salon via a Twitter direct message. “Bill O'Reilly and Fox News have been making huge profits while degrading women and minorities, so it more than made sense for us to take action. Advertisers should, in no way, want to support this behavior.”

Thus far, the public pressure has caused more than 60 companies to announce they will no longer advertise on “The O'Reilly Factor.” While that’s surely an embarrassment for the program’s pugnacious star, the overwhelming number of the companies who have pulled out from O'Reilly’s show have merely reshuffled their spending to other Fox News programs. This means that Fox News has not lost nearly as much money from the boycott as it might seem.

The campaign is still relatively young, however. If it persists, things might get a lot worse for O’Reilly. For now, however, Baltimore Sun TV critic David Zurawik probably has the correct reading of the situation:

Unless the advertiser boycott catches wildfire, O'Reilly will weather this latest storm just like he withstood the serious challenges in 2015 to claims he made about his career as a correspondent at CBS.

Most of the advertisers who are fleeing his show are still advertising on Fox. And Fox makes a major chunk of its revenue from fees paid by cable operators — rather than from commercials. It's going to take a lot more than 40, 50 or 100 advertiser defections to make a dent in the Fox News cash flow.

The other thing O'Reilly has in his favor is that his former rival Megyn Kelly left the network for NBC, meaning that replacing the host of Fox News' most-watched program would be a much riskier endeavor for company. In the past two years alone, O'Reilly's show brought in an estimated $446 million in revenue for the channel.

His worth is even greater than that when you consider that “The O'Reilly Factor” is the centerpiece of the Fox News prime-time lineup. When you combine the revenue of the programs that appear around O'Reilly’s (“The First 100 Days” earlier in the evening, and “Tucker Carlson Tonight” and “Hannity” afterward), replacing the scandal-plagued host could put nearly $1 billion worth of annual revenue on the chopping block.

That’s why Fox is employing the same time-honored strategy it has used to deal with O'Reilly’s previous scandals: keeping quiet and hoping it all goes away.

Will this strategy work this time? To be determined.