"You will pay": Season 3 of "Better Call Saul" accelerates into the dark

The new season introduces us to Saul Goodman, but maybe we should begin searching for directions to Omaha 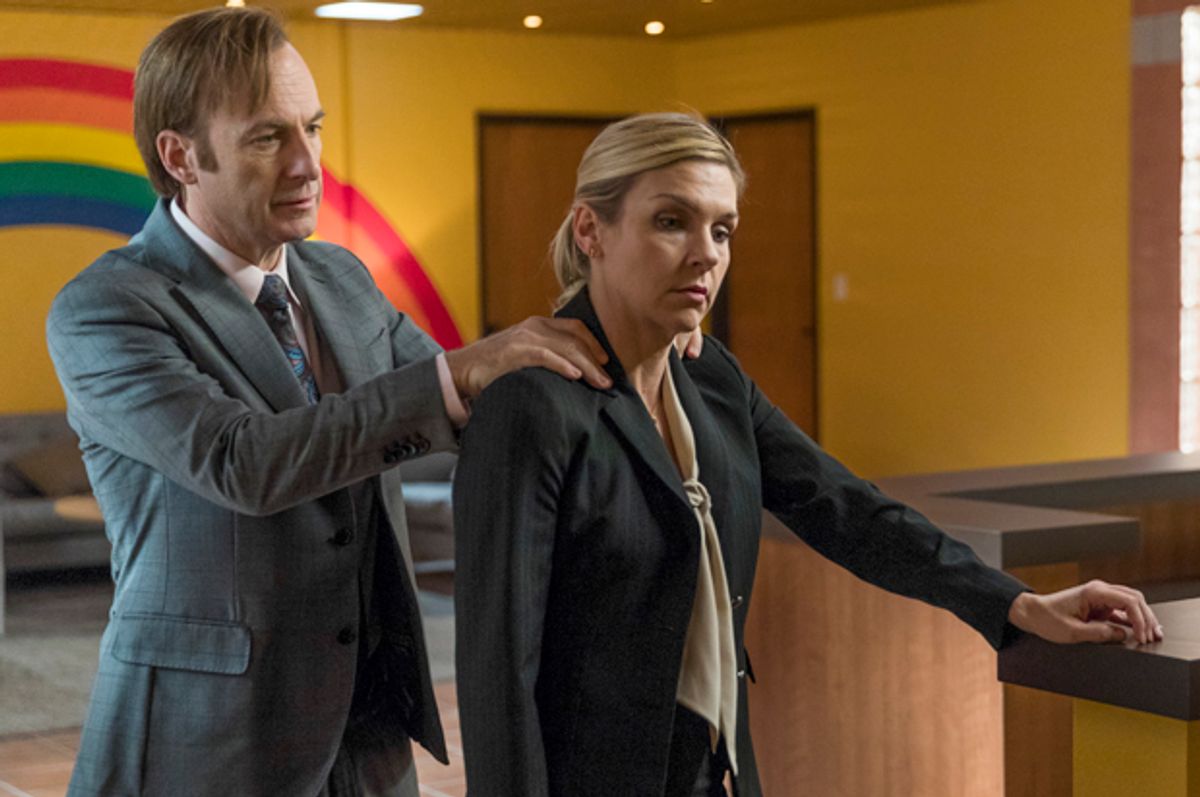 While AMC's “Better Call Saul” is predicated upon revealing the factors that led to burgeoning lawyer Jimmy McGill’s transformation into criminal attorney Saul Goodman, maybe we should spend more time thinking about how he became Gene, the deflated manager of a Cinnabon in Omaha.

Colorless scenes from Gene’s life open each new season of “Better Call Saul,” and when its third debuts Monday at 10 p.m., the dutiful pastry chain employee is putting the frosting on another day that looks just like all the others. At first. While he’s eating his humble lunch a moral quandary drops into Gene’s lap, and he handles it in a way that would make Slippin’ Jimmy and Saul Goodman bow their heads in shame.

Those bleak “Gene from Omaha” fast-forwards show what’s lurking down the road for Bob Odenkirk’s struggling ne’er-do-well Jimmy McGill. One day, he’ll be Saul Goodman. Afterward — and after Walter White — he’ll devolve into a mustachioed man in a flimsy apartment, a lonely, paranoid shell bled of any aspirations.

This new vignette, however, demonstrates how far this man of many names has strayed from his old lives. In “Better Call Saul,” Jimmy McGill is doing his best to build his legal career, but he can’t let go of the skills he picked up when he was Slippin’ Jimmy, the con man from Cicero, Illinois.  Aspects of both Jimmys blossom within Saul Goodman, criminal attorney. Gene’s may not even be the final identity that Jimmy McGill will inhabit, but his third season appearance certainly hints at a melancholy ending for the show.

No need to worry about that right now. “Breaking Bad” took five seasons to tell Walter White’s story, so it’s safe to assume Odenkirk’s crooked attorney Jimmy McGill, the linchpin of “Better Call Saul,” is still in the opening days of his less-than-illustrious legal career. The paint is still drying in his office’s lobby, in fact.

“Better Call Saul” is consistently one of television’s best dramas, owing to its superior writing and its cascade of stylistic flourishes reminiscent of auteur cinema. Co-creators Vince Gilligan and Peter Gould are the rare kind of television producers that take as much care in using stark visuals, ambient sound and weighty silence to tell the story as they do with the scripts.

Writing to our senses as well as the characters enmeshes the viewers in Jimmy’s world, but Odenkirk’s pathos-soaked scoundrel makes the show breathe and kick. His Jimmy is a man who still believes he has a chance, who still trusts that his family has his back, and thinks that he can get away with tiny misdeeds as long as they don’t hurt anyone. Viewers who have seen “Breaking Bad” have seen into Jimmy’s future, and we know how pathetically wrong he is.

At present Odenkirk’s character still has the potential to be a decent lawyer, and he proved that by landing a cushy job at a respectable boutique law firm. But the thrills of the con game are always calling Jimmy, and to his detriment, he keeps on answering that phone.

Odenkirk told Variety that this is the season viewers will meet the man Jimmy will become, Saul Goodman, for the first time. And as has been previously reported, Giancarlo Esposito is joining the cast to reprise the reserved, calculating Gus Fring. Maybe these details mean the peak of the series’ plot arc is in sight, and following these next 10 episodes, we should expect a downward slide toward Gene in Omaha.

Regardless of where we are in this strange voyage, it’s obvious that Gilligan and Gould are accelerating Jimmy toward his grimmer future. The third season opens with a heavier atmosphere leaning more into the drama of the tale, so much that one may forget that it was originally conceived as a half-hour sitcom.

Plans change as much as people do, and in shaping the chameleonic narrative of “Better Call Saul,” Gilligan and Gould have created a fascinating examination of moral definitions. Its close look at the past of Mike Ehrmantraut (the always excellent Jonathan Banks), another character first introduced in “Breaking Bad,” provides a cogent example of this. Ever the pragmatist, Mike understands that criminals can be good men, and that many law-abiding citizens can leave a wide trail of malevolence in their wake.

Jimmy is still figuring this out, putting him at the mercy of his brother Chuck (Michael McKean). Chuck has sabotaged Jimmy many times. Nevertheless, Jimmy has remained loyal, although he pulled an act of revenge on Chuck that impacted his professional reputation. As the third begins, Jimmy has no idea that his brother intends to repay him with steep interest. If “Better Call Saul” is a series about cause and effect, the tragedy is that Jimmy may be the last one to understand that.

As the season begins, Jimmy’s painting a rainbow on the wall to charm his elderly clientele and, in part, to cheer up his colleague Kim Wexler (Rhea Seehorn) who is sharing the space as she builds her own independent practice.  But this detail masks the bleaker direction in which their lives ahead are heading.

Chuck wants to eliminate any threat that Jimmy McGill poses to Chuck’s firm Hamlin, Hamlin & McGill, or to his own legacy. One could surmise that part of that means eliminating any connection to his professional name. Family makes the absolute worst of enemies because, in many respects, they know how to break down your defenses and obliterate you exactly where you live.

And Chuck, in spite of his crippling psychological illness that manifests as “electromagnetic hypersensitivity,” has always been a graver peril to his brother than any gangster or drug kingpin could ever be. When Chuck calmly tells Jimmy, “you will pay,” that line holds an extra chill for that viewer who has a better idea of what that implies for Jimmy than he ever will. We’ve seen what’s in store for Jimmy, rendered in unforgiving black and white, and it doesn’t look sweet at all.