What happened to #Resist?: Some rush to praise Trump for his strikes on Syria while turning on a fellow Democrat 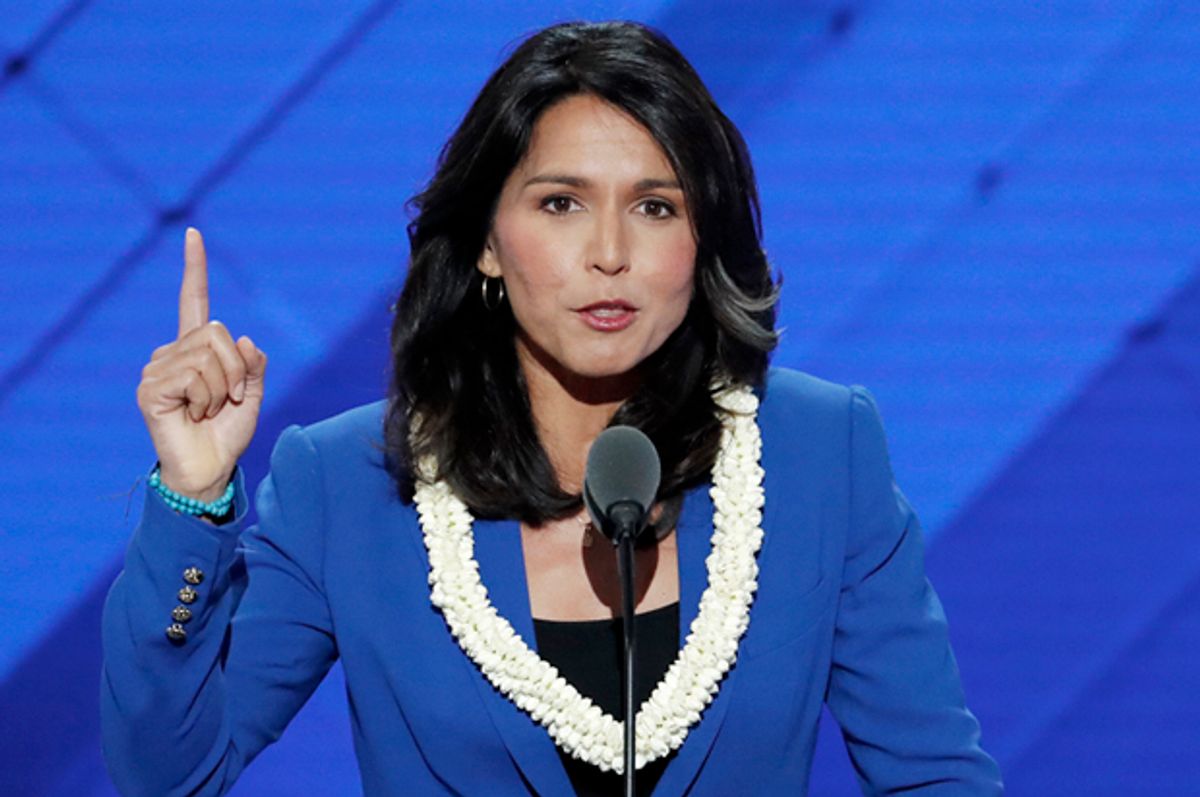 This is an entirely reasonable position -- but apparently, it’s a big problem for some Democrats.

Neera Tanden, head of the Center for American Progress and former Hillary Clinton adviser, tweeted a link to Gabbard’s appearance on CNN with Wolf Blitzer last week and essentially called out the congresswoman’s constituents for keeping her in office.

Former Democratic National Committee chairman Howard Dean responded to Tanden’s tweet to argue that Gabbard is "a disgrace" and “should not be in Congress."

Tulsi Gabbard is an Iraq war veteran. She put her life on the line for her country. Democrats like Howard Dean and Neera Tanden smearing her name for the crime of skepticism is the real disgrace.

Of course, the neo-cons are getting in on the action, too. The Wall Street Journal’s Bret Stephens, on Twitter, referred to Gabbard’s skepticism as “Dictator Apologetics."

So what's Gabbard’s high crime? Simply wanting solid evidence before getting tangled up in a new war.

Gabbard has been consistently critical of U.S. policy in Syria. A year ago, speaking to Blitzer on CNN, she expressed concern over efforts by the CIA to overthrow the Assad government. She argued that by working to oust Assad, the U.S. has been strengthening the position of Islamic extremists — both Islamic State militants and Al-Qaeda-linked rebel groups — which Assad’s forces having been fighting against. Those extremists, she said, “will walk in and take over all of the country of Syria” if Assad’s government falls. Gabbard also took issue with the U.S. supplying weapons to rebel factions in Syria:

US arms are getting into the hands of our enemy, Al Qaeda, Al Nusra, other groups, Islamic extremist groups who are our sworn enemy. These are the people who attacked us on 9/11 and who, supposedly, we’re trying to defeat — and yet at the same time supporting them with these arms to overthrow the Syrian government — you can’t defeat your enemy if you’re arming them and helping them at the same time. It makes no sense to me whatsoever

In January, Gabbard went on what she called a “fact-finding mission” to Syria, where she met with Assad. The news of that trip was met with predictable outrage, but Gabbard defended herself: “Whatever you think of President Assad, the fact is that he is the president of Syria. In order for any possibility of a viable peace agreement to occur, there has to be a conversation with him.”

Since last week's missile attack, the Hawaii congresswoman has been tweeting using the hashtag #ResistTrumpsWar — a clear dig at Democrats who claimed to be part of the anti-Trump “Resistance,” but who are now fully supportive of what she called his “reckless and short-sighted” airstrikes.

And Gabbard is far from the only one expressing skepticism about the culprits of last week's chemical attack.

Republican Rep. Thomas Massie cast doubt on the chemical attack story before Trump took military action against Assad’s airfield, prompting a visible double take from CNN’s Kate Bolduan, who shook her head in disbelief. Bolduan responded by asking if Massie was “more inclined” to believe “what Bashar al-Assad is saying and what the Russians are saying?”

The problem with framing the Syria problem this way, however, is that it gives people two options: Be patriotic and believe U.S. intelligence officials unquestioningly or side with Assad and the Russians.

Given the recent climate of Russia-related hysteria, this kind of guilt-tripping works pretty well.

Yet many experts have cautioned that it is possible that Assad hit a rebel munitions dump with a conventional bomb leading it to appear as though he had intentionally used a chemical bomb. Additionally, the New York Times reported last year that ISIS had used chemical arms “at least 52 times in Syria and Iraq." In 2013, the United Nations even accused anti-Assad rebels of using sarin gas.

The problem now is that a real investigation into the most recent chemical weapons incident is likely impossible given the strict parameters of debate Democrats have imposed. Trump’s administration will never be able to admit that they acted hastily if any inconvenient evidence were to ever come to light.