Global elites strike back: Have Jared and Ivanka defeated Bannon — and turned Trump into a cuckservative?

The White House is at war with itself: Who will win — Wall Street elites or neoconservative chicken-hawks? 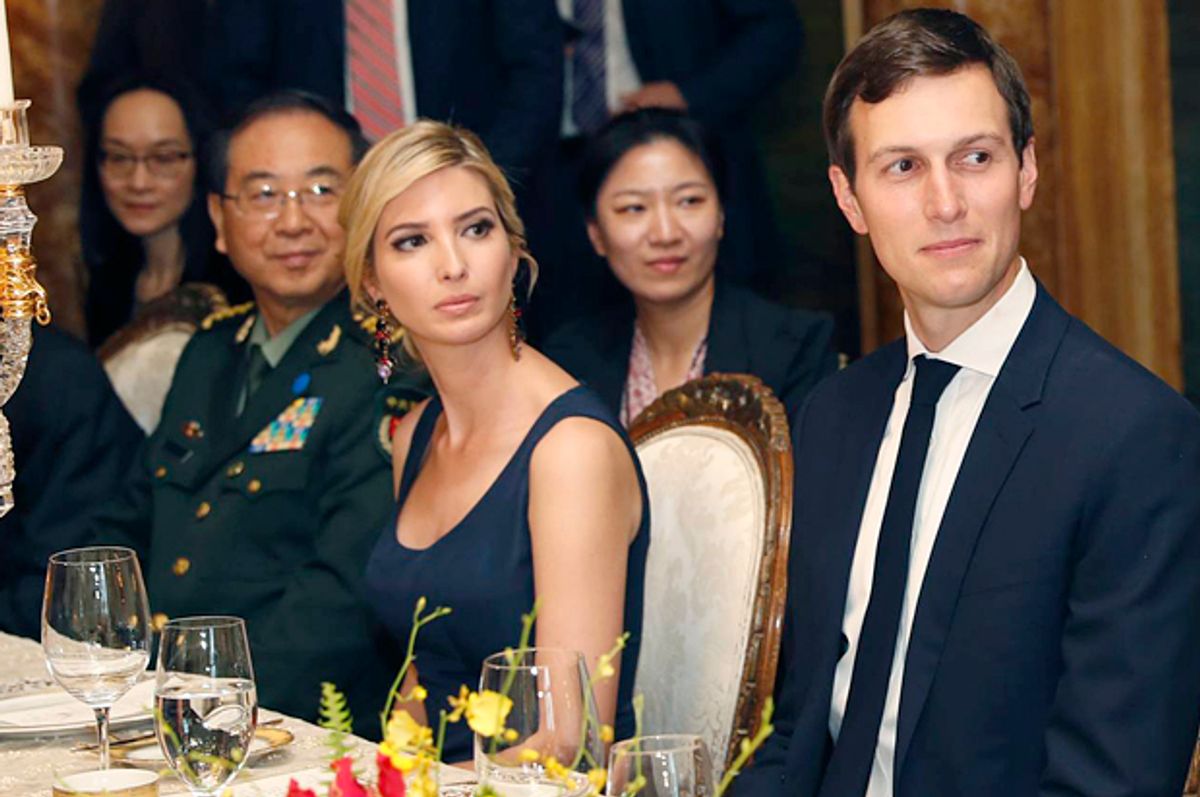 Donald Trump’s controversial relationship with the “alt-right” may be headed for an acrimonious split, as the president seems to be turning into what Breitbart trolls and InfoWarriors hate most in this world -- a globalist cuck.

It all began last Wednesday when the White House announced that chief strategist Stephen Bannon, an alt-right sympathizer who formerly ran the right-wing website Breitbart News, had been removed from the National Security Council just two months after his controversial appointment. Though the White House downplayed his removal, it was reported that Bannon had threatened to resign, and was convinced to stay by top political donor and Breitbart investor Rebekah Mercer, daughter of the hedge fund billionaire Robert Mercer. News of Bannon’s demotion came with various reports detailing the increasing friction between Bannon and the president’s senior advisor and son-in-law, Jared Kushner, who reportedly pushed for Bannon’s removal from the NSC. One report from the Daily Beast cited unnamed White House staffers who alleged that Bannon has taken to calling Kushner a “globalist” and “cuck” behind his back.

The alt-right’s bad week got even worse on Thursday when Trump ordered missile strikes on a Syrian air base in response to the use of chemical weapons (ostensibly by the Assad regime) earlier in the week. Alt-right nationalists promptly condemned Trump for doing what he had repeatedly said he wouldn’t. As the New York Times reported, prominent writers and bloggers on the far right attacked Trump and "criticized him for launching the strike without first seeking congressional approval — something he said on Twitter in 2013 would be a “big mistake.”

Topping off the week of globalist triumph, it was reported on Friday that Trump was considering removing Bannon from the White House altogether, which would clear the way for Kushner and his allies to reshape the administration’s agenda. The following day, however, a White House official told the press that Bannon and Kushner had agreed to “bury the hatchet” after an hour-long meeting.

Nevertheless, though Bannon may be sticking around for a bit longer, it seems increasingly likely that his days in the Trump administration are numbered. According to Mike Allen at Axios, both Kushner and Trump’s daughter Ivanka Trump are pushing for a “more open process driven by the interests of the president, not ideology,” and believe that Bannon is “too inclined to want to burn things down and blow things up.” If Bannon cannot adopt a more “cooperative approach,” reports Allen, he will be fired (“Either Steve becomes a team player and gets along with people, or he'll be gone,” said a top source).

Whether or not the chief strategist falls in line and becomes a “team player” (which seems unlikely knowing his bellicose nature), the implications are clear enough: President Bannon’s influence is waning, while the so-called globalists, to use the paranoid alt-right term, are consolidating their own power in the White House. Bannon has become an increasingly isolated figure after months of major policy setbacks and combative behavior, and his grip on the president has diminished.

When considering what this shift in power means in terms of the Trump agenda, it is important to recall that Trump does not have any real political convictions or concrete ideology — unless one considers his unwavering devotion to Donald Trump an ideology. Thus the president’s worldview and political agenda is driven largely by those who are advising him at any particular moment, and Bannon has basically served as his chief ideologist during his first three months in office. The former head of Breitbart has a worldview that is thoroughly reactionary and nationalistic — and borderline nihilistic if we are to believe writer Ronald Radish, who claims that Bannon told him he identifies as a “Leninist” because he wants to destroy the state and “bring everything crashing down.” It is not surprising, then, that his presence has resulted in a White House mired in chaos and controversy.

And so the New York globalists — like Jared and Ivanka, along with Goldman Sachs alumni like economic advisor Gary Cohn, Treasury Secretary Steven Mnuchin, and national security advisor Dina Powell — are hoping to promote a more corporate and establishment-friendly agenda. Of course, the alt-right won’t back down quietly, and “Trumpists” are already calling for Kushner head on a platter. The always entertaining Alex Jones branded Kushner and Ivanka “enemies of the republic” on Friday and allies of Bannon's derisively referred to the pair as the Democrats.

The shitshow has just begun, but in the end, whether the globalists or the nationalists come out on top, one thing will remain an immutable fact: Donald Trump is the president. And whether his advisors are reactionary ideologues or Wall Street elites or neoconservative chicken-hawks, Trump will always be Trump -- an ignorant, impulsive, and unprincipled demagogue. Though his policies may change, the chaos and corruption will continue as long as Trump remains at the helm.