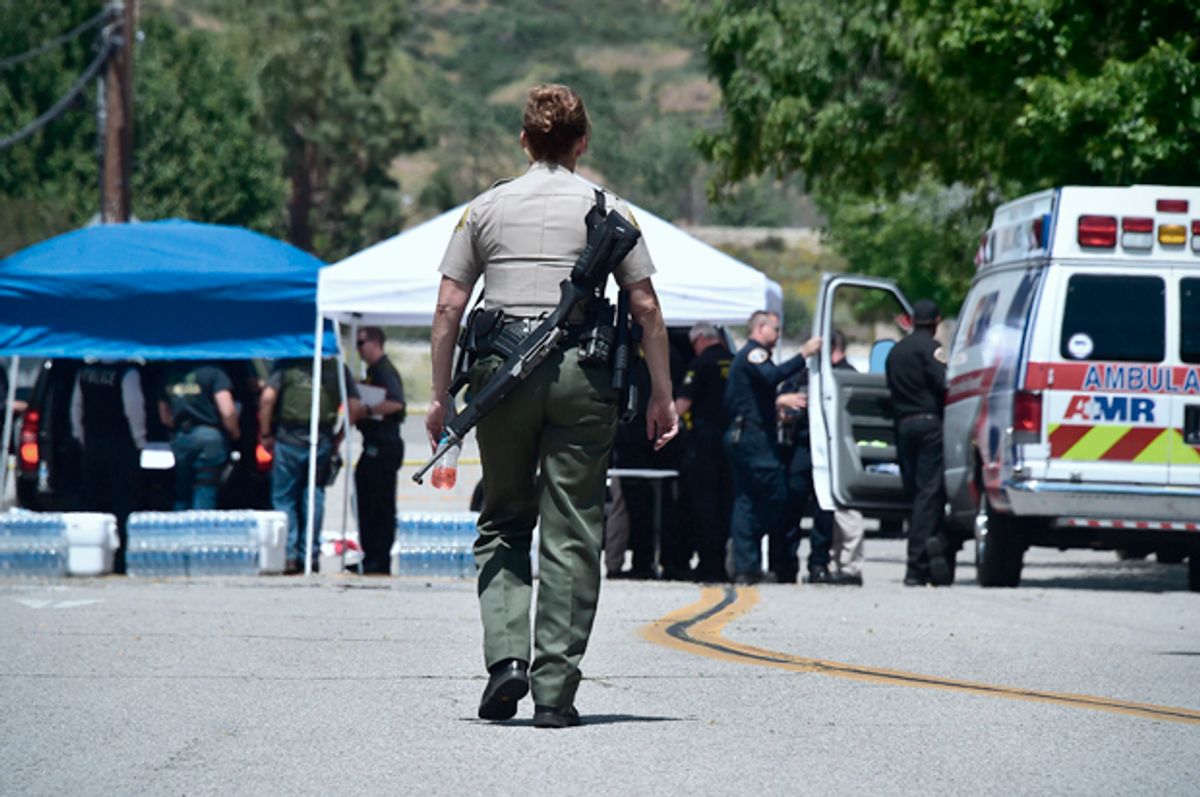 A teacher and an 8-year-old child were killed when a gunman entered North Park Elementary School in San Bernardino, CA and opened fire on Monday. Another young student was injured. It’s another in a long syllabus of public shootings and yet another occurring in a school, reviving memories of Columbine, Virginia Tech and Sandy Hook. Apparently, in plain view of a classroom of horrified kids, the assailant shot a teacher then turned his weapon on himself, committing suicide. As of this writing, a report from KNBC  indicates the gunman and the teacher were involved in a domestic dispute prior to the shooting.

Returning to Columbine and Sandy Hook, you might recall how defenders of gun rights, specifically the National Rifle Association and its bought and paid for bidders in the Republican congressional caucus, invariably pointed to mental illness as the sole inciting factor in those and other gun massacres. Any excuse to deflect from the reality that firearms, unlike cars or other favorite false equivalences of gun advocates, are designed for one purpose and one purpose alone: to inflict harm or death upon living organisms -- too often human beings.

Desperate to sidestep this reality, as well as the fact that firearms enjoy lopsided protections relative to all other for-profit retail products, the usual suspects have in recent history latched onto the mental health aspect of mass shootings. Naturally, mental illness is too often a catalyst for shootings like the one on Monday. (We don’t know if the shooter was mentally ill, but his suicide points us in that direction.) But, of course, it’s never the only factor. The easy availability of firearms and the inability of Congress to break through its ownership by the gun lobby are clearly two of the more dominant components. Residing at the top of the list, of course, is the gun culture in America that’s managed to somehow preserve a consumer product as a kind of “The Gods Must Be Crazy” sacrosanct object of worship -- a kind of pseudo-religious relic to be honored and protected rather than responsibly sold, used and regulated.

But let’s talk about the mental illness thing. After the Sandy Hook massacre, Wayne LaPierre, the enigmatic chief spokesman from the NRA, told supporters that a national database of mentally ill people might’ve prevented the shooting.

After the Sandy Hook massacre, Wayne LaPierre, the enigmatic chief spokesman from the NRA, told supporters that a national database of mentally ill people might’ve prevented the shooting at the elementary school. LaPierre declared, “How many more copycats are waiting in the wings for their moment of fame from a national media machine that rewards them with wall-to-wall attention and a sense of identity that they crave, while provoking others to try to make their mark.” He continued: “A dozen more killers, a hundred more? How can we possibly even guess how many, given our nation’s refusal to create an active national database of the mentally ill?”

In the days following the Navy Yard shooting less than a year later, LaPierre appeared on Meet the Press and screeched, “We have a mental health system in this country that has completely and totally collapsed. We have no national database of these lunatics.”

What LaPierre has repeatedly left unmentioned, however, is that the Gun Control Act of 1968 has long sought to prevent Americans with severe mental illnesses from legally purchasing firearms. Various state laws have attempted to backstop the law -- though it’s been more than challenging to maintain an accurate database, given how the reporting of victims suffering from mental illness is too often sketchy.

Enter Barack Obama. During the lame duck final days of his presidency, Obama authorized a new rule for augmenting the National Instant Criminal Background Check Improvement Amendments Act of 2007. The rule required the Social Security Administration to provide the names of citizens on disability for mental health issues and who aren’t personally managing their affairs, indicating a serious psychological incapacity. It’s not the answer to the crisis by any means, but it was intended to help gather a more comprehensive and enforceable National Instant Criminal Background Check database -- you know, like Wayne LaPierre repeatedly demanded. As the Associated Press reported:

The Obama rule would have prevented an estimated 75,000 people with mental disorders from being able to purchase a firearm. It was crafted as part of Obama's efforts to strengthen the federal background check system in the wake of the 2012 massacre of 20 young students and six staff at Sandy Hook Elementary School in Newtown, Connecticut.

It didn’t take long, however, for the Republican-led Congress to pass federal legislation overturning the Obama rule. Back in February, President Donald Trump signed into law a bill that overturned the Obama rule.

To repeat: the Obama rule was squarely in keeping with the NRA’s demand for a more robust and functional mental health database. Put another way: Wayne LaPierre wanted the Obama rule -- perhaps not by name, but in spirit. We’re to assume that allowing severely mentally ill people to potentially stockpile an armory of AR15s and the like will somehow make America great again.

Curiously, however, the NRA didn’t think a heartier mental health database was unconstitutional back in 2013, Mr. Grassley. Then again, fast forward to 2016 and, yes, of course, the NRA was opposed to the Obama rule. Why? The most likely explanation is that it was authorized by a black president with a funny name. In other words, it’s constitutional unless Obama and the Democrats support it. Once again, the NRA was Lucy holding the football and Obama was Charlie Brown.

It goes without saying that the NRA and the GOP will continue to move the goalposts on gun control. It used to be that reasonable regulations were permissible. Over the last three decades, however, the line in the sand has been incrementally compromised and moved back, loosening regulations and growing the $13.5 billion firearm industry, thanks in part to the NRA and its exploitation of the Second Amendment as a skeleton key clearing the way for more gun sales.

After the repeal of the Obama rule, and following Monday’s horrendous shooting in San Bernardino, what excuse will the NRA roll out, now that augmenting the database has been abandoned? Who the hell knows.