San Bernardino school shooting was an act of terrorism: Domestic violence is part of a larger political ideology

Terrorists kill in the name of ideology, and that's how the public needs to think of it when men kill women 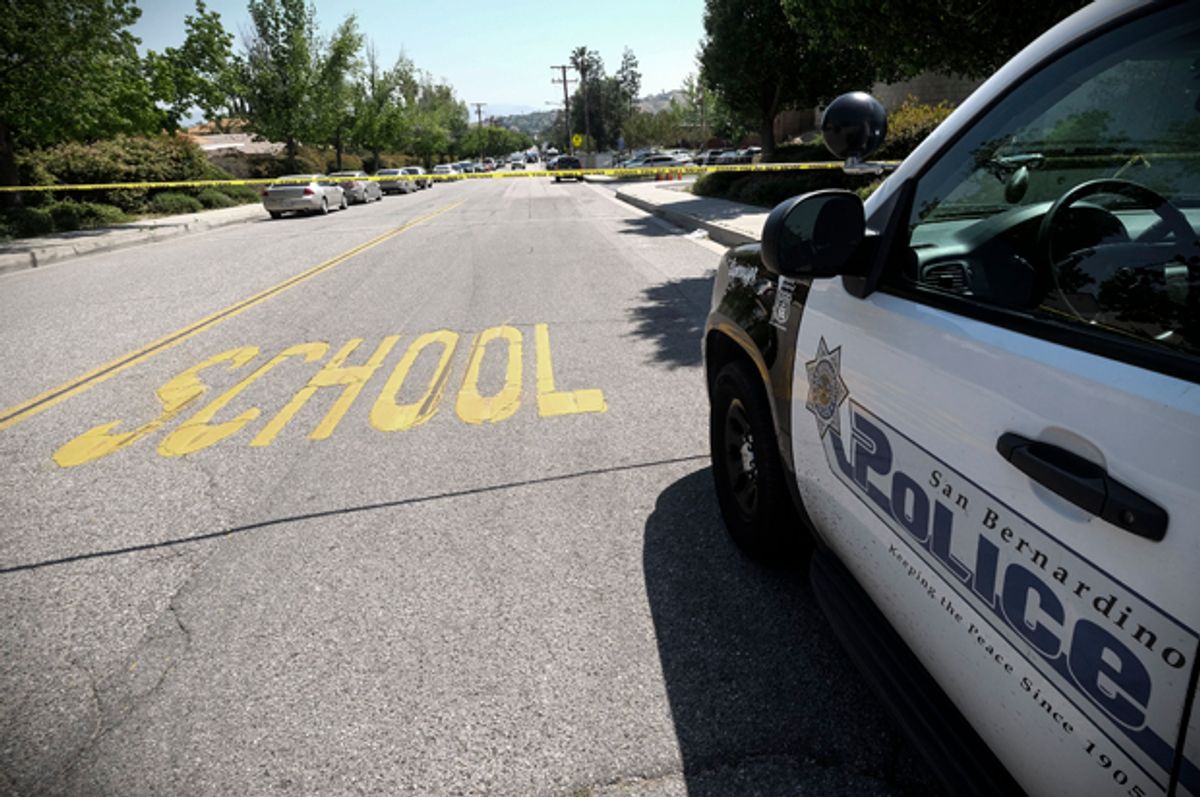 For a brief moment on Monday afternoon, cable news shifted its focus toward a school shooting in San Bernardino, California. The small city outside of Los Angeles had been the site of a terrorism-related shooting in December 2015 and there was clearly a concern that this shooting was somehow related. But soon it became apparent that the shooting was a domestic violence situation, almost certainly yet another case of a man who will kill a woman (and anyone around her) rather than let her leave a relationship. Then just as quickly as the cameras swooped in, the cable networks switched back to the 24/7 President Trump show.

Domestic violence-related murder isn't a sexy story, like terrorism. It's treated as mundane. It's seen as sad, but not of any national interest. It's an issue to be covered on women's websites, instead of front-page news (outside of a coincidentally geographical connection to a recent terrorist attack, of course).

But domestic violence is, in a sense, a form of terrorism. In most cases, it's a blunt assertion of male dominance over women and should be understood as a kind of political violence.

While estimates vary, experts agree that most murder-suicides are committed by men in acts of domestic violence. Long before the term "suicide bomber" was invented, there were men who were willing to die to assert what is essentially a political view about the male right to control female partners. Even after years of feminist advocacy highlighting the gendered nature of domestic violence, however, there's still a tendency to treat these kinds of crimes as a personal problem, not worth the wall-to-wall coverage that more overtly political terrorism gets.

Monday's shooting is a good example.

If someone had shot Karen Smith and two of her students in an elementary school in the name of ISIS, the story would dominate the next day's headlines, cable news would hardly cover anything else, and there would be endless, in-depth explanations about the political views that drive people to commit such violence.

But with this shooting, the coverage is more restrained and the motives of the shooter, Cedric Anderson, are framed in personal, not political, terms. "The violence has devastated Smith’s friends, family and colleagues," according to a piece in the Los Angeles Times. "It has also exposed a troubled relationship between Anderson and Smith — two people with very different pasts who had once seemed so in love."

The kind of depoliticization of domestic violence, however well-meaning, is a problem. It's a problem because it ends up implicating the victims of these crimes in their own abuse — as if they were just bad at being in relationships instead of victims of a sexist form of oppression. It's a problem, because it frames domestic violence as an unfortunate part of life, instead of the direct result of a widespread political ideology that holds that women are inferior to and exist to serve men.

The number of victims of this form of gender terrorism is staggering. While men and women both experience interpersonal violence, male-on-female violence is by far the worse problem. Half of all women, according to the Centers for Disease Control and Prevention, have been the victim of sexual violence other than rape. Women constitute 85 percent of domestic violence victims. The Violence Policy Center analyzed the number of murders of women committed by men in 2011 and found that a woman was 10 times as likely to be killed by a partner or ex-partner than by a stranger.

Our collective inability to see sexism — and sexism-based violence — as a political problem is bad at any time, but it's especially troubling now that Donald Trump is president. Racism was the primary engine driving Trump to power, but sexism was a close second.

A huge part of Trump's appeal to his voters was the promise, implicit in his over-the-top misogyny, that he would make America "great" again by re-establishing male dominance over women. The fact that he was caught bragging on tape about what sounds exactly like sexual assault — "grab them by the pussy" — didn't hurt Trump's standing with his supporters. The political ideology of male dominance, one that Trump clearly subscribes to, has always had the implicit threat of violence in it. Men's enjoyment of the feeling of power, even erotic power, that violence provides has long been treated like a joke. So it's no surprise that Trump's voters shrugged if off as "locker room talk."

Murder-suicides like Monday's crime are relatively rare, but most of them are committed by abusive men who make asserting dominance over a woman their final act in life. When a terrorist commits a similar act, we collectively wonder how an ideology could grip someone so deeply that he or she would do such a thing. We need to be asking the same questions about men who commit murder-suicide because they've become so deeply immersed in the ideology of male dominance.