"There can be no joy in such incompetence": Journalists call for Sean Spicer to be fired following "Holocaust center" comments

Dan Rather blasts Spicer's comparison to Hitler as "confused to be generous, and wildly chaotic to be more precise" 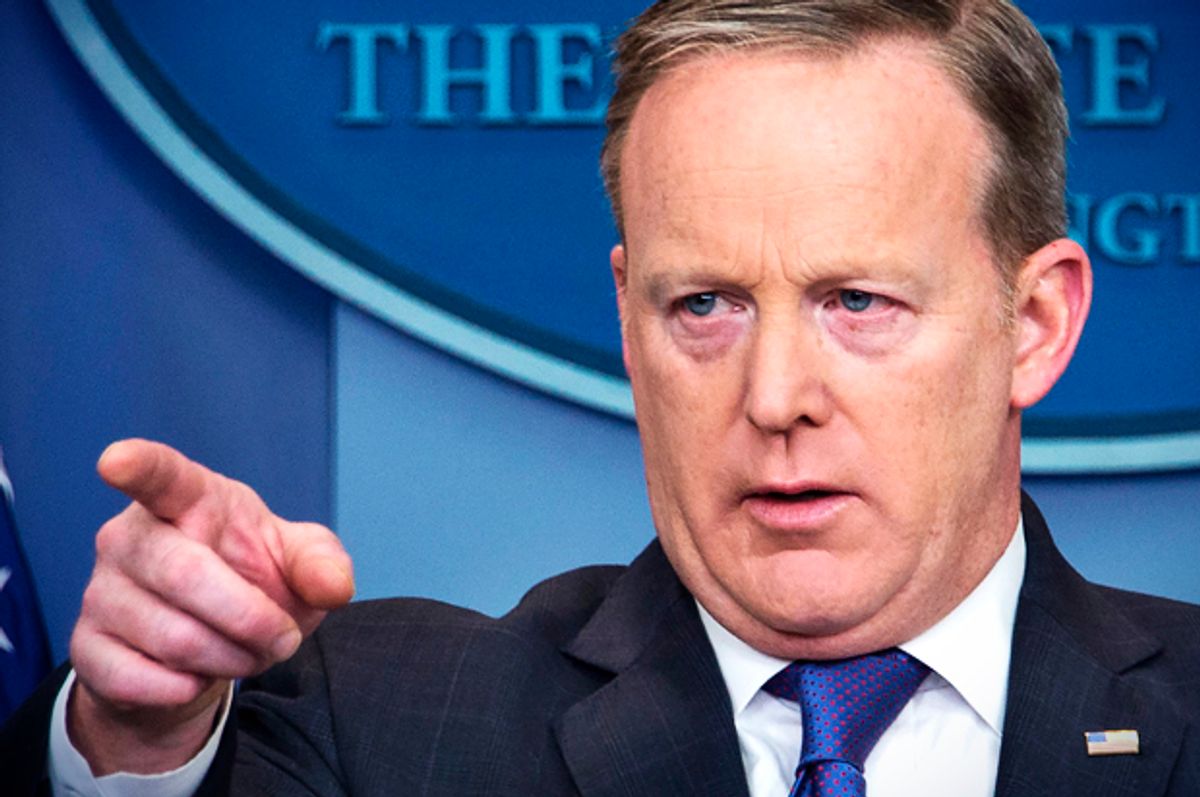 White House press secretary Sean Spicer has said his share of controversial statements. But none quite compare to Tuesday's, when he tried to make Hitler the lesser of two evils and reduced the horror of concentration camps to "Holocaust centers."

Fittingly, people responded with outrage and some journalists even called for his termination.

"I do not see how Sean Spicer can be allowed to continue in his current position," veteran journalist Dan Rather wrote shortly after Spicer's stumble. "There can be no joy in such incompetence," Rather said, blasting Spicer for "trying to make the case for the Administration's policy in Syria and vis a vis Russia which is confused to be generous, and wildly chaotic to be more precise."

Rather continued: "This line of rhetoric is so unhinged, so amateurish, so lacking in the context and perspective necessary for statesmanship and diplomacy that I do not see how Mr. Spicer can be allowed to continue in his current position."

Esquire's Charles Pierce published an article calling for Spicer's termination. Its opening read: "Fire the man. Or let him resign. I don't care. But do it now."

Shortly after Spicer's statement, the Anne Frank Center released its own statement, categorizing the top White House staffer as a Holocaust denier. "Trump must fire him at once!" Executive director Steven Goldstein said:

On Passover no less, Sean Spicer has engaged in Holocaust denial, the most offensive form of fake news imaginable, by denying Hitler gassed millions of Jews to death. Spicer's statement is the most evil slur upon a group of people we have ever heard from a White House press secretary.

While conservative commentator Jon Podhoretz wasn't willing to go quite as far as the Anne Frank Center, he did call Spicer a "blathering idiot":

Spicer has even lost Alex Jones. InfoWar's Paul Joseph Watson had to alert Jones of Spicer's comments on Tuesday, to which Jones expressed sheer disbelief.

"What the hell is that from Sean Spicer?" he questioned. Was he being sarcastic?" He added, "It shows how historically ignorant his crew is."

WATCH: Alex Jones re Spicer "What the hell is that from Sean Spicer? Was he being sarcastic? It shows how historically ignorant his crew is" pic.twitter.com/z7qW1paIel

Things have gotten so bad for Spicer that Democrats smell blood in the water.

Democratic leader Nancy Pelosi, Calif., drafted a statement to demand Spicer be fired. "The President must immediately disavow his spokesman's statements," the House Minority Leader wrote. "Either he is speaking for the President, or the President should have known better than to hire him."

Celebrities even got in on the pile-on.

Singer Barbara Streisand and actress Debra Messing encouraged the use of the hashtag #FireSpicer on Tuesday:

One particular tweet has been making the rounds by Jared Kander, president of the voting rights organization Let America Vote.