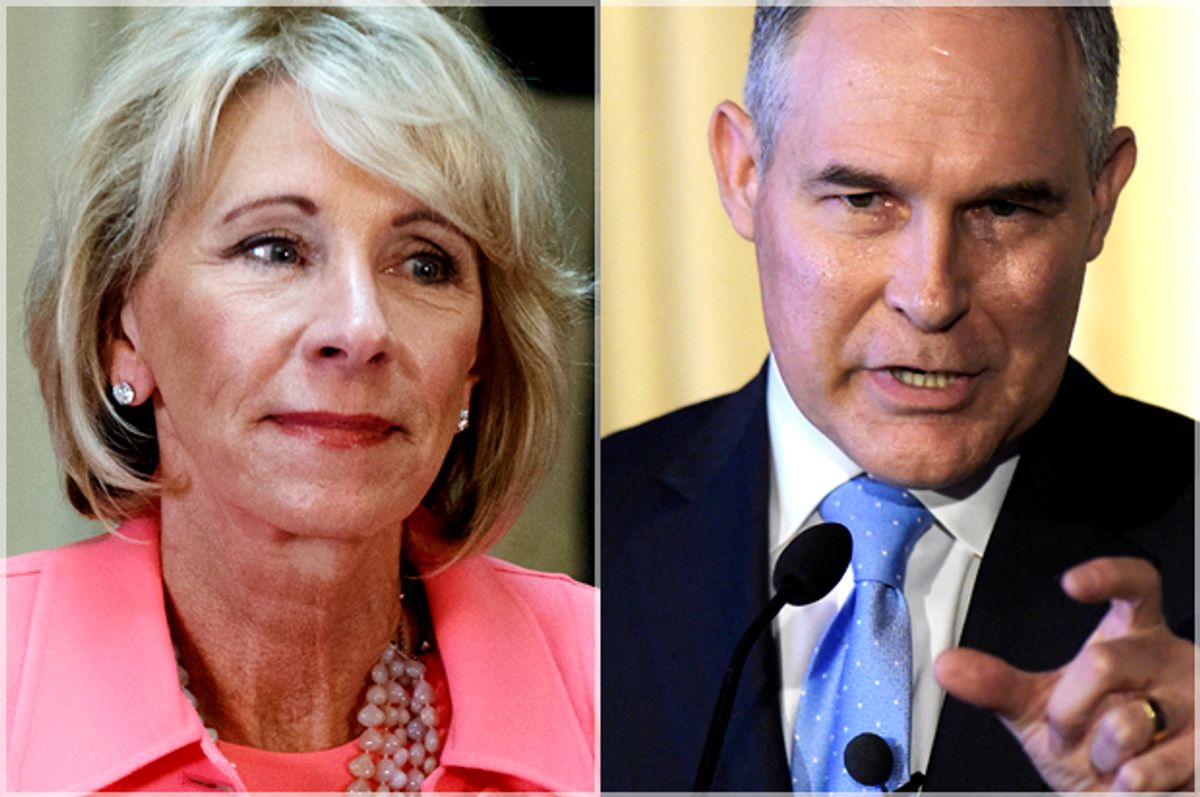 Two of President Donald Trump’s most controversial Cabinet secretaries are demanding that taxpayers spend more money to beef up their own private protection while simultaneously attempting to slash the budgets of their own agencies.

Education secretary Betsy DeVos and EPA head Scott Pruitt want to cut spending drastically their respective government agencies, but reportedly demand an increase in federal funding to protect them from people upset about their decisions.

The Washington Post reported last week that the Education Department is currently paying the U.S. Marshals Service nearly $1 million a month to protect DeVos — a significant step-up in security services for a Cabinet post that had previously relied on a small team of in-house civil servants.

Federal marshals are protecting DeVos at a cost to her agency of nearly $8 million over eight months, according to the U.S. Marshals Service. Under an agreement signed last week, marshals will continue providing security for DeVos for the next four years, or until either agency decides to terminate the agreement.

The Education Department has agreed to reimburse the marshals $7.78 million for their services from mid-February to the end of September, said a marshals spokeswoman.

The Post also reported that “while the department is spending the additional money on DeVos’s security, members of the in-house security team that guarded previous secretaries remain on the payroll.”

The past four Education secretaries have been protected by six agents from the Education Department’s own security unit, according to a former department official who spoke to Politico. DeVos, however, was briefly blocked by protesters from entering a Washington middle school following her contentious confirmation hearing and has since sought increased security.

Trump, meanwhile, wants to cut the annual budget of DeVos' department by almost $9 billion. His so-called skinny budget curtails or eliminates funding for around 20 departmental programs, and would remove $2.4 billion in grants for teacher training and $1.2 billion in funding for summer and after-school programs.

Trump’s EPA chief also wants additional security guards, allegedly to protect him "from his own employee” and “'the left.'"

EPA administrator Scott Pruitt has requested around-the-clock personal protection, which would be a first for an EPA chief and could require hiring 10 additional full-time employees. From The New York Times:

"One enforcement activity that could be set for an increase: security for Scott Pruitt, the new E.P.A. administrator. The agency has asked for 10 additional full-time staff members for a round-the-clock security detail — a first for an E.P.A. chief, who usually has only door-to-door protection — and more than doubling the agency’s infrastructure and operations staff."

Again, as the Times noted, Pruitt’s request for 10 additional agents would more than double the agency’s current security staff. Such protection would mark a dramatic increase from security given to past administrators and could diminish resources available for EPA's criminal enforcement, according to former agency officials who spoke to E.E. News.

Former EPA head Gina McCarthy’s security detail consisted of six to eight personnel who assisted only during international travel and public appearances. Agents routinely picked McCarthy up from the airport and traveled with her on site visits, Quartz noted.

In a Feb. 16 email,  EPA’s criminal enforcement office chief emailed staff shortly before Pruitt’s confirmation to warn them of the change: “Based on conversations with the transition team, we anticipate that Mr. Pruitt will initially request a 24/7 detail.”

The EPA currently does not have enough agents to provide a 24/7 detail. As E&E News noted, the EPA is required by law to have 200 federal law enforcement agents to investigate and enforce environmental crimes. But the agency only had about 177 agents in late 2013 amid budget cuts and EPA staff reductions.

Last month, Trump released a draft federal spending budget requesting $2.3 billion in additional cuts to the EPA. Under Trump’s budget, climate change research would be obliterated, funding for the cleanup of hazardous sites would be slashed by 45 percent and a projected 3,200 jobs would be eliminated.

Myron Ebell, who led Trump’s EPA transition team, told E&E News in February that the additional security agents could help protect Pruitt from protesters and his department’s own employees.

“I think it’s prudent given the continuing activities by the left to foment hatred and the reported hostility within the agency from some unprofessional activists,” Ebell said.