The lesson of Starz's "The White Princess": Not all family affairs are worth watching 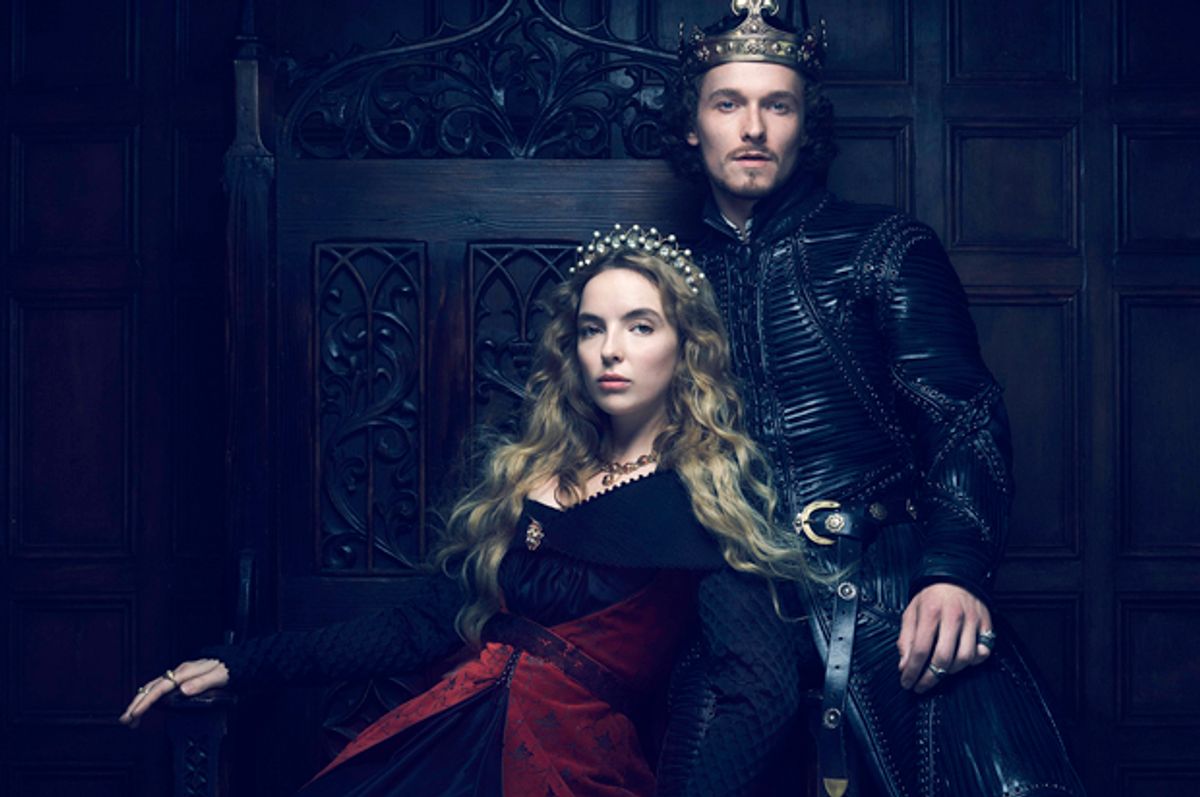 Note to any high school students watching “The White Queen” while cramming for that world history final: Handrails and zippers did not exist in Lancastrian Britain. Also, turn off your TV dammit! For the history imparted in that miniseries and “The White Princess,” premiering Sunday at 8 p.m. on Starz is, ahem, bursting with speculation.

Viewers should expect nothing less. For in the annals of history, King Henry VII (played in the miniseries by Jacob Collins-Levy) and Elizabeth of York (Jodie Comer) were, in modern parlance, pretty basic. Their marriage was a political palliative to a land shredded by decades of conflict, forged after Henry ended the Wars of the Roses by defeating Richard III at the Battle of Bosworth.

The reign of Henry the VII and his Lizzie preceded the decidedly sexier times of Henry VIII, the British king Americans associate with gnawing on gigantic turkey legs (which is false, but hilarious) and plowing through multiple marriages (decidedly true).

In contrast, various accounts posit that the union of Henry VII and Lizzie may have begun in a rocky place but eventually became an affectionate one. And while that version of events is sufficient to gas up the tank for a two-hour movie, it’s probably not enough to keep viewers interested for eight full hours.

Bring on the Mommies Dearest.

Historical accuracy is often sacrificed on the altar of costume drama, especially if the period in question involves the British monarchy of old.  The further back we go in time, the murkier the accounts become. This is where theory and scoffing and nitpicking comes into play, presuming to stain any esteem the account in question may attract.

Such dismissive attitudes met “The White Queen” when it premiered in the U.K. and on Starz in 2013, and rightly so. Any miniseries that attempts to jam more than three decades of history and three novels’ worth of material into 10 hours is galloping on thin ice to begin with, and that’s before the viewer marinated in visions of renaissance faire dresses and various failures to mask modern upgrades to the castles used in the production.

What historians and monarchy buffs failed to take into account is how much audiences love opulent palace intrigue and high-born bitchery. “The White Princess” drips with these temptations, although the venom is less intoxicating that the stuff of FX’s “Feud.” The monarchic conflict is stately and stilted, and much to the viewer’s royal pain, originates not from the queen but her mother and mother-in-law.

Elizabeth of York is still her mother’s daughter — and if “The White Queen” proved anything, it is that Elizabeth Woodville, aka The White Queen (played here by Essie Davis) is a political strategist who could give Cersei Lannister a run for her gold. Now that she’s a Dowager Queen whose house has fallen, she has far less power than her rival, the king’s mother Lady Margaret Beaufort (Michelle Fairley).

Lady Beaufort doesn’t like young Lizzie or her mother. The Dowager Queen can’t stand Lady Beaufort and wants to tear down her son. The people of England have no idea what to make of any of this, since the Tudors are at this point a jumped-up house. Oh, did we mention that Elizabeth’s sister Cecily (Suki Waterhouse) is a bratty, jealous minx?

This all sounds more exciting than it actually turns out to be. Look elsewhere for battlefield action; what’s shown in “The White Princess” is brief and takes a backseat to verbal volleys flung back and forth in castle halls. As for romance, that comes later. As the series kicks off, if the inter-familial hatred isn’t enough of a libido killer, Lady Beaufort’s habit of storming into the king and queen’s bedroom certainly does the trick. The White Queen may have founded her reign on her sex appeal, but the court of “The White Princess” is decidedly chillier.

The same era also inspired George R. R. Martin’s “A Song of Ice and Fire” novels, but among the many differences between the two is that neither “The White Queen” nor “The White Princess” have any dragons.

Even so, Gregory has never made any pretense regarding the creative license she takes in fictionalizing these various histories. Hence, she expands on a rumor associated with Elizabeth of York’s grandmother Jacquetta, to add a touch of sorcery to “The White Princess.”

To add romantic tragedy to the marital tension between Henry and Elizabeth, Gregory builds upon the proposal that Lizzie was secretly in love with Richard III. Her uncle. A man who locked her brothers in the Tower of London and made sure they were never seen again. Yes, that hunk. Gregory chose one tangle of a family tree to play with.

Despite the mixed reviews that shrouded “The White Queen,” the series performed quite well with audiences in the U.K. and on Starz, where it attracted an average of 4.8 million viewers per episode across all its viewing platforms.  The cable channel likely expects “The White Princess” to perform just as well in the coming weeks and has been promoting the crumpets out of it since it was announced a year ago.

Gregory and showrunner Emma Frost found success in depicting these noblewomen as the secret power brokers behind the Plantagenets and Tudors, expanding their roles and influence beyond that of political tools or premium baby machines.  That’s worth noting, especially given the promotion of “The White Princess” as a feminist tale. But this narrative is only somewhat accurate. It’s true that we don’t often see stories of this epoch from a female perspective, unless it’s woman sitting on the monarch’s throne.

But in “The White Queen,” what power the ladies and queens wield is still very much subject to the caprices of the men surrounding them. In “The White Princess,” Lizzie has even less agency than her mother did, at first.  As the princess embraces the suffering common folk as a political ploy and grows to trust her Henry, she is able to increase his popularity and bend his will to meet her desires. In other words, she’s the Ivanka Trump of 1485.

Many of the critiques lobbed at “The White Queen” in 2013 also apply to “The White Princess,” although the costumes and set design of the latter are an improvement over its predecessor. But the dialogue remains nearly as constrained and unexciting, even though once again an accomplished cast makes heroic efforts to breathe fire into their lines.

Comer and Collins-Levy’s handsome faces sell “The White Princess,” and Vincent Regan is a solid presence as Jasper Tudor, but given that the energizing conflict is primarily in the hands of Davis, Fairley and Joanne Whalley, who plays the Duchess of Burgundy, their electric performances carry the show.

What is there to learn, after all, from “The White Princess”? Maybe nothing. It’s probably enough for the audience to enjoy another harmless chapter of one of history’s best-known soap operas. But those looking for fire and blood, may want to venture elsewhere. If you’re seeking an education, for heaven’s sake, crack open a textbook — not a novel.