Why is Donald Trump flip-flopping on one of his biggest campaign promises and caving to China? 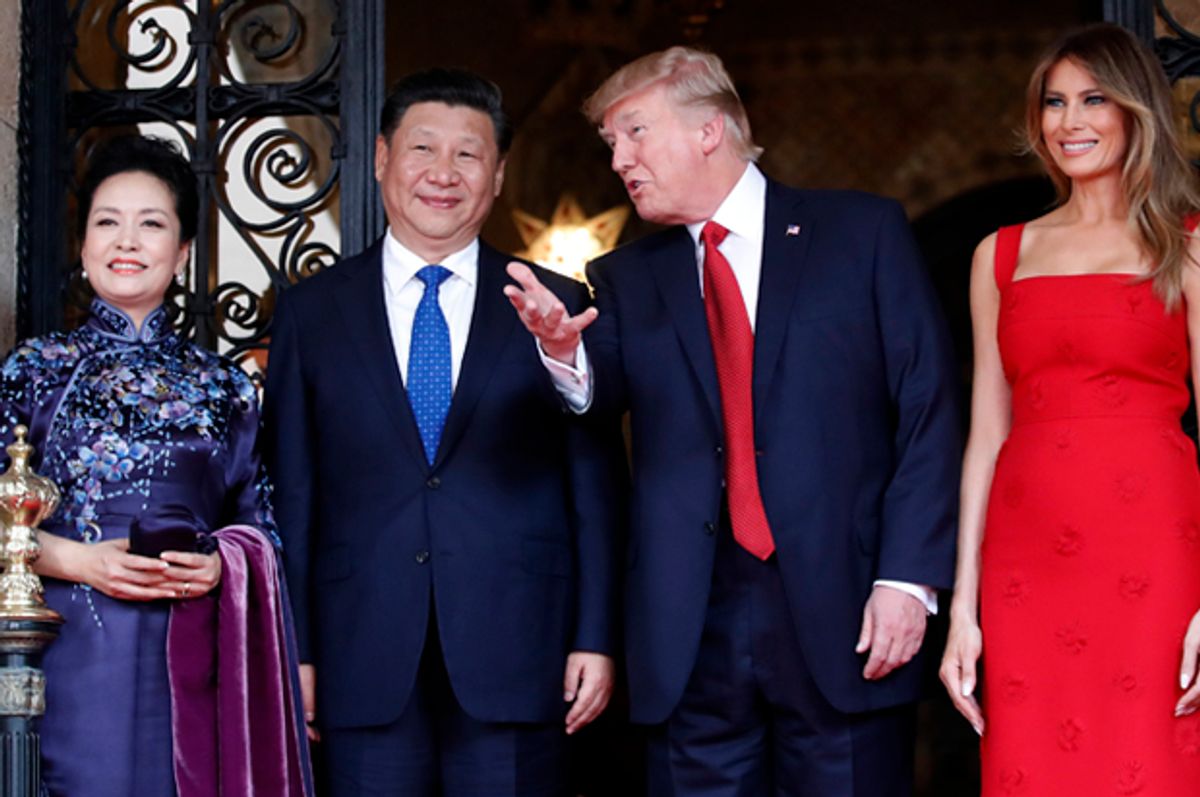 Essentially nothing has gone as planned for the new administration, which was made more apparent this week when President Donald Trump said he would not label China a currency manipulator. It seems that after a friendly visit with China President Xi Jinping, Trump has decided to abandon his campaign promise to confront China's rising dominance.

The effortless flip-flop suggests that the White House's foreign policy will deviate from what voters heard on the campaign trail. But why is Trump so willing to reverse course with China? Here are three theories:

1. Xi Jinping was nice to him.

As Trump settles into the presidency, it appears as if he is willing to flip-flop on campaign promises if it will appease world leaders he has a rapport with. After Xi's visit, Trump said he had "great chemistry" with the Chinese leader and spoke fondly of a chocolate cake they shared. The president also said his earlier criticism directed at China for its inaction in North Korea was wrong after he heard a history lesson on the subject from Xi.

Trump often gives concessions to leaders who are friendly with him. Trump even spoke warmly of former President Barack Obama immediately — for a while at least — after the presidential election when the two met cordially at the White House.

If Xi does not get on Trump's bad side, China can maybe expect a more favorable outcome from the U.S. president.

“He will be the best U.S. president for China compared with any previous U.S. president,” Shen Dingli, an international relations expert from Shanghai’s Fudan University, told the Guardian. “He is the most friendly U.S. president ever.”

2. Donald Trump is secretly a globalist and Gary Cohn is pulling the strings.

In recent weeks the president's national economics adviser, Gary Cohn, has slowly won Trump's ear. A former president of Goldman Sachs and a registered Democrat, Cohn has an ideology that completely counters that of Steve Bannon, the president's campaign architect who has pushed for an anti-China, anti-globalist agenda.

Supporters of Bannon's anti-globalist movement fear that Cohn has jockeyed for more power in the Oval Office and may be calling the shots on trade and U.S.-China relations. Cohn's rising influence has earned him the nickname "Globalist Gary" in the more bitter corners of the White House, Lifezette reported.

Trump's flip on China may be proof that Cohn carried out a successful coup on Pennsylvania Avenue.

3. Ivanka Trump will have to pay more to import her clothing line.

Despite Trump's calls for American products to be made in America, his daughter Ivanka's brand continues to have Chinese-made dresses shipped to the U.S. Since Election Day, the first daughter's line has imported 56 shipments from China and Singapore, CNBC reported.

Although Ivanka has tried to distance herself from her brand since she took a job as the president's special assistant, she still receives payments from it through a trust.

Reports in February suggested that Ivanka's brand was failing after consumers were supposedly turned off by her silence about her father's policies. But a new filing from G-III Apparel Group, the  company that makes Ivanka's clothing line, shows that G-III made a profit last year and is thriving.