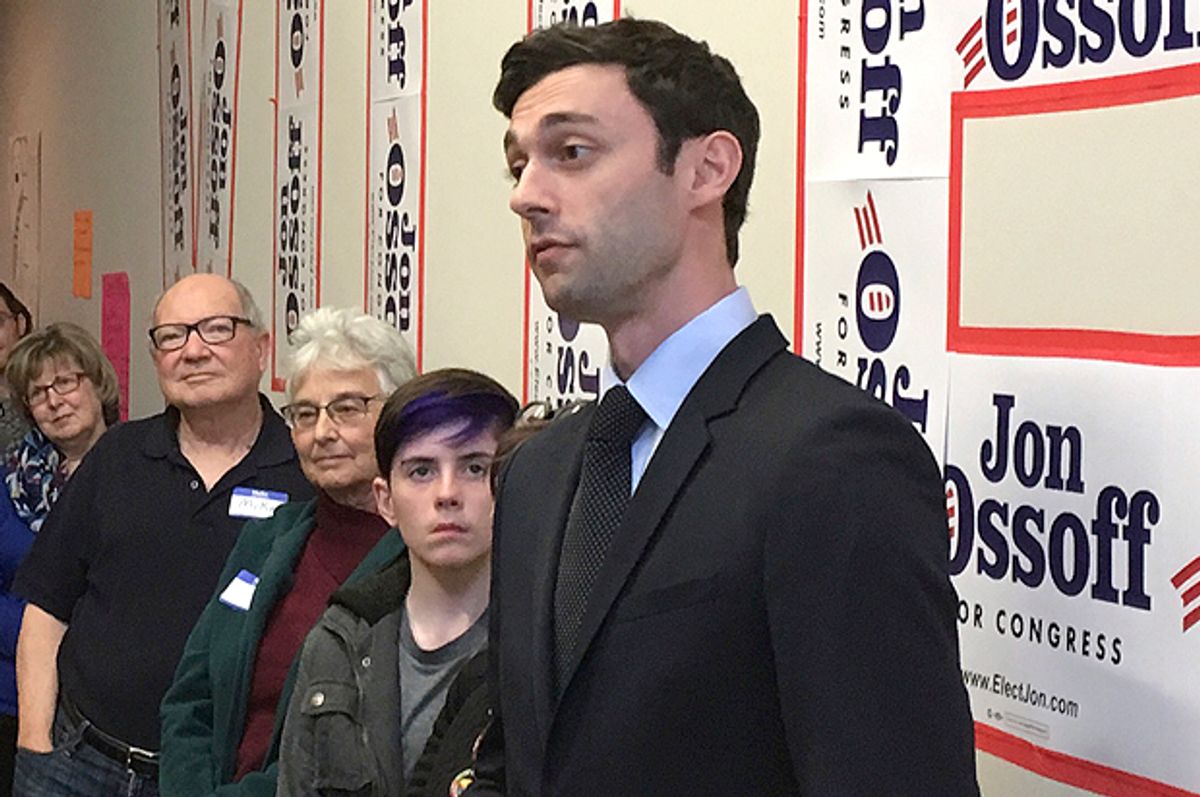 TUCKER, Ga. — To the 50 or so people who filled up the back room of Piccadilly Cafeteria in this Atlanta suburb on Wednesday night, Democratic congressional candidate Jon Ossoff is a godsend. The 30-year-old Ossoff is threatening to snatch away the reliably Republican congressional seat recently vacated by Health and Human Services Secretary Tom Price. This special election in Georgia’s sixth district has become a fully nationalized referendum on the Trump presidency, with outside spending groups and national party committees dumping money and resources into the contest. The people who came to Piccadilly to meet and greet Ossoff felt an urgency that borders on desperation to send him to Congress.

Ossoff is the consensus Democratic candidate running against a splintered field of Republican challengers, and he’s polling in the mid-40 percent range heading into the April 18 election. If he clears 50 percent of the vote, he’ll win outright and avoid a runoff election in June. “The intensity and the momentum here is driven by the grassroots at the local level,” Ossoff said in an interview at the Piccadilly. A win on April 18, he said, “would be a demonstration of the potential of grassroots organizing, a renewed emphasis on field [organizing] and grassroots fundraising.”

You can hardly stumble three steps in the 6th Congressional District without hearing the word “grassroots,” and the Piccadilly meet and greet was as grassroots as it gets. The event was co-sponsored by Indivisible Marching Buddies and Indivisible Progressive Action Group for Atlanta, two of the many Indivisible-linked activist groups that have sprouted like mushrooms since President Donald Trump’s election. Everyone there filled out postcards to mail to voters reminding them to get out and cast a ballot.

Margie Lee-Syzmanski, a 64-year-old retired social worker from Chamblee and founder of Indivisible Marching Buddies, attended the Women’s March on Washington in January and returned to Georgia imbued with a feeling of activist vigor. “I have not been an activist since the Vietnam War,” Lee-Syzmanski told me, adding that she felt Trump's election was "more than I could accept without standing up and saying something.”

Indivisible Progressive Action Group for Atlanta was started by Annabeth Balance, an 80-year-old retired transit worker who owns a Native American jewelry store and has a degree in physics. (She didn’t pursue a career in that field because, she said, “all the jobs involved killing people.”) Balance started organizing on behalf of Ossoff after civil rights icon Rep. John Lewis, D-Ga., endorsed him. “When he came up and said, ‘Here’s this young guy, Jon Ossoff, that I’m supporting,’ that was it for me,” she told Salon.

This local activism for Ossoff has been complemented by endorsements from online behemoths like Daily Kos, which was quick to recognize this district north of Atlanta as a potential pickup for Democrats and threw its support behind Ossoff. The resulting flood of donations help Ossoff raise a record-setting $8.3 million. David Nir, Daily Kos’ political director, told Salon in an email that endorsements from Lewis and Rep. Hank Johnson, both Atlanta area Democrats, showed that “Ossoff had quickly consolidated considerable local support to a degree no other candidate had, so we jumped in. And from there, it all exploded.”s

To see this level of grassroots enthusiasm is interesting because the assumption in Democratic politics is that the activist energy emanates primarily from the Bernie Sanders wing of the party, which powered Democratic candidate James Thompson to a near upset earlier this week in Kansas’ fourth district (formerly represented by Mike Pompeo, now Trump's CIA director). Ossoff is in no way a Berniecrat; he preaches positivity and pragmatism at the expense of ideology, and his campaign style is so highly polished that you’d be scared to run on it wearing socks.

I asked Ossoff if he would support a Medicare-for-all proposal of the sort that Sanders backs. He would not. “I think we should be focused on incremental progress based upon the body of law on the books rather than going back to square one and proceeding from a starting point of ideological purity,” he said. “I think there needs to be less ideology around health care policy on the left and the right.” (Ossoff demurred on whether he’d back a Medicare buy-in option for Obamacare exchanges.)

For Democrats in Georgia’s 6th Congressional District, this is fine. “I don’t think he’s a radical progressive,” Lee-Syzmanski said. “He’s not demanding free health care for everyone and la la la.” Cynthia Canida, a physician’s assistant from Atlanta, told me that she backed Ossoff because of “his commitment to bring a progressive idea and to implement it in a way that reaches across the aisle.” Complaints about hyperpartisanship were on the lips of just about everyone I talked to.

And, of course, there’s the Trump factor. The president is not a popular person in this longtime Republican stronghold — he won the district by just 1.5 points last year. Backlash directed at Trump’s presidency is driving a good deal of the activism on which Ossoff is capitalizing. Mark Shepherd, a retired home inspector from Atlanta, shared with me that he’s supporting Ossoff to protect the marriage rights he and his husband now enjoy. “I’m 65; it’s time that me and my spouse, that we can kind of sit back and enjoy,” he said. “But I can’t. Not with Trump.”