Beck and his partner, David Barton, are holding training camps to teach fake history to a generation of students 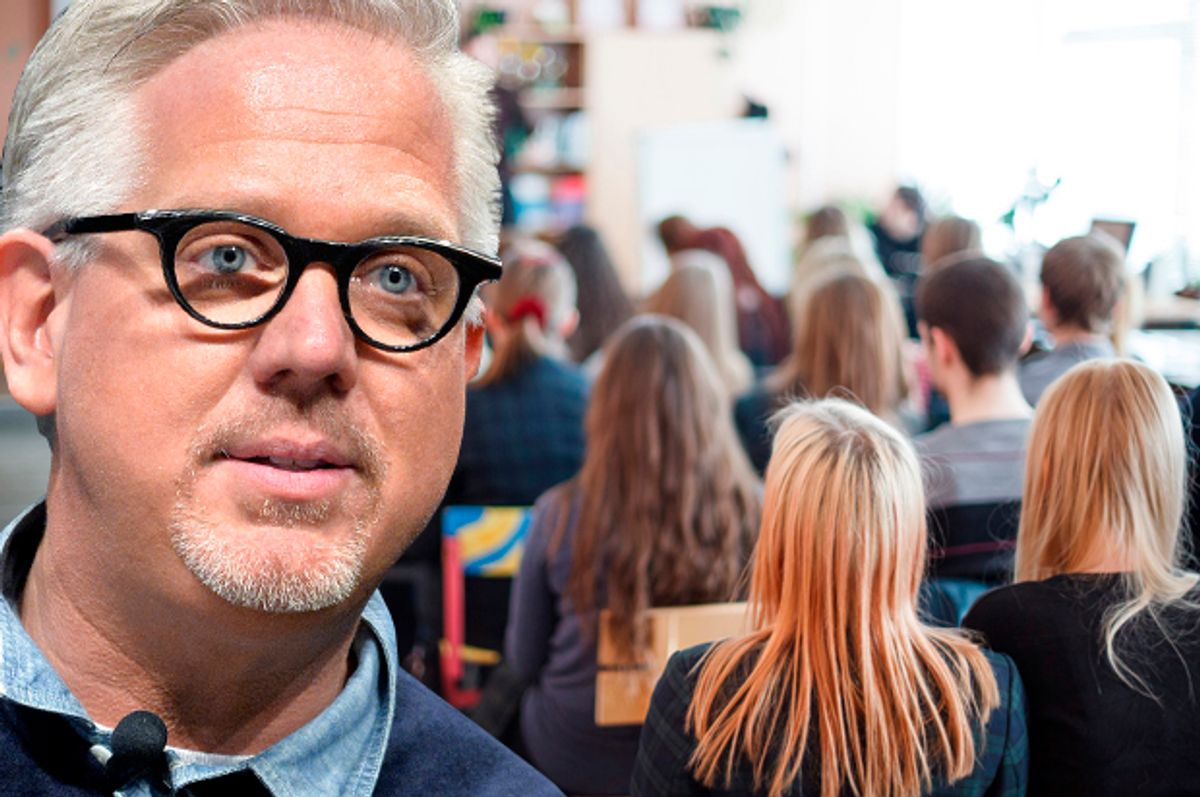 If there are two characteristics that really define Trumpism, they are a total disregard for the importance of facts and a nostalgia for a mythical, vaguely defined time of American "greatness." That makes the Trump era ripe for Glenn Beck's ongoing project of creating and promoting his revisionist view of American history — one that valorizes straight white men as humanity's natural leaders and grants Christian fundamentalism a centrality to American history that it does not, in reality, have.

Beck has been ramping up a program he runs with the pseudo-historian David Barton to peddle Barton's fake history version of American history.

In Barton's history, the Founding Fathers' idea of government was rooted in fundamentalist Christianity, instead of Enlightenment philosophy, and the contributions of people of color are minimized in service of centering Christian white men as the righteous shepherds guiding everyone else. As Kyle Mantyla at Right Wing Watch reported, the latest move by Barton and Beck is a two-week program, for $375 a head, that will teach their fake version of history to high school graduates before they head off to college so "they can then set their ignorant professors straight on the 'real' history of America."

Beck isn't subtle about his intention to give college professors headaches by filling their classrooms with fledging right-wing nuts spewing "alternative facts" about history. “Your kids will be challenged to go and find the documents to make the cases that they’re most likely going to have to make in college with their professors,” Beck said in his announcement. "I guarantee you the professors at college will have the wrong answer."

The "wrong" answers, in this case, being the actual facts of history.

Barton, whose historical views are the ones Beck is pushing here, is pretty shameless about making stuff up if it suits his view that our country was meant to be a Christian theocracy and not a secular democracy. "For example, in his version of history, the founding fathers 'already had the entire debate on creation and evolution,' and chose creationism," explained the Southern Poverty Law Center profile of Barton. "Reality check: Charles Darwin didn’t publish his theory of evolution in "The Origin of Species" until 1859, more than half a century after the founding fathers were active."

This two-week program is part of a larger effort that Beck and Barton first proposed in 2012 for building a museum to market this fake version of history. That hasn't quite happened, but they've cobbled together a pseudo-exhibit and a curriculum and are using those trappings to try to sneak Barton's misinformation into high school and college courses.

If this sounds like the methods that Christian conservatives have been using to undermine the teaching of biology and to slip their views about creationism into classrooms, then congratulations on paying attention.

As Zack Kopplin — who currently works as an investigator for the Government Accountability Project but who made his name exposing the sleazy tactics used by creationists to sneak their religious beliefs into public high schools — argued in a phone conversation, Barton's reactionary historical revisionism and creationism share a common root. Reactionaries like Beck and Barton "view this as a continuing existential crisis, that they are under threat from the secular, real history people that don’t want to teach that the Earth is 6,000 years old or that Moses created the Constitution," Kopplin explained.

Some conservatives need to put "straight white men" at the "top of [the food chain], top of history," Kopplin argued. Evolutionary theory and fact-based history threaten the “hierarchical structure where they’re at the top."

Evolution does this by threatening the view that God created man in his image, to rule over the Earth (and over women). History threatens this view by suggesting that white men's dominance is not the result of their natural superiority and inherent genius, but because systems of oppression that suppressed or erased the contributions of women and people of color.

Barton's need to believe in this world where God created white men to be benevolent dictators can lead to some stunning moments of unvarnished racism. In 2011 on the Christian TV show "Celebration," Barton argued, "That’s why we said we want to separate from Britain, so we can end slavery."

This comment is so flatly false that it hardly needs debunking. It is, however, revealing of the white supremacist view propelling Barton. Rather than admit that chattel slavery is an evil that white people created and perpetuated, Barton treats it as if it had been just some unsourced evil, and that white men were actually the great heroes who put an end to it.

Barton's all-consuming need to believe only white men are really capable of greatness has led him to make similar arguments about the civil rights movement. In 2010, he took part in an effort to rewrite Texas history book standards to erase the contributions of Thurgood Marshall, César Chávez and even Martin Luther King Jr.

"Only majorities can expand political rights in America’s constitutional society," Barton argued to reporters at the time.

In 2012 Barton's tendency to talk utter nonsense finally caught up with him after the publication of his book, "The Jefferson Lies: Exposing the Myths You've Always Believed About Thomas Jefferson," a work that should have just been called "The Jefferson Lies," because lies, mostly to minimize Jefferson's history of slaveholding, are what it was full of. A handful of conservative outlets finally turned on him and his publisher eventually recalled the book.

But none of this has stopped Beck from bolstering Barton's career and trying to bamboozle as many people as possible into believing this alternative form of history. If anything, Beck has been Barton's saving grace, as the efforts to start the museum and indoctrinate young people began right around the time Barton's Jefferson book was being recalled.

Training young people to challenge historical facts in the classroom isn't quite as dangerous as earlier Barton efforts to insert false information into the curriculum, but there's still reason to be worried. “When you have people challenging teachers, it’s a chilling factor," Kopplin argued. This is especially so at a high school level, where teachers can find that teaching students about evolution or that slavery was the reason for the Civil War — facts that many right-wingers deny — will result in irate phone calls from parents that can lead a teacher to just give up.

College professors have more leverage, Kopplin pointed out, because they tend to have a more pedigreed authority and can tell students just to drop the class if they don't like the facts. Still, Kopplin agreed that having young people spewing "alternative facts" in a college classroom setting could work to confuse other students and make it harder for them to figure out which facts were true and which were  nonsense.

Kopplin was more worried, however, that Beck and Barton's trainings were about creating an army of young people who, confident in their own lies, would run for office and engage in political activism in an effort to further spread their falsehoods.

In our age of Trump, when even the president talks shit without any shame, the right-wing alternative history movement is likely to be emboldened. Many of our political leaders have utterly abandoned the idea that facts matter, after all, so why shouldn't their supporters feel free to believe MLK was a nobody or that Thomas Jefferson rejected the argument in "The Origin of the Species" — published 33 years after his death?