More TrumpRegrets every day: Now the hard-right nationalists are losing their religion

He's not locking up Hillary, he can't deliver cheap health care and now he's a warmonger. This could get ugly, fast 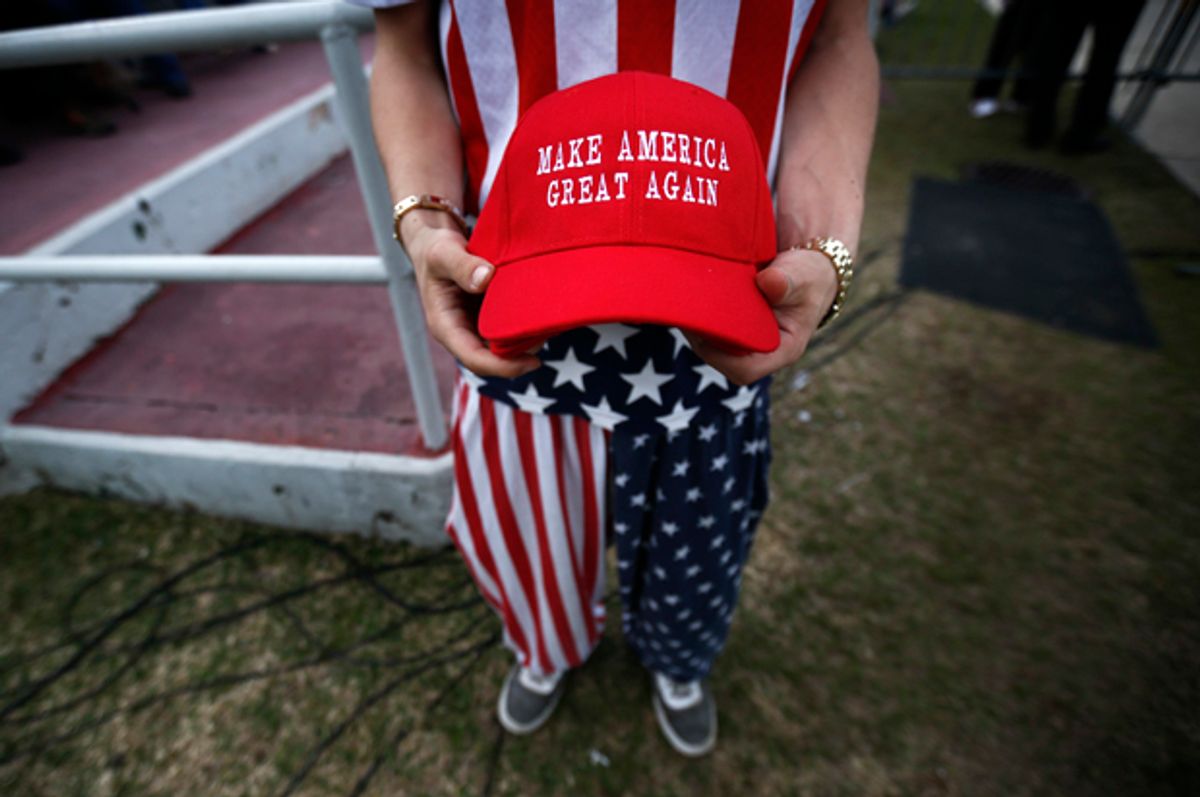 The story of the regretful Donald Trump voter has already become a cliché. It started even before the inauguration, with reporters venturing out into the wilds of real America to talk to the most fascinating people on Earth and find out how they're feeling on any given day. The Trump voter has a lot of feelings, you see. And we want to know about every single one of them, all the time.

During the transition before his inauguration we learned that a lot of Trump's voters were upset when their hero declined to arrest Hillary Clinton and "lock her up." Evidently when they heard him say, "drain the swamp," they thought that was what he meant. Indeed, the thrill of seeing the much-loathed former secretary of state clapped in handcuffs was the main reason many of them voted for him. For a time they could have put their hopes in House Oversight Committee Chairman Rep. Jason Chaffetz but alas even he seems to have lost interest.

It wasn't long before Trump voters began to complain of other apostasies, so many, in fact, that people began to collect them on social media. A Tumblr called "Trumpgrets" was created shortly after the election to chronicle all the articles about regretful Trump voters, and a Facebook page called "IregretvotingforTrump" featured ongoing testimony of remorse. A Twitter feed called Trump Regrets even received national attention for retweeting the posts of people who were upset with one thing or another. It's amazing how many there were, right from the beginning.

The Huffington Post interviewed six disappointed Trump tweeters just before the inauguration and while they were mostly upset about the lack of a Clinton prosecution they also worried that he was putting his son-in-law in the White House and dismissing all the emerging information about Russia. One man said simply, "I would still vote for Trump over Hillary any day of the week," adding, "I just wish he would follow through on all of the promises he made."

After the Obamacare repeal-and-replace debacle, we had another spate of reports from Trump country, with The New York Times reporting that many people were stunned to learn that the Republican plan would have raised their premiums. They couldn't believe that Trump's promises of much lower costs and much better coverage ("and quickly!") were nothing more than hot air. Like too many Americans they assumed that if a person is successful in business, he must be a genius who can do anything. (Of course, even if you believe that myth, the fact is that Trump is more of a rich celebrity than he is a successful businessman. You might as well trust Britney Spears to create a new health care plan.)

More recently, we've had stories of Trump voters who were surprised to find out that their family members were being deported under his draconian immigration policies. The Washington Post reported on a former Trump fan who thought the president was going to only deport the "bad hombres." It turned out he even meant her hardworking entrepreneurial husband who had been openly cooperating with the authorities for nearly two decades. It's hard to understand how someone in her situation could vote for a man who promised to end birthright citizenship and said he planned to deport the American-born children of undocumented immigrants right along with them, but she did. (In an even greater act of cruelty, these days the Trump team is threatening to separate mothers from their children if they try to cross the border.)

Still, it is difficult to fulfill a promise to jail a political rival who didn't break the law (especially when you're under a counterespionage investigation yourself) or to magically deliver a health care program for which you never provided any details. And Trump was pretty clear about his hostility to undocumented workers and immigrants of all kinds so it took an extreme lack of self-awareness to think he wouldn't crack down hard once he got in office. But he didn't stop there.

Salon's Gary Legum compiled last week a long list of Trump's broken promises and this week has brought us even more, ending with an abrupt about-face on  China, on NATO, on the Federal Reserve and most important, on his supposed commitment to keep America out of foreign military adventures. (He was always speaking out of both sides of his mouth on that last one.)

The Syrian airstrikes and the dropping of the Big Bad Bomb in Afghanistan yesterday has brought him a chorus of delighted fanboys. Sen. Lindsey Graham, R-S.C., led the pack with a tribute to the president's machismo, saying, "We've got a new sheriff in town." That undoubtedly thrills Trump and many of his supporters to no end. But this also marks what seems to be the end of the short-lived influence of "anti-globalist" Steve Bannon, which is creating a big new batch of regretful Trumpers — among his activist conservative base.

Politico reported that many such people are fit to be tied:

“It was like, here’s the chance to do something different. And that’s why people’s hopes are dashed,” said Lee Stranahan, who, as a former writer at Breitbart News, once worked with Bannon. “There was always the question of, ‘Did he really believe this stuff?’ Apparently, the answer is, ‘Not as much as you’d like.’”

The question is rather, "Did he ever believe in anything?" The answer is yes. He believes in strict law and order, military dominance, intimidating foreign leaders and making his family as wealthy as possible. This was not hard to see from his history. He's been talking about the same things for decades. And he is fulfilling that agenda to the letter.

If the economy doesn't destruct and Trump fulfills his promise to crack down on the border, unleash the police on "bad dudes" and fight Muslims wherever they are, most of his voters will happily forgive his trespasses. But the hard-core Republican activists expected a lot more and they're on the verge of joining the Trump regretters. If they do, they're going to make his life miserable.