Power to the people: A superior cast ensures that "Guerrilla" hits its target

Showtime's miniseries has its imperfections, but its performances carry the story to the end of its mission 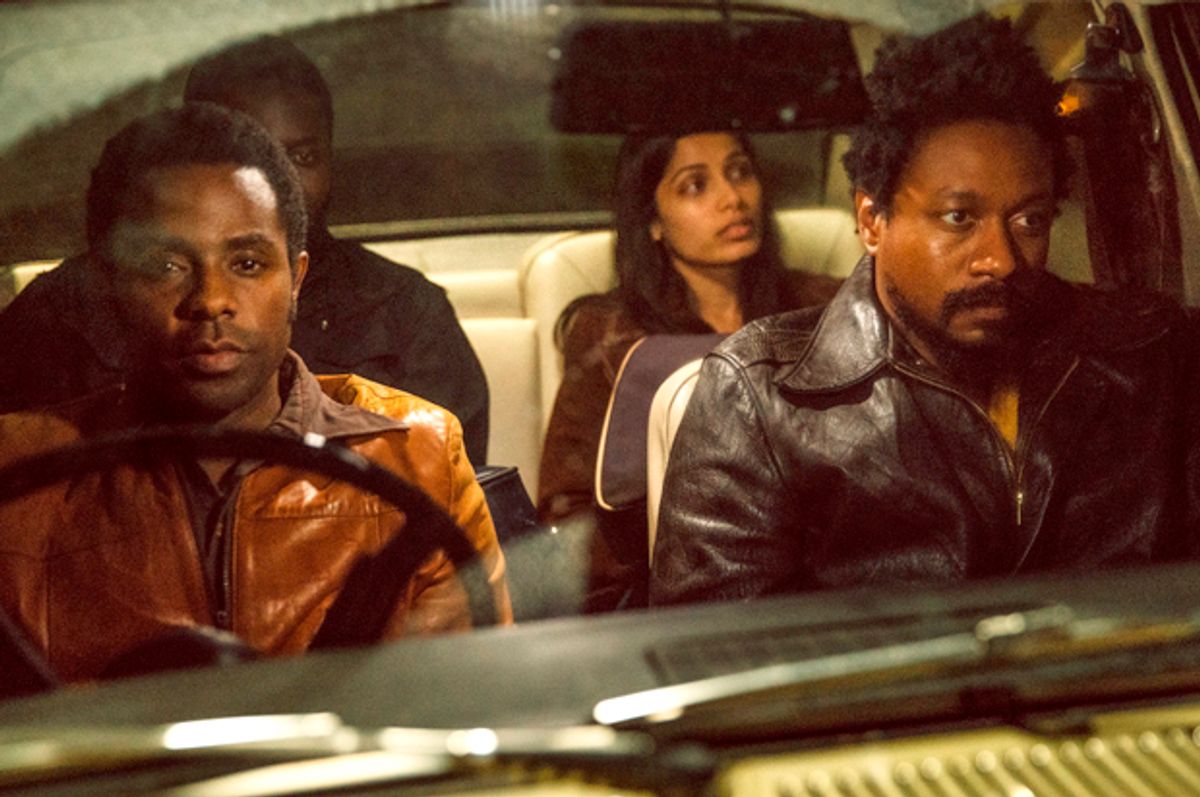 Revolution is never a tidy business. The players involved often find themselves at odds with one another, disagreeing on tactics, strategies and how far they’re willing to go. We see that today in reams of articles questioning the effectiveness of peaceful street protest, whether constituents flooding town halls are truly being heard, and whether Black Bloc tactics and “antifa” groups are hurting the battle to protect our democracy more than aiding the cause.

Those same questions play out Showtime’s limited series “Guerrilla,” kicking off Sunday at 9 p.m., although on a stage set decades in the past and in a different country, in 1971 London. There, a small fist of revolt curls into a formidable weapon when a couple witnesses the police beat a friend to death, leaving them no other recourse than to turn around and swing back in righteous rage.

Their strikes are haphazard, wide and blind at first. With more experience they land enough glancing blows here and there for the adversary to take them seriously, saving a knockout until the series’ final moments.

The collateral damage Jas Mitra (Freida Pinto) and Marcus Hill (Babou Ceesay) leave in their wake is significant, and some casualties are avoidable and regrettable, the result of naiveté and inexperience. But writer and director John Ridley grants the duo a measure of absolution in spite of the damage they do. If Jas and Marcus visit violence on a select few, it is only in response to a government that has visited violence on them and their communities for their entire lives without ever being held accountable.

Even so, “Guerrilla” leaves the door open for the viewer to question the validity and effectiveness of their tactics. The six-episode production itself is a reflection of Jas and Marcus’ convoluted evolution, a work held together by extraordinary performances yet muddled by too many character-driven subplots, a number of which never fully gel within the series’ restricted portion of time.

Setting the story in London allows Ridley and the drama’s writers to portray the Black Power movement with a sense of distance even if the passion stoking its heart is palpable, and the parallels to America’s Black Panthers and other militant Vietnam era-organizations obvious.

Within this limited space, and through Jas and Marcus, “Guerrilla” sorts through a pile of cultural double standards and prejudices infecting Britain and Europe to the core, the conundrum of favoring "patrials" over "non-patrials" and what, exactly, that means.

Jas is an Indian immigrant whose fire may mask her need to prove her worth. Marcus, an intellectual, is a native-born Briton whose dark skin automatically relegates him to second-class status within his own country. His options are limited and his rights virtually nonexistent; the same is true for Jas.

As they clash, their partners Dhari Bishop, a radical with a reputation (Nathaniel Martello-White) and his American friend Leroy (Brandon Scott) question how far they’re willing to go. “Guerrilla” nimbly lays out the competing philosophies and clashing egos that trouble the group’s cohesion.

More than anything, the show builds its tension on a sense of dangerous paranoia and frustration at the status quo. As shocking as the group’s militancy can be, the views disseminated by public figures such as Jas’ ex-lover Kent (Idris Elba, who also executive-produced the series), a famous proponent of nonviolence, can be utterly infuriating.

If the measures taken by Jas and Marcus do a disservice to the people Kent cringingly refers to as “good blacks,” the question remains as to why people of color have to prove their goodness in order to be granted the same rights as whites, who are never asked to announce or demonstrate their uprightness.

And to hammer at that point, “Guerrilla” depicts the cops on the Scotland Yard’s Black Power Desk as the personification of extremism cloaked in the colors of law, as intolerance and bigotry on a personal level bleed out and stain the justice system. If the gun-toting militants firing automatic weapons in public spaces are criminals, the drama posits, so too is task force with its boot on London’s black and Asian communities.

The world of conflicting personalities and motivations Ridley presents in “Guerrilla” can be dizzying, both informed by and at odds with a character’s culture and its place in British society. Nowhere is this confusion more prevalent than in Rory Kinnear’s repugnant, conflicted Chief Inspector Pence, whose naked racism cloaks a sense of inadequacy connected to his status as a Rhodesian immigrant. He may be white, but British people look down their noses at him with the same disdain that met the parents of his Irish partner Inspector Cullen (Daniel Mays).

Adopting a typical good cop/bad cop dichotomy, Cullen is softer in his approach than Pence — to a point — particularly toward Jas and Marcus’ friend Fallon (Denise Gough, in an inspired performance), an Irish woman who was in love with their friend who was killed. Pence, however, has a secret that goes against the grain of his deep-seated bigotry that’s at once too typical and inadequately explained.

Performances by a stalwart cast ensure that “Guerrilla” works in spite of these shakier elements. The production faced valid criticisms for giving an Indian woman the lead without including significant roles for black actresses. But Ridley answers that by making Jas’ ethnicity a vital part of the story; plus, Pinto burns brightly through the series, a brilliance matched by Ceesay’s quieter, more pensive sense of doubt. Because of them and stunning work by the rest of the actors, there’s never a moment that the viewer won’t want to see this story through to the finish. When all is said and done, isn’t that the mark of a successful mission?