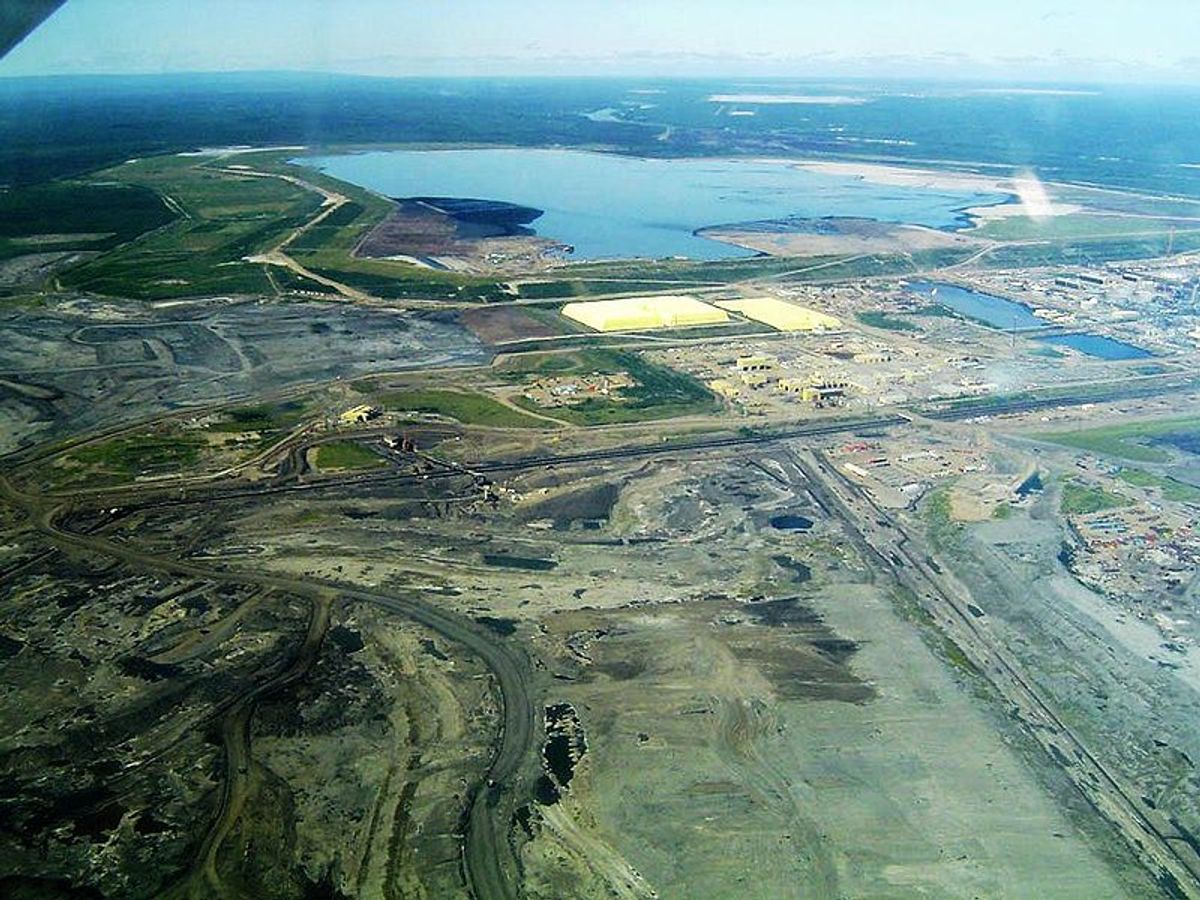 Syncrude's Mildred Lake mine site and plant near Fort McMurray, Alberta, Canada. It is the biggest oil sand mining facility in the world.
--

As global companies abandon the Canadian oil sands at a time of low oil prices and huge losses, some of them are also concerned that producing one of the world’s most carbon-laden fossil fuels may be bad business in a warming world.

A wave of sell-offs began last year when Murphy Oil and Norway’s Statoil decided to pull out of the oil sands. Royal Dutch Shell followed last month, selling most of its operations to Canadian Natural Resources as part of a $7.25 billion divestment. Shell will maintain a small stake in the oil sands, however.

Shell’s announcement was followed by Marathon Oil, which said it would sell its oil sands subsidiary to Shell and Canadian Natural for $2.5 billion. Finally, at the end of March, ConocoPhillips struck a $13 billion deal to offload its oil sands business to Calgary-based Cenovus Energy after losing about $1 billion in the oil sands each year since 2014.

“As a high-carbon intensity, high-cost producer, the oil sands are in trouble,” said David Keith, a physics and public policy professor at Harvard University.

Multinational energy companies, including ExxonMobil, Shell, Statoil, Total and others flocked to the oil sands over the past decade as oil prices spiked, betting that one of the world’s most expensive and polluting sources of crude oil would boom for many years.

The boom came and went. The reason is economics: Mining for oil sands is expensive and requires high crude oil prices to be profitable. But the oil sands industry was hit hard by the same technology that has rocked the coal industry — fracking.

Advances in fracking technology flooded North America with cheap and abundant shale oil and gas, helping to drive down global crude oil prices and leading to a crash in 2014. With oil prices remaining around $55 per barrel — about half the price at their peak — oil sands aren’t as profitable to produce as they once were.

The gradual expansion of global climate policy, which puts a premium on low-carbon energy, is also a threat to the oil sands, Keith said, a reality that some of the companies are now acknowledging.

Shell said in its annual report, released the same day as its oil sands announcement, that climate concerns are pressuring the company to cut its emissions, cancel major oil projects and recognize greenhouse gas emissions and climate policies as major risk factors.

Executive bonuses are now tied to the company’s emissions reductions. Reducing the carbon intensity is part of the company’s strategic plan, the report says.

Other oil sands companies also recognize climate change and concerns about emissions as a major risk.

The French company Total is gradually reducing its stakes in the oil sands but has not announced plans to leave. The company said in its 2016 annual report that greenhouse gas emissions regulations may force it to curtail or end some of its most carbon-intensive operations and energy projects. Total said its new strategy is to move away from developing the most polluting fossil fuels and instead begin investing more heavily in natural gas, which emits less climate pollution than oil sands.

Canada’s oil sands represent the world’s fourth-largest reserve of crude oil. Found mainly in Alberta, oil sands, also known as tar sands, are a thick and mucky clay-like substance that is shipped to the U.S. where specially outfitted refineries can process it. If built, the proposed Keystone XL Pipeline would connect the oil sands region to refineries in Texas.

Oil sands have to be strip-mined from Canada’s boreal forest, releasing more carbon dioxide into the atmosphere than a standard barrel of oil, which is pumped from wells.

U.S. State Department estimates show that production and consumption of a barrel of oil sands crude releases at least 17 percent more carbon dioxide than a standard barrel of crude, a figure that more recent State Department estimates say could be as much as 20 percent higher. Shell estimates that oil sands production requires seven times as much energy compared to the oil it produces from wells elsewhere in the world.

The additional carbon pollution will exacerbate climate change, reducing the likelihood that countries will be able to stop the planet from warming beyond the 2°C (3.6°F) threshold that scientists consider dangerous.

As they pull back from oil sands, global oil companies are focusing on fossil fuels development elsewhere, such as offshore oil and U.S. shale oil fields, said Mark Oberstoetter, an analyst for WoodMackenzie.

ConocoPhillips and Marathon have decided to focus on shale oil development in the U.S., while Shell is realigning its business after acquiring the British oil company BG, he said.

Shell, which will continue to have a small operation in the oil sands, supports Alberta’s greenhouse gas emissions cuts and carbon-pricing policies, spokeswoman Tara Lemay said.

“We retain an important stake in the success of Alberta climate policy,” she said.

But if the global companies are truly serious about reducing their carbon footprint, it makes sense for them to offload their highest carbon assets, said Josh Axelrod, an energy analyst for the Natural Resources Defense Council’s Canada Project.

“If those assets are also dragging down their profits, it makes that decision that much easier,” he said. “But there does seem to be more signs that these companies can see the writing on the wall and that they’re not going to be able to produce all of their reserves in a climate-safe world.”

Even as the oil sands’ future remains uncertain, analysts say some Canadian companies smell an opportunity for expansion as major oil companies flee.

“The oil price downturn has emerged as a rare opportunity to acquire large-scale assets that normally would not come to market,” Oberstoetter said.

Local and regional companies with more expertise in mining oil sands may be willing to take on the risk of expanding in the oil sands even as oil prices remain low, Murillo said.

For example, Shell is selling many of its oil sands assets to a regional company with local mining expertise, Canadian Natural, or CNRL.

Already one of the largest energy companies in Canada, Canadian Natural’s purchase of Shell’s operations allows the company to reopen and expand oil sands projects that Shell had cancelled or shelved, Murillo said.

“These are all business transactions,” he said. “They are not about abandoning or shutting down any oil sands assets, they are simply sales.”

Axelrod said he expects to see modest growth in oil sands production as projects started before the crash in oil prices begin operating.

“This is one of the big problems with the tar sands from a climate perspective,” he said. “If you build the projects, invest all that money up front, you can’t really afford to stop producing. They just keep on going, even if you’re losing money on every barrel of oil.”