Let me be misunderstood: The final episode of HBO’s “Girls” and how we really feel about Hannah Horvath 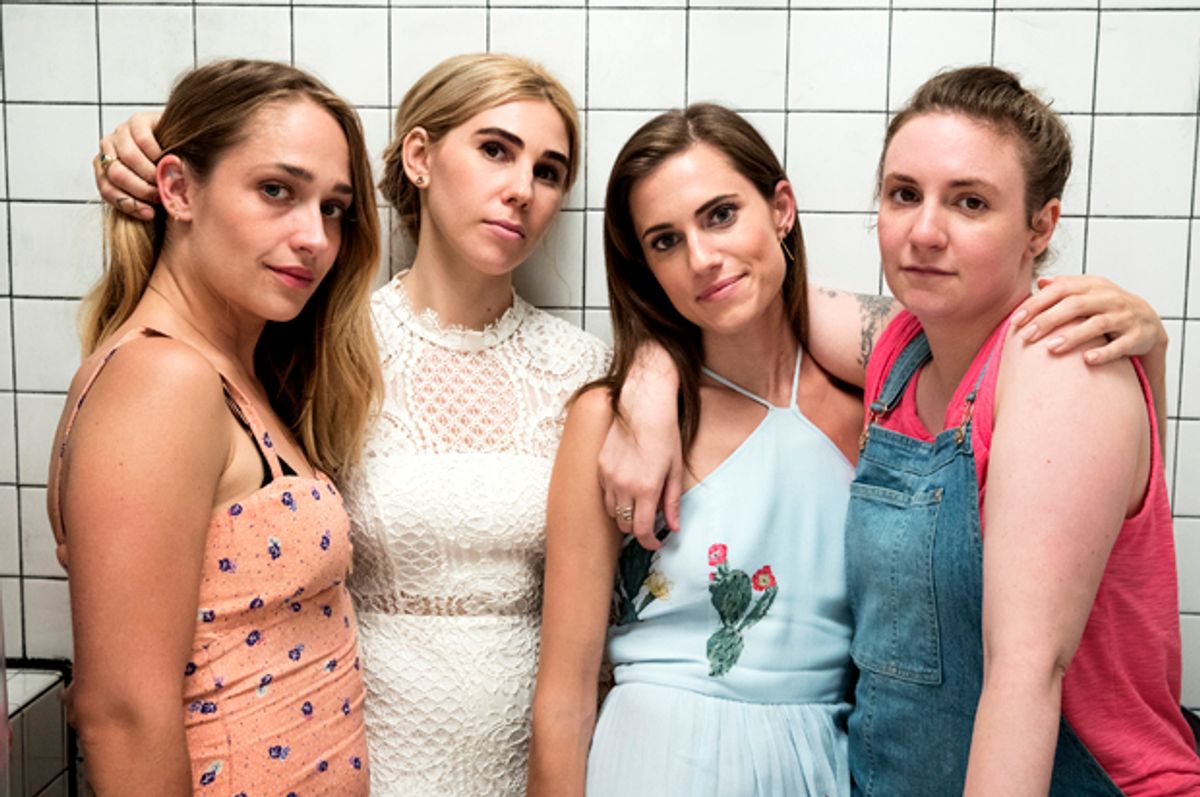 I admit it. I watch “Girls.” Even though I recognize its flaws, such as lack of diversity, I still love its thorny, self-involved, often unlikable characters, who no matter what transpires seem to float in a constant state of Saturn Returns. Maybe it’s because there’s something life-affirming about watching people who pathologically refuse to get their shit together. Maybe it’s the funny, evolved writing of this sixth and final season. Or maybe it’s just Andrew Rannells, pitch-perfect as ever. This show captured an aspect of the millennial New York experience: what it means to be a lost, white female with a BA from a private liberal arts college in Ohio and living in a crappy apartment in Brooklyn.

This season has its fair share of cringe-worthy fake-diversity moments -- in Dunham’s defense these moments aren’t singular to her; she just gets singled out for them -- for instance the black sidekick in Elijah’s “White Men Can’t Jump: The Musical” audition or the mystical Joy Bryant (“Parenthood”) talking about living her truth in the upstate gift shop. There’s a fine line between invisibility and tokenism and Dunham continues to tread somewhere between the two, though she has mentioned wanting her next project to be more inclusive. Way back in the wayback machine of 2012, she spoke to NPR about how she wrote the show from “a gut-level place,” and said that “each character was a piece of me or based on someone close to me.” In other words, write what you know, but only to a certain degree.

Unlikable protagonists are, of course, historically male and therefore likable. (Think Alexander Portnoy, Larry David or anyone in the Apatow Gang.) Meanwhile, the women of “Girls” resist both category and wily feminine pluck. This gets the internet’s panties in a bunch. Female protagonists either need to be nice or fall in the mud; otherwise the world spins off its axis. They need to stay in their box and keep their underpants on at all times. (Think of the internet uproar when Megyn Kelly left Fox for NBC versus when it recently rejoiced over Bret Stephens leaving the Wall Street Journal for the New York Times. One change is embraced. The other engenders panic and rage. It’s a classic case of pee-pee versus woo-woo.)

Hannah Horvath, meanwhile, is hard to categorize. A radical feminist one moment, a hilarious if self-involved woman-child who can’t hold a job or see beyond the orbit of her own experience the next, she — and her embodiment Lena Dunham — seem to enrage a mass of viewers who claim to be feminists themselves yet cleave to some long-lost nineties vision of Carrie Bradshaw. Yes, both characters are female writers who live in New York, and “Girls” is about four white, single female friends too, but let’s be honest, the comparison ends there. Hannah would never live on the Upper East Died and Carrie would never, ever flash her waxed vag for all the Manolo Blahniks at Bergdorf’s.

Speaking of vagina, six seasons later, Dunham’s remains up for debate. Is it a feminist statement, critics still wonder? Is Dunham’s naked body about the representation of the female body in the media or is she just an exhibitionist? This question is, of course, in and of itself, anti-feminist — the raging debate over who owns the female body — but I quibble. Having contorted themselves by watching male-dominated media for so long, even women hop on this bandwagon. Dunham is fat-shamed. Slut-shamed. Her own character conflated with Hannah’s until she is trolled off of Twitter. And now this character, this lost, made-up character who doesn’t have even have the guile to get herself Obamacare, who drinks ’till she barfs off the side of bunk beds, is going to be a mother! Confusing! Disgusting! Beautiful!

As the credits rolled for the penultimate episode, my wife turned to me and asked me if I thought that was the final episode. For a moment, we held each other, unsure. It did have a certain finality to it. Not to mention a feminist spin and real-life pathos we both liked: the female friends reunited and dancing, interspersed with shots of Hannah going to some Bard-like university to become a visiting professor of “internet writing” (go with me here) and have her baby on her own. It was reminiscent of the last scene of “Private Benjamin,” in which Judy Benjamin (Goldie Hawn) punches her French fiancé in the face and storms out of her own wedding. There’s a famous long shot of her walking away in her wedding dress, then flinging her veil in the air. Where is Judy going? We don’t know, but she is finally empowered and free, beholden neither to her parents nor American Jewish upper-middle-class mores. And this was 1980!

As the final episode approaches, of course the HEA-girl in me wants Hannah to end up with Adam (okay, Bed-Stuy Mr. Big). The season has been gravitating toward this reunion. A sudden fantasy emerges of Adam adjuncting at Hannah’s college, a sweet Mr. Mom to Paul-Louis' (Riz Ahmed) baby while Hannah becomes a professor slash internet celeb -- but there I go writing fanfiction. There’s something about Hannah’s tears when Adam finally proposes that indicate a certain resignation to the impossibility of it all. Much like the poignant moment when Jessa (Jemima Kirke) gives Hannah that dress as a baby present and Hannah tells her that she’s actually having a boy, but takes the dress anyway. As if to say, you think you know me, but you really don’t.