Now every tinpot monster is going to want some nukes 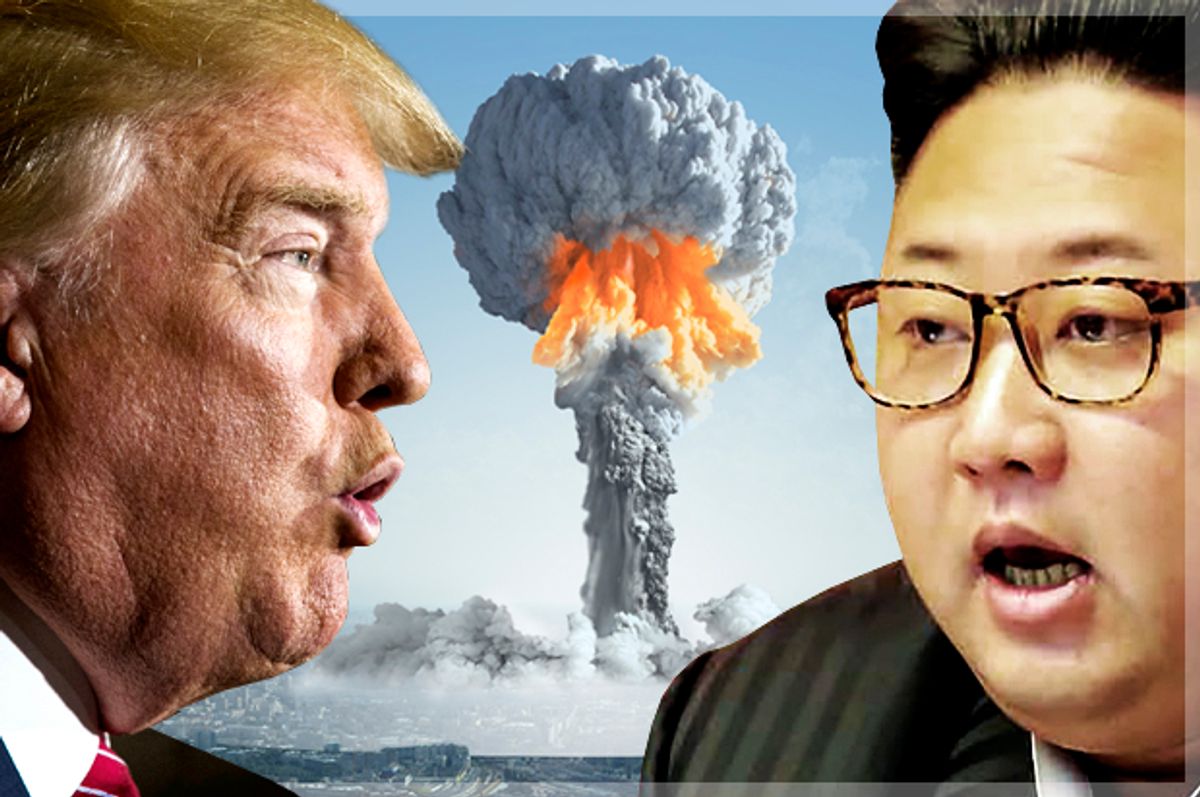 You know how far it is from Damascus to Pyongyang? It’s 4,600 miles. If they had air service between the two outlaw capitals, it would be about an eight-and-a-half-hour flight, about as long as it takes you to fly from Dallas to London. But the two cities may as well be a million hours and a zillion miles apart when you consider how differently they are treated by the United States.

Let’s begin with North Korea. A country of 25 million people, the vast majority of whom are impoverished peasants, North Korea has been poking red-hot knitting needles into the eyes of the United States and pretty much everyone else in the world since the stalemated end of the Korean War in 1953. Belligerent, heavily militarized, with only China as an ally, the country has basically served to perpetuate the rule of, and enrich the families of Kim Il Sung, Kim Jong Il and Kim Jong Un, who have run the place like a concentration camp for more than six decades, and even in a world filled with authoritarian regimes, they’ve given the word dictatorship a bad name.

Syria, a country of 17 million with immense natural resources in gas and oil, has seen its economy run into the ground by falling oil prices and war and also currently enjoys only one ally, Russia. It’s another authoritarian jewel that has been run for the last 50 years by the Ba’ath party and the Assad family’s daddy Hafez and boy-king Bashar, a pair of thieving, murdering bastards who have also endeavored to run the reputation of dictatorships into the ground.

Of the two tasty little authoritarian hot spots, North Korea has been by far the busiest when it comes to pissing off the USA. Way back in 1965, they tried to shoot down an Air Force Lockheed EC-121 reconnaissance plane 50 miles off the coast of North Korea over the Sea of Japan. The plane was damaged but managed to limp back to its base in Japan. In 1968, they infamously seized the Naval reconnaissance ship the USS Pueblo, holding the crew prisoners for almost a year. The USS Pueblo is still in North Korean possession and is a tourist attraction there. In April of 1969, they succeeded in shooting down another EC-121 reconnaissance plane, killing all 31 airmen aboard. By this time, the U.S. was pretty tired to North Korean military provocations and ordered up a large array of potential military responses, including bombing North Korean military targets and airfields, shooting down their aircraft and/or sinking their naval vessels, mining their harbors and entirely blockading the country. In the end, the Nixon administration, brand new to power, settled for a protest at the U.N. and a bunch of empty saber rattling.

The North Koreans kept up the provocations over the years with various incidents along the DMZ. In 2003, they intercepted another U.S. reconnaissance plane but didn’t shoot it down. In 2010, they sank a South Korean naval vessel in international waters in the Sea of Japan. But by then, they were pretty much finished with aggressive international incidents. Know why? Because in 2006, they conducted their first successful test of a nuclear weapon. They did four more tests between 2006 and 2015, all the while testing new iterations of ballistic missiles. And why, you might ask, didn’t we give one or more of the Kim outlaw regimes a good military spanking over all those years? Well, the presence of an estimated 13,000 heavy artillery pieces along the DMZ aimed straight at the South Korean capital of Seoul about 30 miles away, capable of flattening the place in about an hour, might explain it, and it didn’t hurt that they had 2 to 3 million men under arms during all that time. Suffice to say, the idea of going to war with North Korea was an option that produced diminishing returns since our last unsuccessful war with them, and they have endeavored to keep the odds in their favor by ramping up their conventional and now nuclear capabilities ever since.

Syria, on the other hand, has been much less lucky. They’ve been given a series of bad military spankings, principally by Israel, over the years, most recently by a Trump administration under fire at home and grasping for a “victory” overseas. Sending 59 Tomahawk cruise missiles winging into an empty airfield isn’t any military strategist's idea of a conventional “victory,” but let’s face facts, it was the best they could do at the time. But Trump was only playing pitty-pat with his missile strike on the empty airfield. Beginning in 2014, the U.S. and its allies Bahrain, Jordan, Qatar and Saudi Arabia have conducted 14,000 air strikes against ISIS in Syria and Iraq, dropping more than 20,000 bombs. Some 11,000 of those were U.S. airstrikes, and 2,000 of them were against targets in Syria. We have also been involved in bombing ISIS targets in Libya, Nigeria and Yemen. Suffice it to say, we’ve dropped a lot of bombs on a lot of land in a lot of countries, all in pursuit of the vaunted “war on terror.” Now you might ask what those countries had in common, and that would be a very good question, because what they had in common was being relatively powerless to counter our airpower or that of our allies. Toothless countries, in other words, who can’t fight back.

And you might ask, How are those countries different from North Korea?, and that would be a very good question, too. North Korea isn’t toothless. North Korea has always, since way back in 1953, had the military might and willingness to fight back. And now North Korea is a nuclear power, with nuclear bombs and increasingly sophisticated ways of delivering them. They already have ballistic missile capability to hit our allies South Korea and Japan with nukes, and as we’ve been told about a billion times by saber-rattling hawks, they’re working on a super missile that will one day reach “the west coast of the United States.”

That’s why today, in the 13th week of the Trump presidency, we don’t just put North Korea over our national knee and administer them a good spanking for all of the military fucking around they’ve been doing. North Korea has shown that having nukes and other heavy military capabilities pretty much shuts down the whole idea of military corporal punishment. In fact, North Korea has shown dictators the way. Ask Muammar Gaddafi; he’ll tell you. Oops. Forgot. Gaddafi lost his life learning that lesson. Well, in Gaddafi’s absence, you can ask Vladimir Putin. We haven’t given him a good military licking since he invaded Ukraine and annexed Crimea, because. . . nukes. And we’ve put up with a whole boatload of shit from Pakistan, which has been supporting the Taliban and generally making life miserable for our client state Afghanistan for the past 15 or so years. Once again. . . nukes.

You think the rest of the world’s dictators aren’t looking and listening and learning? The way to inoculate yourself against American meddling in your kleptocratic, human-rights-violating little dictatorship is to get yourself a few nukes and slap together a few missiles or just go out on the international arms market and buy yourself a couple and sit back and kill your own people and steal all their money and do whateverthefuck you want.

You want to talk about the law of unintended consequences? Going around and kicking the asses of little guys we don’t like has taught them a lesson. So thanks, all of you saber-rattling hawks down in Washington, D.C., who’ve been promoting the idea of being the “world’s policeman” all these years. Nukes are now mandatory for dictators.