Who in the hell is Mick Mulvaney?! Everything you were afraid to ask about this suddenly important person

Got whiplash from the news cycle? Find yourself asking "who?!" Here's deep dirt on the federal budget's Grim Reaper 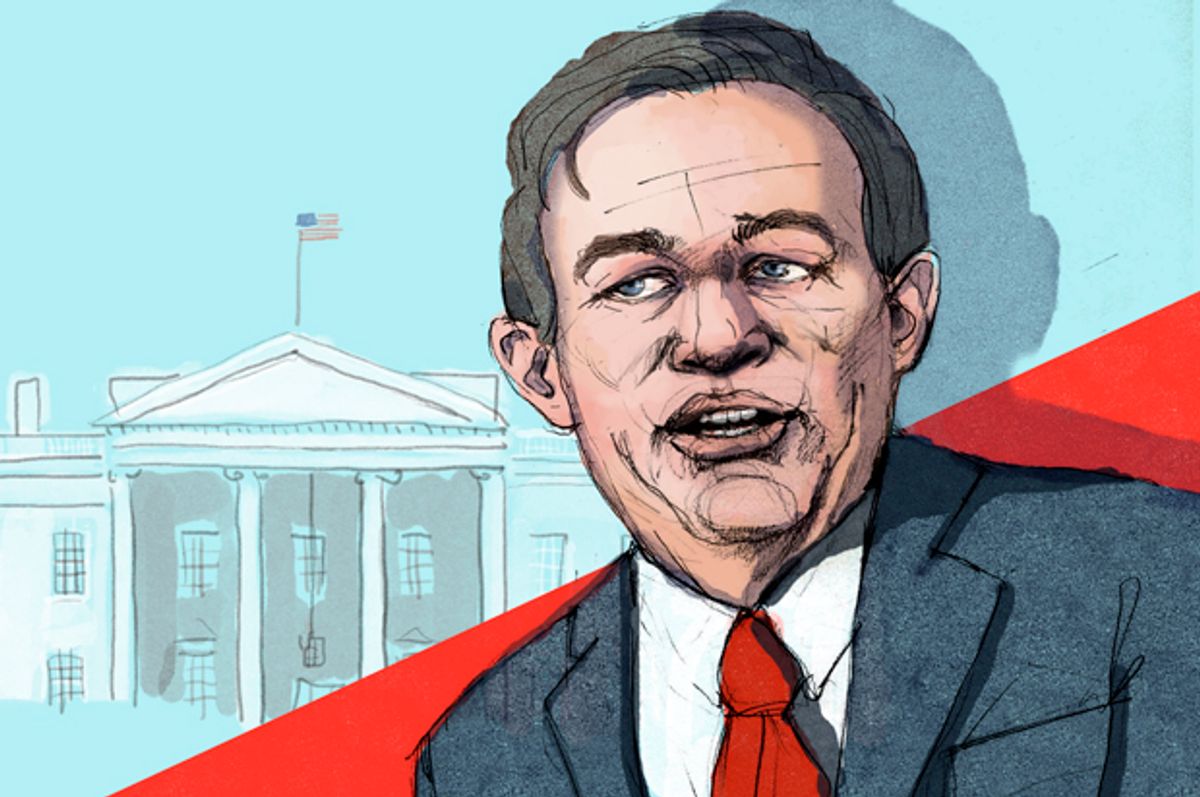 (In this brand new, hastily conceived premise, Salon will use the otherwise unlimited space of the site to profile a person in the news that has until recently lived largely under the radar. And by under the radar, we mean above gratuitous satire.)

OMG! OMB: Confirmed Feb. 16 by the Senate as director of the Office of Management and Budget, 51-49, on last second field goal by Rand Paul.

Every Democrat in the Senate voted against confirming Mulvaney, as well as John McCain, who did not like his position on cutting the defense budget or voting to rescind the work visa of Bruno Tonioli on “Dancing with the Stars.”

CUTTING REMARKS: He is currently preparing a “guidance letter” that will outline his goals to reduce the size of federal government agencies. Luckily, he will not take Sean Spicer’s suggestion to begin the guidance letter “Dear Kitty . . .”

Among the federal programs Mulvaney has proposed cutting are Meals on Wheels, PBS, the Lincoln Memorial Lap Dance Brigade, the Mitch McConnell Jowl Preservation Society, Meals on Welts, Seals on Wheels, Any Actor with a British Accent doing a guy with an American Accent, the Bureau of Fudge and Europop.

Last month, he claimed block grants to Meals on Wheels should be cut because the food program for the elderly was “just not showing any results.” When pressed for specifics, Mulvaney cited an 86-year-old man in Crawfordsville, Indiana, who kept sending the wine back.

Meals on Wheels has been a national program since 1974, although the first-home delivered meal service for seniors in the U.S. started 20 years earlier in Philadelphia, when Dick Clark sent a waitress on roller skates with a malted to Howlin' Wolf’s father, Shut-in Wolf.

DRACO-NEA-N ERA: Mulvaney has been quoted recently as saying, “Why should coal miners have to pay for PBS?” He amended the quote the following day when he added, “And another thing. Why didn’t Muammar Gaddafi ever get promoted from Colonel? If The Professor on 'Gilligan’s Island' could make a radio out of two coconuts and a conch shell, why couldn’t he make a raft? And why don’t they build the whole plane out of the material used for the black box?”

ROAD TO THE SWAMP: Mulvaney served as a U.S. representative from South Carolina’s 25th district from 2011 to 2017. He primaried and defeated Democrat John Spratt, who had held the seat for 27 years, thanks in part to a blistering negative ad that showed Spratt’s wife eating lean.

Mulvaney was aided by a fundraising organization called the Commission on Hope, Growth and Opportunity, which was later accused of violating campaign finance laws and disclosing false information to the IRS. Which pretty much answers the question “What kind of opportunity is the Commission on Hope, Growth and Opportunity looking for?” Thanks to anonymous donors and lobbyists, the group raised $30 million for Mulvaney, almost all of it in Confederate money.

He was known as one of the GOP “Young Guns,” a group of first-time congressmen who were elected as part of the Tea Party movement. The “Young Guns” were named for the popular Brat Pack movies of the late 1980s, although they prefer Emilio Estevez go by the name Leo Sheen.

In 2015, Mulvaney voted against a government-funding resolution because it involved a debt limit increase and included funding for Planned Parenthood. He remained intractable on Planned Parenthood, but changed his opinion on the debt ceiling when China threw in 435 GoPros.

BEFORE THAT: In 2006, his first year in the South Carolina State Senate, the Palmetto Family Council honored Mulvaney as Freshman Legislator of the Year for his work on the South Carolina Ultrasound Bill, which, if passed, would have technically granted an unborn fetus human rights because he/she now had a photo ID.

PERSONAL LIFE: Married to Pamela West since 1998. Although, if his proposed budget is passed, she will only come in twice a week.