Notes from a trailing spouse: Welcome to Mars 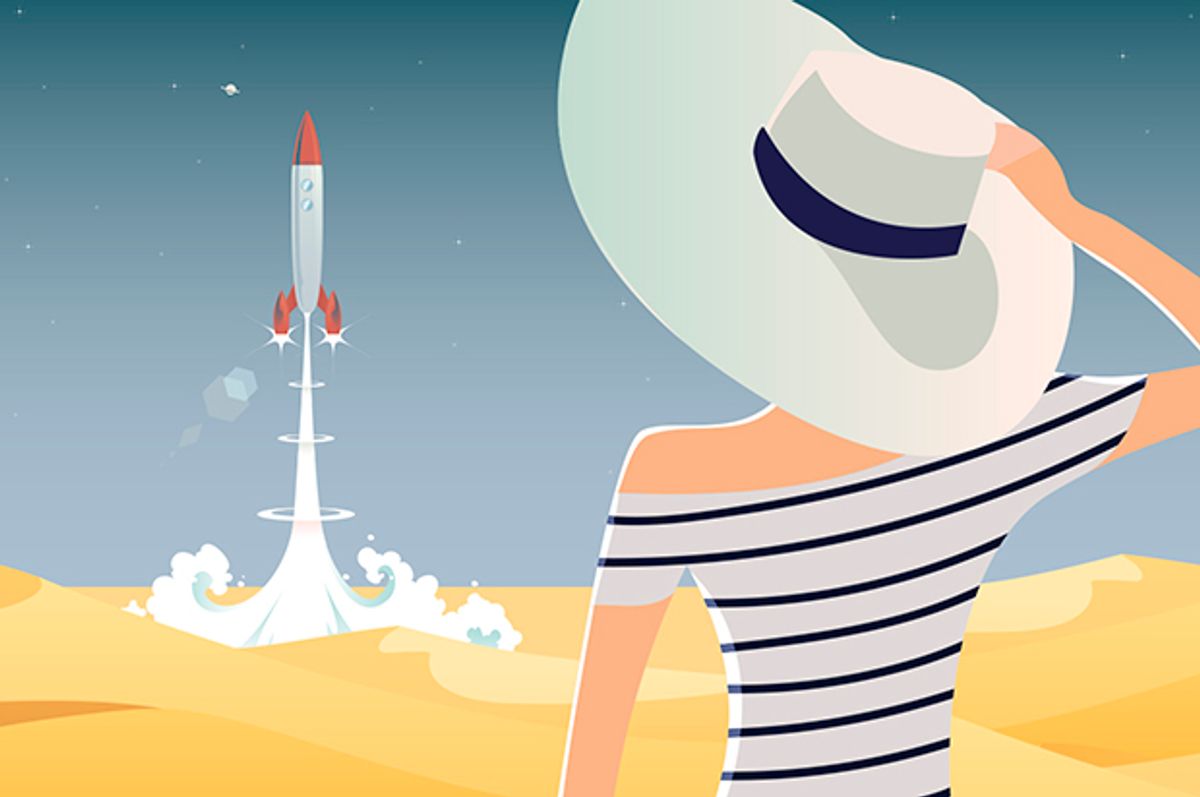 In my oven I have celery roasting.  Sliced thin, then made thinner yet through the food processor, tossed with olive oil and roasted until it’s dry, near crispy sticks. They never really gets totally crispy but close enough that I shower them over everything from pasta to toast. I have the timer on to make sure I don’t burn them. It’s ticking away and sounds exactly like the clock that was ticking and driving one potential astronaut bonkers in the film “The Right Stuff” while the other, the ever cool Gordo Cooper, played by the even cooler Dennis Quaid, just hung out in that fake capsule reading Life magazine and not giving a hoot when sudden bursts of steam obliterated his view.

Me. Here. In Abu Dhabi. This apartment. My capsule. Outside, a hostile environment with temperatures that threaten to melt your eyeballs when you step out the door. A dust storm is kicking up that will make my lungs ache and give me a hacking cough. And in the near distance, the city itself, a futuristic hologram rising up on desert sands.

When panic, that stealthy menace, sets in, I start cooking; hence the celery, to be followed by a chicken broth, then. . .  I have been known to cook every single thing in the house on days when being here in the desert feels like I’m living on Mars.

To be perfectly honest, I am surprised and ashamed that I have to resort to these tactics, since my trick to fight panic when I lived back in New York was to pretend I actually was on Mars. “Imagine,” I would tell myself,  while feeling my pulse and running to the mirror to see if I looked as insane as I felt,  “not being able to put one little toe outside without having your lungs sucked out through your nose before, a nanosecond later, you are freeze-dried. So what the hell is your problem now?” (My info on Mars deaths comes exclusively from movies like “Mission to Mars” and “Total Recall.” In fact, and this is a deep confession, I get most of my information about not only lung-sucking deaths but how to live on this blue marble, Earth, from movies that take place in space.)

Then I moved here.

At first I thought, having been schooled in survival by watching "Aliens" too many times to count (1 and 2), by a lifelong habit of “Star Trek” (up to Voyager and onto Chris Pine as Captain Kirk), by “Battlestar Galactica,” and pretty much every other movie or TV show no matter how tangential the connection with space, this would be my moment to prove I have the mettle, the stamina, the courage and the resolve to thrive in a place that a mere 60 years ago was doing a very credible imitation of an exoplanet, a place with breathable air but not much else to sustain life.

Now you may think I am exaggerating, and for that I make no apologies, but I am not the only one who thinks this place is outer-worldly.

In 2014 the U.A.E. set up their very own space agency, and in that short time they’ve planned and designed an unmanned spacecraft to fly to Mars in 2020 in hopes of studying its atmosphere. Besides having oodles of money and the need to spend it on something, there was another reason a mission to explore Mars seemed such a good fit. Omran Sharaf, the mission to Mars project manager, rightly pointed out in an article I read in Abu Dhabi World magazine in the lead-up to the International Day Of Human Space Flight, which took place on April 12th in case you missed it, anyhow, he was quoted as saying, “If you look at space and compare that to the U.A.E., we’ve got a very similar set of challenges. Space is an area with very limited resources: no water, no food, and no oxygen. The U.A.E. is also a very harsh environment; it’s hot and humid, with limited water and few agricultural resources.”

All very good points, but I don’t think the director went far enough. I think he should have offered up Abu Dhabi as an earthbound view into a fantastical future in space. Christ, half the buildings here look like they are straight from the set of early “Star Trek” episodes. There’s a building that resembles a giant amoeba (Yas Viceroy Hotel). Another evokes the smoke from Aladdin’s Lantern (Capital Gate Hotel), And, of course a sky puncher (World Trade Center Towers). And then there’s one that flat-out blows all these other buildings out of the water and it looks exactly like a spaceship, the as-yet-to-open Louvre Abu Dhabi museum, a domed disk lit by a thousand lights poised as if it’s about to take flight.

There’s no denying that all these forays into space are our first baby steps to one day living off this lovely planet, and I also think the children of this fair country would make boffo astronauts. Unlike me, who, while wanting to have the heart and guts of a star voyager, right now has an oven full of roasting celery and is on the way to cooking everything in the house because of this feeling of claustrophobia that has come over me now that it’s too damn hot to take a walk outside. Matters aren’t made better when I do step outside with the dogs and I am confronted with the fact that every single plant -- bush, flower, or tree -- is kept alive by what amounts to basically an IV drip of water administered from endless miles of black tubing, which, naturally, makes me think of everything else that is needed, from vast desalination installations to the huge energy plants, to cool us hot-blooded creatures grasping at life, and it all seems so tenuous and frail.

But to a kid who has grown up here, this must all seem normal. And as such, I can just see a couple of hundred years from now on some spaceship hurtling off to explore the Delta Quadrant, or in a newly established outpost on an uninhabited exoplanet, a fifth- or sixth-generation former Abu Dhabi citizen, happily breathing recycled air, eating food spit out by a replicator, staring out at that hostile environment and not seeing a lung-sucking death but limitless possibilities. I envy that, I truly do.