"Fool me once, shame on me, fool me twice, shame on Jews!” yells Spicey, making still more cultural gaffes 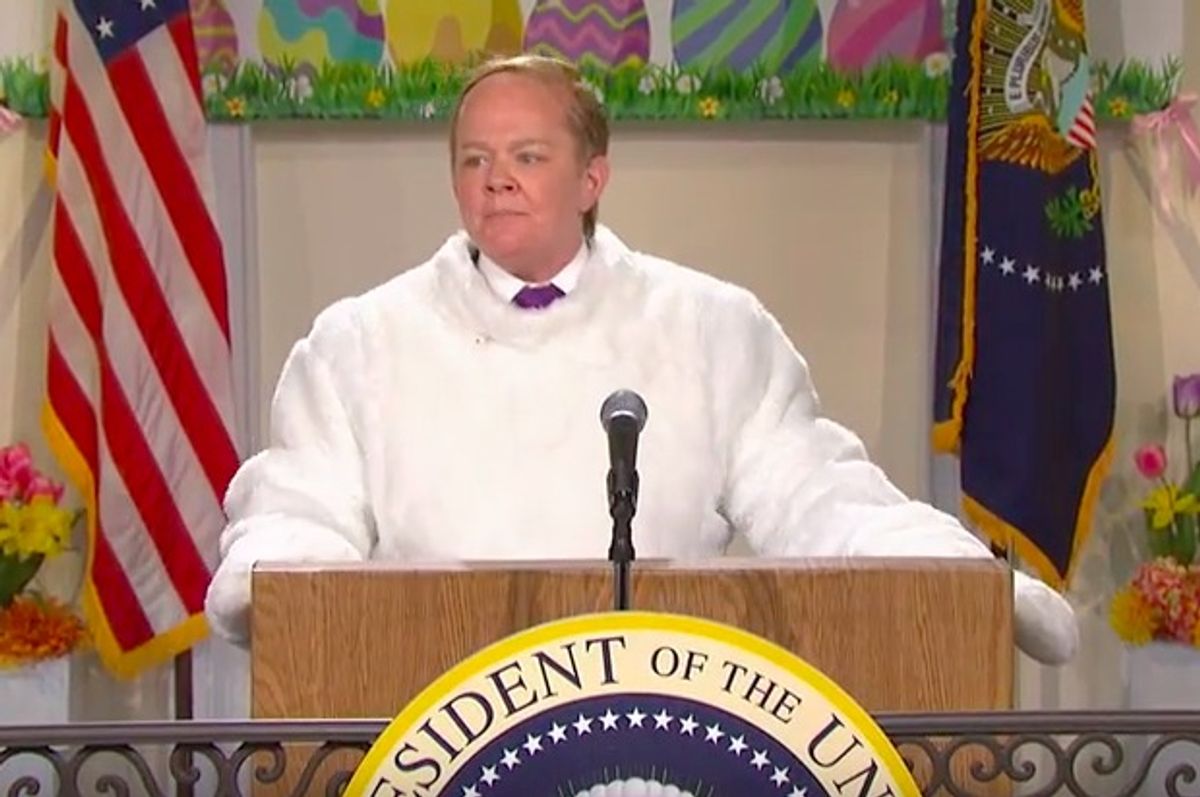 Melissa McCarthy's Sean Spicer as the Easter Bunny on SNL
--

Melissa McCarthy returned as Sean Spicer dressed as the Easter bunny at the White House Easter Egg Roll. Referring to the real Spicer's remark last week, when he said "at least" Adolf Hitler didn’t resort to using chemical weapons on his own people, SNL had some fun with the related criticism Spicer has received. To boot, Spicer made the comment on Passover.

“OK, you all got your wish this week,“ yelled McCarthy as Spicer. “Spicey finally made a mistake. As we all know, President Trump recently bombed Syria while eating the most beautiful piece of chocolate cake American has ever laid eyes on!" Spicer couldn’t get the name of Syrian leader Bashar al-Assad right, calling him "Bazooka Felicia Amad Rashad", and bungled more pieces of religious history and genocide. The real Spicer last week called concentration camps "concentration centers". McCarthy's Spicer said, “I clearly meant to say “concentration clubs! And it would be great if the nitpickers could try to see the big picture, and didn't solely focus on every little slur and lie I say! And p.s., I'd like you to know I am am sensitive to the fact that they were sent there on trains, but at least they didn’t have to fly United, amirite?”

Soon, it was time for “Spicey” to pull out the illustrative dolls McCarthy has used in nearly every SNL skit to make Spicer’s character seem given to childish exposition. “In the spirit of cultural unity,” said Spicer, “I thought I could shed some light for all the goys on this most sacred holiday, Passover. Using Veggie Tales puppets (a Christian morals—based animated children’s TV show reference), Spicer illustrates the story of Moses and pharoah, saying Egypt's pharoah was worse than Hitler. "Fool me once, shame on me, fool me twice, shame on Jews!” he yelled.