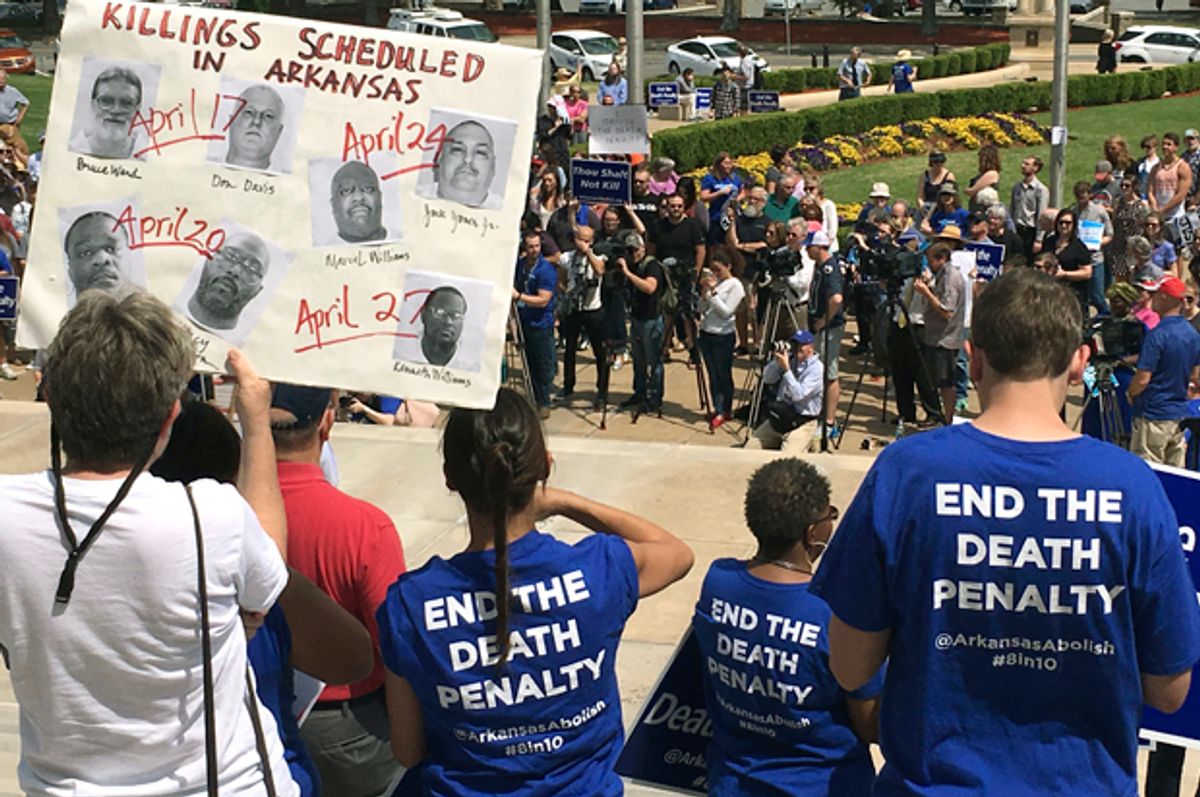 In the summer of 1999, Clayton Lockett and two accomplices, including a man named Shawn Mathis, were burglarizing a home when they were interrupted by 19-year-old Stephanie Neiman as she dropped off her friend, who happened to live there. Lockett attempted to grab the keys to Neiman’s new Chevy pickup truck, and so she put up a struggle. Consequently, Lockett beat her, bound her arms, mouth and legs with duct tape and proceeded to attack Neiman's friend, as well as another resident of the home and that person's 9-month-old child.

Neiman and her friends were abducted and driven out to a remote country road. Lockett and his victims waited while Lockett’s accomplice, Mathis, chipped away at the ground, digging a small grave along the road. Neiman was shoved into the burial ditch and, while there, Lockett shot her with a sawed-off shotgun. Neiman miraculously survived and began pleading for her life. Another shot was fired, but this time the gun jammed. A third shot hit its target.

But, amazingly, Stephanie Neiman was still alive. So Lockett and Mathis buried her anyway — alive.

Fast-forward to April 2014. After being prosecuted, convicted and sentenced to death, with the ruling upheld by an appellate court in Oklahoma, Lockett was scheduled to be executed by lethal injection at the state penitentiary in McAlester. The chemical cocktail used for the execution hadn't been tested. The Guardian's Katie Fretland reported earlier that week:

The state plans to lethally inject Lockett . . . with midazolam followed by vecuronium bromide and potassium chloride. Florida has used a similar method, but it employed a dose of midazolam that is five times greater. And Ohio used midazolam with a different drug, hydromorphone, in the January execution of Dennis McGuire, which took longer than 20 minutes.

Oklahoma corrections spokesman Jerry Massie briefed the media and said the executions will likely take longer than normal, because the first drug is expected to work more slowly.

In spite of Massie's eerie caveat, it appears as though corrections officials administering the injections were very surprised when the execution went nightmarishly awry.

Ten minutes into the procedure, Lockett lapsed into unconsciousness. But then minutes later, he began to writhe and convulse. The Associated Press reported that Lockett was "clenching his teeth and straining to lift his head off the pillow." Spectators were blocked from continuing to view the scene. The execution was finally aborted after an agonizing 24 minutes. But Lockett died of a heart attack more than an hour later.

It turns out the chemicals failed to rush into Lockett's body quickly enough — something having to do with a "vein failure" — and hence the slow death. Clayton Lockett was sentenced in a court of law to die, and death is what he got, although it should never have happened in that very cruel and very unusual manner.

Regardless of what Lockett did to land him on death row, we have a Constitution that expressly forbids cruel and unusual punishment. Until a federal judge issued a temporary injunction on Saturday, the state of Arkansas was planning to execute eight convicted criminals in the span of 11 days, beginning on Monday — two per day for the first six convicts. As of this writing, Arkansas Attorney General Leslie Rutledge has appealed the injunction to the Eighth Circuit Court of Appeals, and whether the executions will proceed according to the original schedule is not yet clear.

Why exactly are corrections officials cramming so many lethal injections into such a relatively short period of time? It turns out that a key chemical used in the executions will expire and will no longer be legally usable at the end of this month. In other words, Arkansas officials hope to blast through their supply of midazolam, one of three chemicals used in the process, before it goes bad.

Midazolam should sound familiar since it was the same sedative used in the botched execution of Clayton Lockett three years ago, almost to the day. Additionally, the Lockett execution was part of a doubleheader of executions to be carried out during a single night. A report on the Lockett execution was issued by Oklahoma later in 2014. One of the recommendations included in the findings was that executions should only occur with a seven-day buffer between them.

Arkansas is ready to do three doubleheaders in the next 11 days, with three using one of the same drugs that failed so spectacularly during the Lockett execution. Oh, and the corrections officials tasked with performing the executions have never worked with midazolam before. What could possibly go wrong?

You don’t have to be an anti-death-penalty activist to see the horrendous nature of what happened to Lockett or what may be about to happen in Arkansas. According to a recent study, 4.1 percent of convicts sentenced to die, or about 1 in 25, happen to be innocent. That alone should force us to re-evaluate the death penalty. The unconstitutional cruel and unusual nature of our executions should eliminate the process entirely. There's no reason, in spite of the brutal nature of his crimes, that Lockett should have died in such a medieval way. His sentence was death, not 24 minutes of what can only be defined as state-induced torture, followed at long last by death. Torture wasn't part of the deal; nor is it for the felons on death row in Arkansas.

Do I believe the world is a better place without Lockett in it? I have to be honest and say absolutely yes. His crime was vicious and unforgivable. But that’s in no way an endorsement of the way his death occurred or our system of capital punishment as it currently exists. Executions, if they are to continue in America at all, should be quick and rare events, reserved for the most vile and unrepentant offenders.