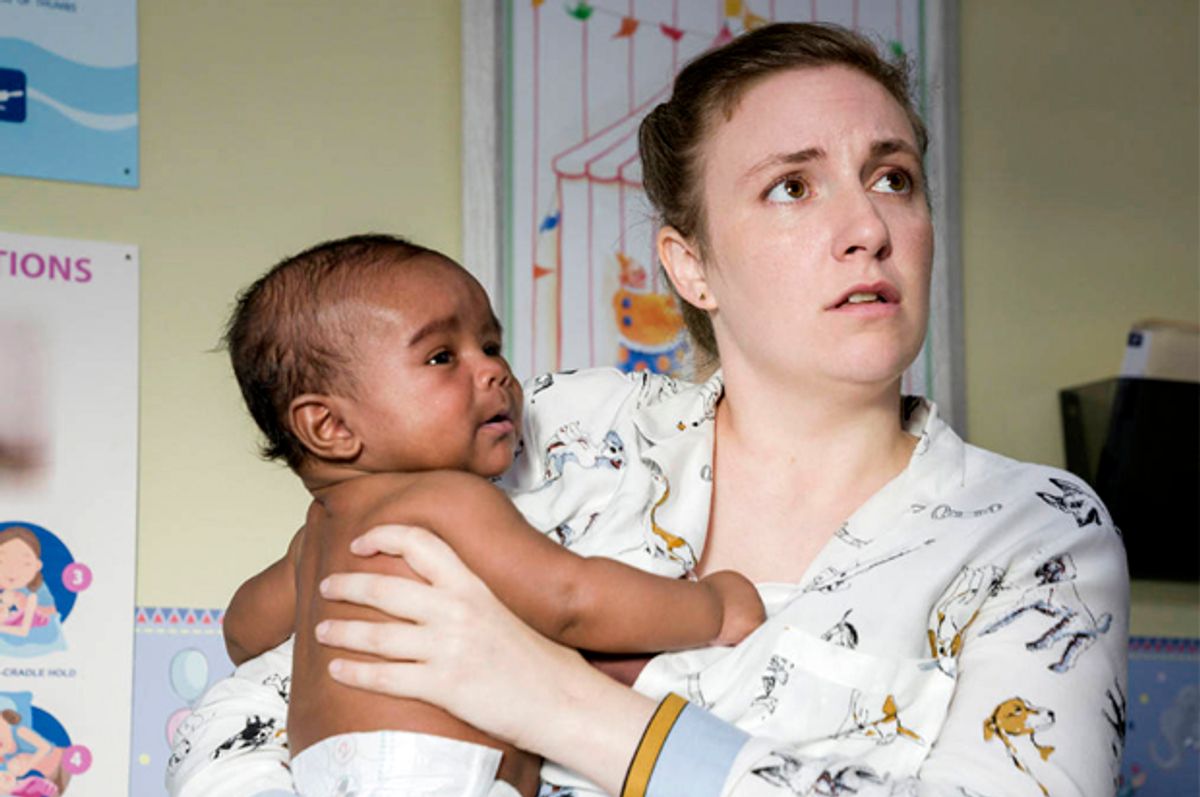 HBO’s “Girls” ended with neither a bang or a whimper, but rather the sweet, gurgling, coos of an infant at last at rest — and Hannah’s baby was in there, too. The finale featured the familiar roundelay of Hannah and Marnie playing an unspoken game of whose life sucks most, and who, in turn, is the biggest martyr for tolerating situations that she herself and many of her peers would dismiss as the very things they “can’t even.” Turns out they can — not that it matters, anyway — because they have to.

The finale begins with Hannah being awoken by Marnie who is offering to help Hannah rear her child in upstate New York. Hannah, Marnie and the audience all know Marnie has nothing else going on in her life since both her marriage and music career deteriorated, and Lena Dunham made sure to include this act of desperation to showcase the decline of the friendship. It’s clear that Marnie and Hannah are living on fumes or their earlier Brooklyn days and have no interest in being around each other, let alone raise a child in near isolation. But so goes dead-end relationships of any kind.

Dunham made the interesting decision to not feature the last trimester of Hannah’s pregnancy and resisted including a dramatic delivery and birthing scene. Given the show’s reputation for gratuitous and realistic portrayals of nudity as well as pubic hair and other less pleasant aspects of the human form, an Apatow-esque delivery scene à la “Knocked Up” was expected, but the mature decision was made to omit.

The audience first meets Grover Horvath a few months after his birth, and it’s clear that neither Hannah nor Marnie have been changed too much by the blessed event. If anything, the infant’s presence exacerbates their selfishness and "the First World struggles" they revel in.

Marnie is eager to be the doting friend, the BEST friend to Hannah not because she is genuinely concerned for Hannah but because Marnie enjoys the title and burden that comes with being Hannah’s friend-caretaker-punching bag. Marnie’s motives and martyrdom come straight from her mouth as she explains her competitiveness to be Hannah’s No. 1. It’s not that Marnie believes that Hannah reflects positive values and character traits that healthy relationships offer; rather Marnie enjoys seeing as herself reflected through her relationship with Hannah because things might be bad for Marnie, but she’s still not Hannah and her suffering makes Marnie’s hair appear to shine just a little bit brighter.

Not that Hannah is a postpartum ball of sunshine. She regresses when many mothers might step up, failing at breastfeeding Grover while also expecting Marnie to replace her empty cardboard juice box, post haste. The mounting tension finally reaches its apex when Hannah demands that Marnie quit singing Tracy Chapman’s “Fast Car,” which Marnie takes as Hannah not respecting or appreciating her love of music, naturally. Finally frustrated, Marnie calls Hannah’s mother who flies to help the two adult-children and infant make it through.

Hannah’s mother shines in the episode with a speech about best friendship and marriage, though, it is worth noting that she tried for 30 years to be married to her best friend (Hannah’s gay father) all for nothing. This speech goes along with the theme of declining friendships and the question of “what are we really doing?” that’s become pervasive to the show.

The penultimate episode was deliberately uncomfortable as the Girls and the audience finally confront the elephant that has been lingering: They aren’t friends. Shoshana offers Hannah's negligence in not notifying Shoshana of her pregnancy as justification for excluding Hannah from her engagement party and impending wedding plans.

“Why would she?” is the resounding question.

Whereas female-centered shows like “Broad City,” “Gossip Girl” and “Sex and the City” have gained popularity because they’re contingent on successful friendship dynamics, “Girls” showcases relationships no one should be in. Other shows succeed in developing aspirational relationships, and “Girls” cautions audiences about what social dynamics are in danger of becoming thanks to technology, self-interest, entitlement and other millennial pitfalls.

In that second-to-last episode, Shoshanna suggests the former friends “call it” and walk away before causing further damage, which takes Hannah and Marnie a while to understand. They seem more suited to playing grown-ups than becoming them.

In the finale, however, Hannah ditches her mother, Grover and Marnie to clear her head with a walk and comes across a sullen teenage girl, dressed in Abercrombie & Fitch (of course, the preferred brand for affluent white teens) who has run away. Hannah immediately offers to help her, albeit misguidedly, and because this is Dunham’s Hannah, she offers the teen her jeans and doesn’t take no for an answer. We learn later as the girl and the now pants-less Hannah walk the street that the girl had run away because her mom had wanted her to finish her homework before seeing her boyfriend. Completely demented, I know.

This interaction and the episode’s concern with breast milk versus formula are particularly poignant. Throughout the series Dunham has written her characters to be in situations that they feel like they ought to be in not ones they want to be in: from Marnie’s obsessing with being perfect and Shoshanna's saying she had to stick with her frenemies to Jessa's struggling in relationships and jobs and finally Hannah's declaring that she’s destined to become a famous writer. From the first episode to the last, it’s clear that Hannah doesn’t entirely believe she is the voice of her generation, and the later seasons examine whether she even wants to be.

The characters weigh the pros and cons of breast milk as opposed to formula, but I think the show’s creators are getting at a larger message about formulaic behaviors. The generation Dunham comes from and is primarily writing for (and one that I am part of) has been raised to think of itself as exceptional. Millennials have been conditioned to expect that every moment of every day ought to be worth documenting and circulating to the assumed masses — from their banal brunch photos posted on Instagram to #blessed humblebrags of Coachella weekends — and that we should all be as fabulous as the characters we’ve grown up watching. Funny, the etymology of the word “fabulous” comes from the Latin “fabula” meaning fable or story. “Girls” makes us reconsider the definition not only of friendship but also lives at large. How worth telling are these stories we’re hyping on our feeds every day?

The last episode of “Girls” is aptly titled “Latching.” At first glance it seems that the episode's title comes from Grover’s refusal to latch onto Hannah’s breast to nurse. This raises concerns and questions regarding Hannah’s capability not only as a mother but also as a woman. What kind of woman is she if she can’t get her child to participate in a task that both their bodies were designed to perform?

By the end of the episode it’s clear the title has a larger message regarding the characters and how they’ve latched — how they’ve clung — to one another. The final scenes reveal characters detached from one another in almost every sense. We’re left with the hope that maybe now they’ll be able to move on.