Could Alex Jones possibly be a brilliant artist? 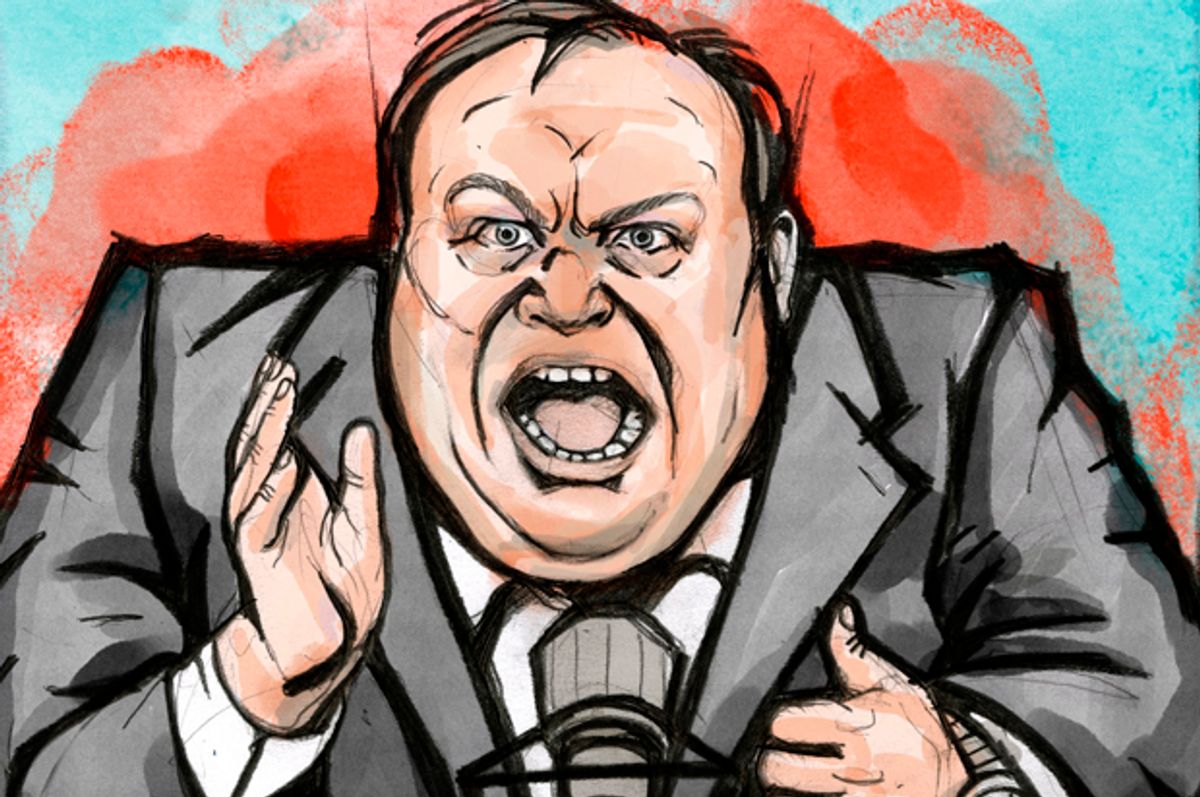 The raving Infowars host Alex Jones has built his fervid following (which includes the president of the United States) by spreading fictions so fantastical — that the Sept. 11th terror attacks, the Sandy Hook elementary school-shooting and the Boston Marathon bombing were all inside jobs; that top Democratic officials, including Hillary Clinton, were involved with a satanic child pornography ring centered around a pizza restaurant in Washington — that he finds himself in the ultimate boy-who-cried-false-flag scenario: He may not have the credibility to claim incredibility.

On Monday in an effort to win sole or joint custody of his three children, Jones’ lawyer defended Jones’ baleful on-air ranting as performance: “He’s playing a character. He is a performance artist,” the lawyer said, likening judging Jones based on what he says on air to judging Jack Nicholson based on his role as the Joker in “Batman.”

The difference, of course, between Jones the radio personality and Nicholson the Joker is one of context and framing. Tim Burton did not construct any illusion that “Batman” was a documentary and that Jack Nicholson had gone mad. Gotham is not a real place. The actors wear gaudy costumes, and it is no secret that their characters originated in comic books. Understanding that Nicholson’s Joker is a fictive invention is within the cognitive abilities of even the most undiscerning Alex Jones listener. Understanding that Jones, who rants about real-world events with the same passion and inattention to facts as many of his conservative counterparts, is not — hence Pizzagate, the election of Donald Trump, the free world’s imminent demise, etc.

Now, a bad analogy does not disqualify the underlying admission. After all, it’s natural for those who are politically informed and not under Jones’ spell to think he is an unserious, shameless provocateur. So if under oath Jones confirms our suspicions, shouldn’t we believe him?

Somehow, that’s a tough ask. There’s a difference between being performative and making art out of performance. The first is an exaggeration for an audience’s benefit. The second suggests a degree of self-referentiality — that the performance is in service of something more than the projection of one’s best self. And while Jones, to all, is clearly performative, there’s no textual or paratextual indication that what he’s doing is not to be taken literally.

Jones barely blinks, let alone winks. His commentary is gospel to many of his listeners, and he seems to like it that way — consequences be damned. If Jones’ diatribes were directed at a more benign subject, like sports, we might think him merely eccentric — a fun heel to hate, like Skip Bayless. But the information Jones disperses has a tangibly pernicious effect, making it feel all the more perverse that the whole thing would be Jones’ attempt at art.

This argument, though, is eerily similar to the one that conservatives have made for generations to limit free speech; it’s been the impetus behind banning books, censoring films and demonizing rappers. Just last week, Geraldo Rivera defended his critique of Kendrick Lamar’s lyrics about police brutality (on the song “Alright”) by reiterating what to most progressives is a profoundly racist and misguided claim — that “hip-hop has done more damage to young African-Americans than racism in recent years.” Rivera said he likes Kendrick Lamar’s music but thinks his message can be destructive. In other words, the effect of the art, even if it’s being misinterpreted like “Catcher in the Rye” was by John Hinckley Jr., is more important than the substance.

It seems suspect that a masterful artist would wait until a custody hearing for his big reveal. But at the risk of misinterpreting what art scholars might look back on in 100 years as an era-defining work, let’s assume that there’s a plan here, that Jones is a maestro of rage, not just an unstable man who exaggerates his worst qualities when he enters the public sphere. Under the most generous interpretation, can Alex Jones’ blusterous bellowing pass for art — or even, great art? Let’s begin oratorically: Jones is the anti-Whitman. He is a barker whose all-caps style of banter is de rigueur in sports and conservative talk radio. Jones’ volume, intensity and brashness may be a level higher than his colleagues', but stylistically he is unexceptional.

Similarly, the picture he is painting is merely darker and incrementally more detached from reality than what is being projected by some of Fox News’ most popular personalities. It is one of America on the brink, at risk of losing the testosterone and precise pigmentation that made the nation mythically great. Jones’ world is just a bit more conspiratorial: To submit to Jones’ reality is to enter into a paranoid dystopia.

But that brings us to where, if we are to consider his work art, it gets its power: the audience. When Jones’ lawyer declared his show performance art, I thought of a virtual-reality installation called “Real Violence” that was unveiled at this year’s Whitney Biennial. The experience, created by Jordan Wolfson, took the form of a 30-second film, in which the viewer must watch (or look away) as a man (Wolfson) beats another man to the precipice of death. That’s it. There’s no context for the violence — just two white men of equal proportions on the street, one wailing on the other.

More interesting than watching the film was watching the reactions of the watchers. People gasped, turned or, desensitized to depictions of violence, they didn’t flinch. The viewers feel as though they are in this world, but really they are just passive onlookers, lacking the power to intervene. The violence was carried out on an animatronic dummy, a human face seamlessly swapped in with a computer. And so the victim is not the dummy but the viewers. How do the viewers react? Are they more predisposed to violence? Do they reconsider how they consume popular portrayals of violence?

In his show, Jones is doing something similar. Sometimes literally and sometimes figuratively, he is using his words for violent means. The purported target is the liberal establishment. But Jones’ listeners are the ones being acted upon. It can feel like his show is a conversation, as all radio can, but it is a one-sided address, bent on riling the listener.

And rile it does — universally. Love Jones or hate him, the reaction to his show is anger and fear. The anger and fear that Jones instills is more powerful than the violence Wolfson portrays because it is given context and direction: The world is crumbling; you’re being wronged; it’s their fault. These are the emotions propelling modern divisions and enabling the suspension of disbelief. They are paralleled and parroted in the White House.

So Jones’s show elicits pathos and makes for effective commentary on contemporary American culture, fine. It still don’t sound like art to these ears, brother.

Well, reader, I hear you. But while it’s tempting to use the know-it-when-you-see-it rule for evaluating what is and isn’t art, if urinals have taught us anything it’s that being a good consumer of art means constantly challenging your precepts and embracing ambiguity. We are in the midst of an era when the bounds of politics and art are becoming harder to decipher, when life imitates fiction as much as vice versa, and when reality is both being assaulted and transcended. Whether Jones is an advanced genius or his lawyer’s claims are an insult to all artists everywhere boils down to whether he’s consciously imaginative or earnestly peddling conspiracies. I’m inclined toward the latter but, you know, of course I would be.