Death in a bottle: Capital punishment in the U.S. has no foreseeable expiration date 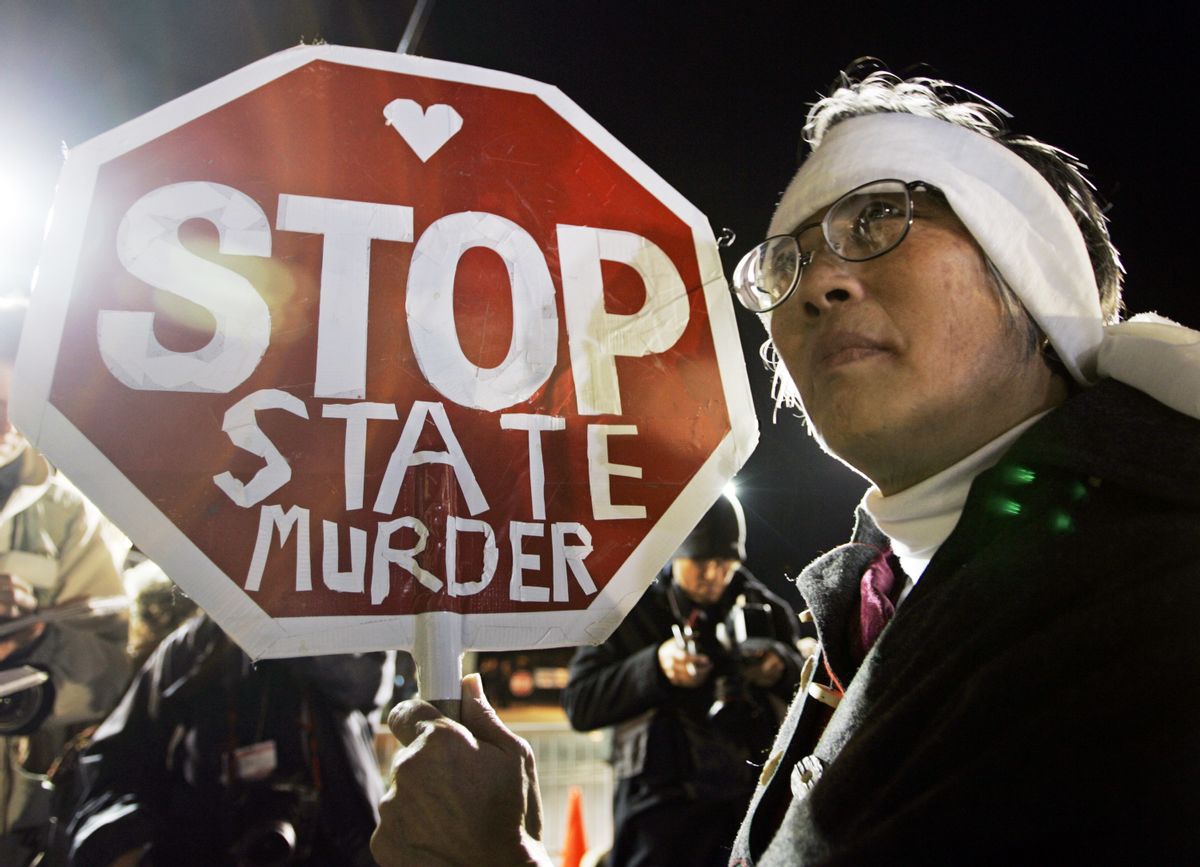 FILE - In this Dec. 12, 2005, file photo, Barbara Chan protests the execution of Stanley "Tookie" Williams, the founder of the Crips gang, outside of San Quentin State Prison in San Quentin, Calif. Williams was executed early Dec. 13. California voters face opposite choices to fix the state's broken death penalty. They can repeal capital punishment in November or reform it so convicted murderers are actually executed. (AP Photo/Eric Risberg, File) (AP)
--

Dueling was outlawed in the Arkansas Territory in 1820, but in present-day Arkansas, courtroom fencing is a blood sport. In the current legal duel over executions, the stakes are lethal — and the consequences may be felt well beyond state lines.

The fight is ostensibly over the use of specific drugs planned for a series of executions scheduled to start this week. That’s not what it’s really about, of course; it’s about stopping those executions. Opponents of capital punishment, while successful in many venues, have failed to convince legislators and judges in several Southern states, including Arkansas, to abandon the death penalty. (Georgia and Texas led the field last year, with nine and seven executions, respectively.)

The limited legal avenues available to death-penalty opponents involve challenges to the methods of execution. The United States Supreme Court has narrowed the definitions of “cruel and unusual punishment” over the years, tightening the rules, but has refused to ban all executions outright.

Which leaves the question of whether specific drugs or methods used in executions fit the permissible criteria. The legal battle in Arkansas is being waged on that narrow issue, but everyone involved knows the deeper issue is life or death.

The unlikely trigger for this chain of events was a pharmaceutical label: eight executions were scheduled almost back-to-back to beat an impending expiration date for the first in Arkansas’ trio of execution drugs, the controversial sedative midazolam. The state has never used the drug before, and it has a checkered history. But the new protocol, and the assembly-line plan at Arkansas’ death-house near Pine Bluff, are rich in irony.

Governor Asa Hutchinson didn’t want to break the law by injecting an expired drug to put a condemned man to sleep. Yes, for real. Hutchinson is, by all accounts, an obedient servant of the law — the kind of man who would never yank a “Do Not Remove” label from a mattress. But being a stickler can have consequences.

Hutchinson’s decision opened the door to challenges not only to midazolam, but also to other drugs planned for the executions. While opponents of midazolam argued against its effectiveness, citing failures to fully sedate inmates in Ohio and Oklahoma executions, the manufacturers of two other crucial drugs went to court to prevent their use in the Arkansas death chamber. They say the state purchased them fraudulently.

Add to those circumstances the reality that public support for the death penalty is waning, even in deep-red Arkansas. The state had so much trouble lining up official witnesses for the planned spate of executions — a minimum requirement of six witnesses for each — that Corrections Director Wendy Kelly had to make a personal pitch to the Little Rock Rotary Club for volunteers. I’m not making this up.

Execution chambers are gruesome places. I have visited a number of them — fortunately when not in use — and the transition from hideous Old Sparky to the sterility of a medical gurney hasn’t robbed them of their grisly menace. The closest I’ve come to the real thing is watching a precision lethal-injection rehearsal at Texas’ Angola Prison, and that chilling experience explains to me why Rotarians are not signing up in droves in Little Rock.

I don’t know much about the candidates for Arkansas’s arsenal of disputed drugs, but the public record for each of them is pretty unsavory. What I do know, for certain — about each and every one of them — is that they lost a crapshoot.

Is the death penalty moral? Put that question aside. You don’t even have to go there: The death penalty is patently arbitrary and unjust. Whether a defendant is to live or die depends not on Lady Justice, but Lady Luck.

For two hundred years, the best legal minds in America have tried to come up with an equitable way to administer the death penalty — and they have failed. “Justice” depends on the vagaries of race (victim and perpetrator), location, and economic status. Add to that the ambition of prosecutors, the competence of defense counsel, the human variables of judges.

Oh, yes, there’s that other pesky possibility: deadly error. DNA results have exonerated 18 condemned murderers over the last two decades. What errors might have occurred before DNA? And what happens when the government accidentally convicts and executes an innocent person? That has happened, too: check out the 1989 Texas execution of a 27-year-old Hispanic named Carlos DeLuna.

Over the next few days, you can expect appeals arguments in state and federal courts. My bet is that the federal appeal to the Eighth Circuit Court of Appeals will be decided in Arkansas’ favor.

Regardless of the decision, there will certainly be an appeal to the US Supreme Court. The odds here are that the Court won’t take the case, but if the dice come down differently and four justices vote to accept it, the decision will be based on the very narrow grounds of this case and these drugs. You can safely place a side bet that the death penalty itself will not be an issue.

The Court has on several occasions in the past come very close to a complete ban on the death penalty as “cruel and unusual” and therefore unconstitutional, but close doesn’t court. These justices are unlikely to break the mold.

The clock is ticking on that drug label: the expiration date is April 30th. If the legal battles continue beyond that date, the condemned men win — but my wager, sadly, is that they will lose.

Either way, this much you can take to the bank: Capital punishment in the United States has no foreseeable expiration date.