Did racism or a longing for authoritarian leadership elect Donald Trump? The right answer is both 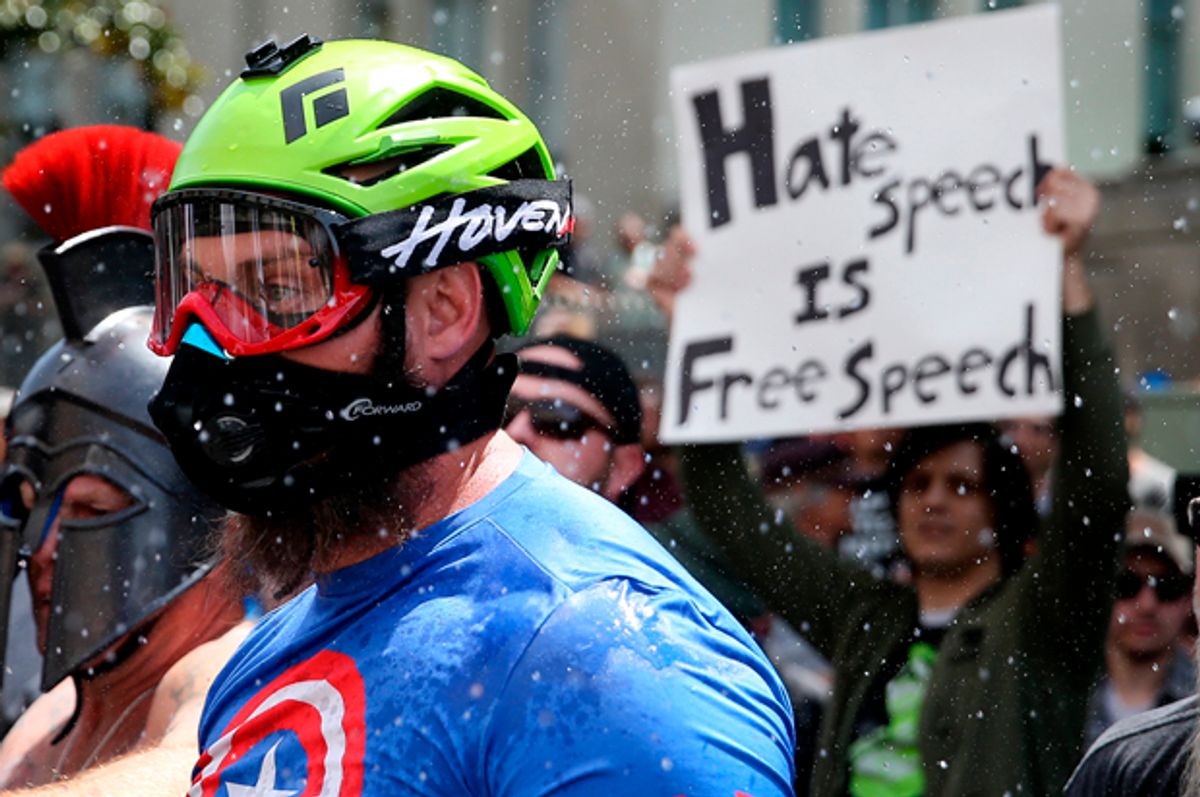 Trump supporters face off with protesters at a "Patriots Day" free speech rally on April 15, 2017 in Berkeley, California (Getty/Elijah Nouvelage)
--

I don't think I've ever experienced an election when after the fact there was so much disagreement about what led to the result. The postmortems are endless this time and we don't seem to be getting any closer to a consensus. It's understandable that people would be intensely curious to figure out why there was such a pronounced and unprecedented split between the winner of the popular vote and the winner of the Electoral College tally. That has been an exceedingly rare occurrence (in the era of popular elections, it happened only twice before 2000) but it is suddenly the norm for Republican presidential victories. Something isn't working quite right in our democracy, and it stands to reason that people would want to find out what it is.

Much of the debate on this issue has been whether the reason for Donald Trump's narrow victory in certain states was because of economic anxiety or racism, xenophobia, sexism and resistance to the changing demographic makeup of the nation. The main question centers on the  whites without a college education who had voted for President Barack Obama twice but opted for Trump in 2016.

Hillary Clinton's campaign has been criticized for her spending too much time talking about "identity politics" and not enough time talking about economics, which made members of the white working class who felt particularly anxious about their futures turn to the man who promised to "bring back jobs." Considering the long-term degradation of the manufacturing base and the recent economic catastrophe associated with the 2007 financial crisis and ensuing Great Recession, it's not unreasonable to make that assumption.

On the other hand, it's impossible to ignore the blatantly racist, xenophobic and sexist appeal of the Trump campaign and dismiss the likelihood that this was central to his win. His campaign was organized around demonizing "the other" from the moment he descended that golden elevator and declared that Mexicans were rapists and criminals. From then on his entire pitch was aimed at foreigners or American "bad dudes," whom he pledged to deport, defeat, demoralize or destroy. His "American carnage" worldview was a white nationalist refrain aimed directly at the ugly American racist id.

Political scientists have been busily crunching numbers and analyzing data and we're finally able to get a sense of the attitudes that shaped the race. Obviously, it's still the early days and there will still  be intense disagreement about how to interpret the results but at least we have something to go by. A new study by John Sides, Michael Tesler and Lynn Vavreck, published in Journal of Democracy  (and soon to become a book) has concluded that voters were not angry about the economy and actually were growing more optimistic. According to the authors' data, throughout the Obama presidency, politics became more racialized, with non-college-educated whites developing less and less favorable attitudes toward African-Americans and moving toward the Republican Party.

Race played a much bigger part in this election, compared with what transpired in Obama's two elections, mainly because Trump played it up as an issue in ways that Sen. John McCain and Gov. Mitt Romney refused to do. The voters who flipped from supporting Obama to backing Trump held strongly negative views on immigration. (Philip Klinkner's analysis from the Los Angeles Times bore out that conclusion as well. The numbers are stark and obvious.) In other words Trump's hard sell on race and ethnicity was what sold this group of non-college-educated whites.

Thomas Wood at the Washington Post's Monkey Cage blog reported that the 2016 American National Election Study has been released, and he offered a similar analysis based on the data provided. He doesn't delve too much into the question of economic anxiety except to note the unusual fact that poorer whites gravitated to Trump while "the degree to which the wealthy disdained the 2016 Republican candidate was without recent historical precedent." That's an interesting way of looking at this question I hadn't heard before. Too bad he doesn't elaborate.

Woods focused on a different question, frankly an odd one: Was it racism or a longing for authoritarian leadership that constituted the greatest appeal for Trump voters? His analysis showed that Trump voters were actually slightly less authoritarian than Republicans in general, but that someone with attitudes that correlate with racism was 20 times more likely to vote for Trump. So he concluded that authoritarianism was not a determining factor.

I think that may be misleading. In American culture, authoritarian attitudes and racism go hand in hand. And while the test designed to scope out authoritarian leanings is probably accurate, it seems to me that it's impossible to separate the two impulses. Institutional racism in America exists at all levels of society, but government authority and criminal justice have always been at its center.

In order to determine someone's predilection for authoritarianism, which is defined in the questionnaire as a fear of chaos and a desire for strong leadership, voters are asked about their child-rearing beliefs. In this test, Trump voters were less likely than Republicans generally have been in the past to say they believe in being "obedient." That may normally be a signifier of an authoritarian personality, but it's also possible that at the moment Trump voters see "obedience" as capitulation to "political correctness," to which they are very much opposed. In any case, Republicans of all stripes, including Trump voters, are strongly authoritarian. The data shows they hold anti-authoritarian views only when it comes to being "well behaved," as they amply demonstrated at Trump's campaign rallies and the Republican National Convention.

The fact of the matter is that Trump's proclamation "I am the law and order candidate" was a direct throwback to President Richard Nixon and Gov. George Wallace's thinly veiled racism of the 1960s. Trump's constant references to inner-city violence and  promises to empower the police, the border patrol and Immigration and Customs Enforcement agents to "get the job done" were part and parcel of his racist appeal. His voters not only agreed with his dark racial views; they also enthusiastically endorsed his promises to do something about it.

By the way, Attorney General Jeff Sessions, Trump's most serious henchman and a living embodiment of racist authoritarianism, is working day and night to make sure that even if the new president flip-flops on everything else, his pledge to crack down on people of color will be honored.