Election day in Georgia: Race to replace Tom Price will be no "easy win" for either party 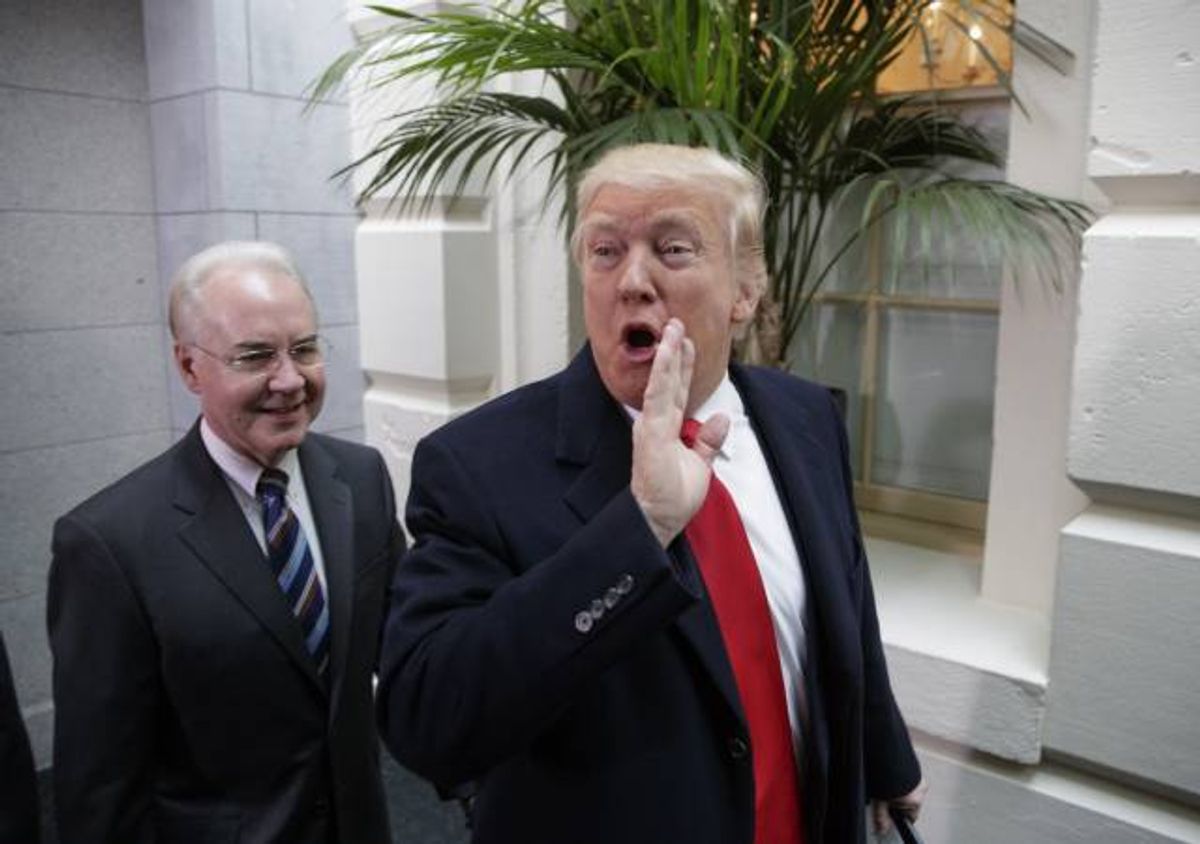 The race to fill the seat left by Health and Human Services Secretary Tom Price in Georgia’s 6th Congressional District is far more competitive than one would expect in this reliably Republican district, with Democrat Jon Ossoff running well ahead of a splintered GOP field. If Ossoff takes more than 50 percent of the vote today, he’ll win the seat outright. Should he come up short, the race will be decided by a June runoff between the top two vote getters.

Losing a special election in the deep red district formerly represented by one of his top Cabinet appointees would be mightily embarrassing to Trump and a grim portent of what lies ahead for the GOP, so the president is lending a hand to the anti-Ossoff get-out-the-vote effort. Trump fired off a few tweets attacking Ossoff as a “super Liberal Democrat” and a “disaster.”

He recorded a robocall warning Georgia Republicans that “if you don't vote tomorrow, Ossoff will raise your taxes, destroy your health care and flood our country with illegal immigrants.” (Ossoff could do none of those things, and even if he could he would need the complicity of top Republican officials, including Trump.) And the president served up a message of strategic hope, encouraging Republicans to vote on Tuesday so that they can score an “easy win” in the June runoff:

That’s an interesting message to come from Trump, given the fact that this district should absolutely be an “easy win” for Republicans: Tom Price won re-election in November by 23 percentage points. But the GOP is now struggling in this heavily suburban district, and it’s largely Trump’s fault.

The special election in Georgia’s 6th Congressional District has become a referendum on Trump. Voters I talked to there were repelled by the president, frustrated by inflexible partisanship and soured on negative campaigning. In that respect, Trump’s last-minute decision to parachute in and start lobbing crude bombs at Ossoff comes with a cost: He might motivate die-hard Republicans to get out and vote, but he might also alienate anti-Trump Republicans and fence-sitters. So as much as Trump might want the “easy win,” his involvement makes victory more difficult for the GOP.

That being said, Trump didn’t really have much of a choice.

If Ossoff wins the seat on Tuesday (which, I hasten to add, is not the outcome predicted by polling), that would represent a sound pantsing of Trump’s party and should scare the hell out of every GOP congressman in a district that is less reliably Republican than Georgia's 6th Congressional District. Trump would rightly incur much of the blame for such a stunning upset, which would make his already faltering agenda that much more difficult to pass.

In the more likely event of the race requiring a runoff, the Republicans will be in a stronger position, but they still won’t be able to coast to the “easy win” envisioned by Trump. Whichever Republican moves on to face Ossoff in June will benefit from a consolidated GOP electorate, but Trump will still be unpopular and still very much at the center of the race. Any Republican running in this district will run into trouble whenever Trump does something Trumpy.

On top of that, the Republican attack strategy has thus far been ludicrous and too divorced from reality to stick: Outside spending groups have tried to portray Ossoff, a moderate Democrat who preaches pragmatism in place of ideological rigidity, as a wild-eyed liberal with (ludicrous) links to Islamic terrorist groups.

The Trump factor combined with the party's propensity to sabotage itself with ridiculous attacks could keep making life difficult for whoever carries the GOP banner into June.

For Democrat Jon Ossoff, time and energy will be the biggest challenges. Tuesday's election absolutely represents his best chance to snatch away this seat; his volunteers and grassroots activist base have poured everything into avoiding a runoff. Asking them to return to work and keep the momentum going for another two months in anticipation of a one-on-one race that favors the Republican won’t be easy. Ossoff would go into that runoff with better odds than a Democrat would normally enjoy, but he’ll still be running in a deep red district and won’t have the advantage of a divided Republican field. And he will almost certainly be put in the position of having to attack his GOP opponent, which would undercut the reputation he’s built up as a positive, inclusive candidate.

Put simply, this special election will be a test of how potent a catalyst for political change the Trump presidency is. Republicans are hoping that the district’s partisan history will carry them over the hump in June, while Democrats are banking on the fresh outrage generated from Trump’s election to help flip a seat that otherwise would have required several more years to turn.

Regardless of what happens, there will be no “easy win” for anyone in Georgia’s 6th Congressional District.