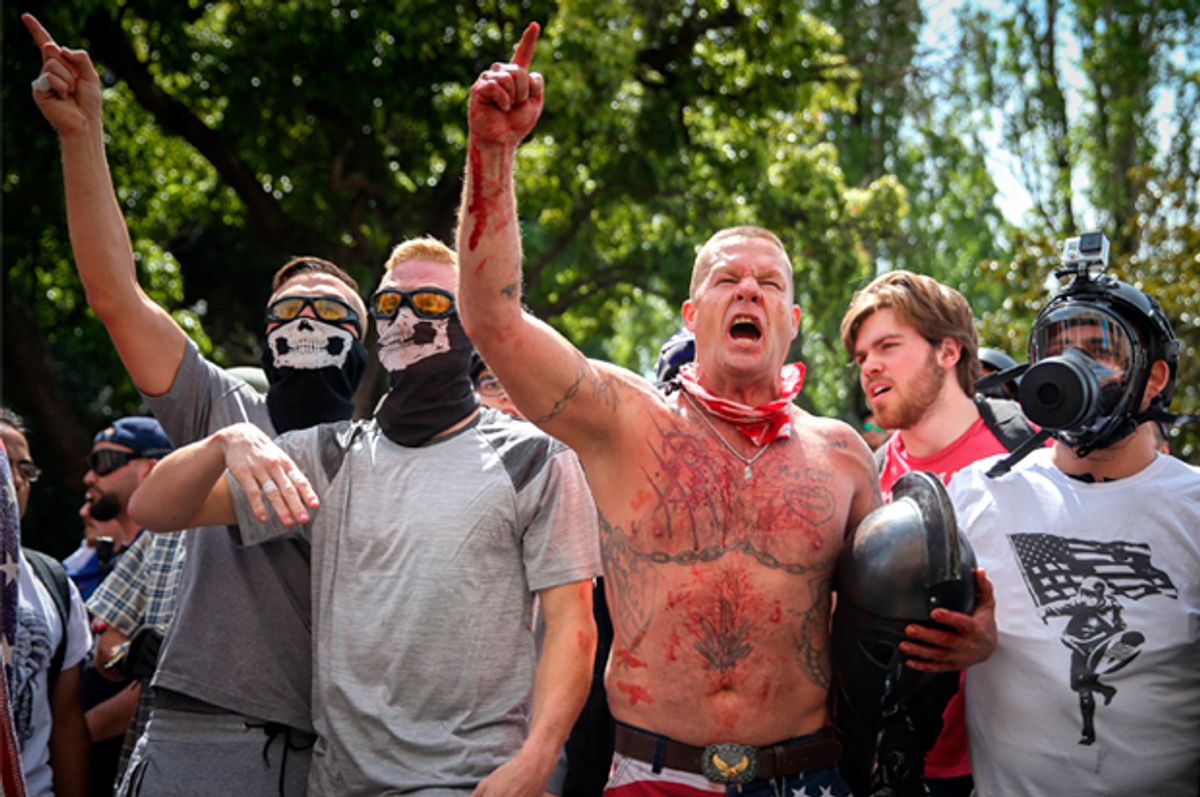 BERKELEY, CA - APRIL 15: Trump supporters face off with protesters at a "Patriots Day" free speech rally on April 15, 2017 in Berkeley, California. More than a dozen people were arrested after fistfights broke out at a park where supporters and opponents of President Trump had gathered. (Photo by Elijah Nouvelage/Getty Images) (Getty Images)
--

Most of the demonstrations held on April 15, which was set aside by progressives for marches to demand that Donald Trump reveal his tax returns, were peaceful. The notable exception was the city of Berkeley, California — often described as the most liberal community in the nation — where things rapidly descended into a street fight between radical right-wingers and more left-leaning counterprotesters.

A group of hard-right extremists came to Berkeley to hold a rally in support of Trump. While they are, of course, claiming that they only resorted to violence in self-defense, it's clear from the social-media organizing done ahead of time that their intention was to start a riot.

David Neiwert of the Southern Poverty Law Center wrote in a blog post:

On social media, the organizers and supporters called it "the Next Battle of Berkeley," a chance to gain revenge for an earlier event on the University of California campus that they believed had infringed on conservatives’ free speech rights: In February, a scheduled appearance by alt-right provocateur Milo Yiannopoulos was shut down by rock-throwing "antifascist" protesters.

One Twitter user also documented the way that alt-right folks were instructing one another in how to smuggle weapons past the police.

They wanted a fight and a fight they got. Eleven people were injured, and six were hospitalized. One white supremacist identified as Nathan Damigo was filmed sucker punching a young woman.

It's tempting to write off this event as something unique to the Berkeley area. The area has a robust "antifa" presence, which is the name given to a small group of youthful anarchist-leftist sorts who tend to reject nonviolent approaches in favor of aggressive confrontation. The white nationalists and fascists knew full well that going to Berkeley meant they would be met with an aggressive response. If they had tried the same stunt in, say, New York, it probably wouldn't have devolved into a violent melee like it did in Berkeley.

But while this particular situation might not have happened anywhere else, now that it has, there's good reason to worry that the violence could spread. By staging this street fight in Berkeley, the alt-right sent a message to its sympathizers across the country, encouraging them to start organizing brownshirt efforts of their very own.

For one thing, while there were 21 arrests at this particular street fight, most of the right-wing fighters — including, apparently, Damigo — walked away scot-free and full of pride about this supposed victory, as Mother Jones reporter Shane Bauer recorded on Twitter.

The far right, jubilant after their victory today in Berkeley. pic.twitter.com/spWNEQ6D5b

Bauer also obtained video footage of his confronting Berkeley police about not doing more and finding that these cops were largely uninterested in a conversation about their responsibility to shut down political violence.

The message that alt-right sympathizers across the country are likely hearing is that this means they can kick the crap out of anti-Trump protesters — even ones who are demonstrating peacefully — and not worry too much about being held accountable by police for their behavior. The fact that Jeff Sessions, Trump's attorney general, has made a showy display out of his utter lack of interest in police accountability only makes this situation more worrisome.

Beyond that, the whole debacle is a marketing coup for wannabe brownshirts. White nationalists and other far-right types have been crowing about their "victory" on social media, with many portraying themselves as tough and manly for their behavior. That message will have resonance for the alt-right crowd, which primarily consists of youngish men who have a lot of anxiety about manliness and an intense desire to prove their manhood. To drive home the gendered nature of this message, one female militant right-winger was theatrically "protected" by a group of men, helping drive home the message to anxious young men that the best way to prove their manhood is to use violence against Trump's political opponents.

As historian Rick Perlstein has pointed out in The Washington Spectator, the amount of online chatter demanding violence against progressives seems to have increased dramatically in the past few months. As has been the case with fascist violence in the past, the hard right excuses its calls for violence by citing "self-defense."

As Perlstein noted, the story that these hard-right forces are telling themselves is that "the left has escalated its resistance to Trump into literal war, so Trump supporters must be prepared to resort to violence to oppose it."

The images from Saturday's melee demonstrate the paper-thin nature of this excuse, especially the video of Damigo punching an unarmed woman. (One of his supporters, conservative commentator Gavin McInnes, defended him by saying the victim's clothing disqualified her as a woman.) But this is the "alternative facts" era, so the laughable transparence of the self-defense excuse hardly matters to those who spout it. All that matters is that they have some pretext, no matter how thin, for their violent urges.

All of which is why there's reason to worry about this violence spreading. This event in Berkeley showed that violence is possible, that most right-wingers who enact it won't face any consequences, and that beating up  progressives is a quick and easy way for young alt-right types to gain praise from their fellows. These fledgling brownshirts may have gotten started by beating up antifas, who are an unsympathetic target. Now that they've tasted blood, there's reason to fear they will feel empowered to spread the violence around.