There's some irony here: The waters of Trump’s Washington are dark and deep 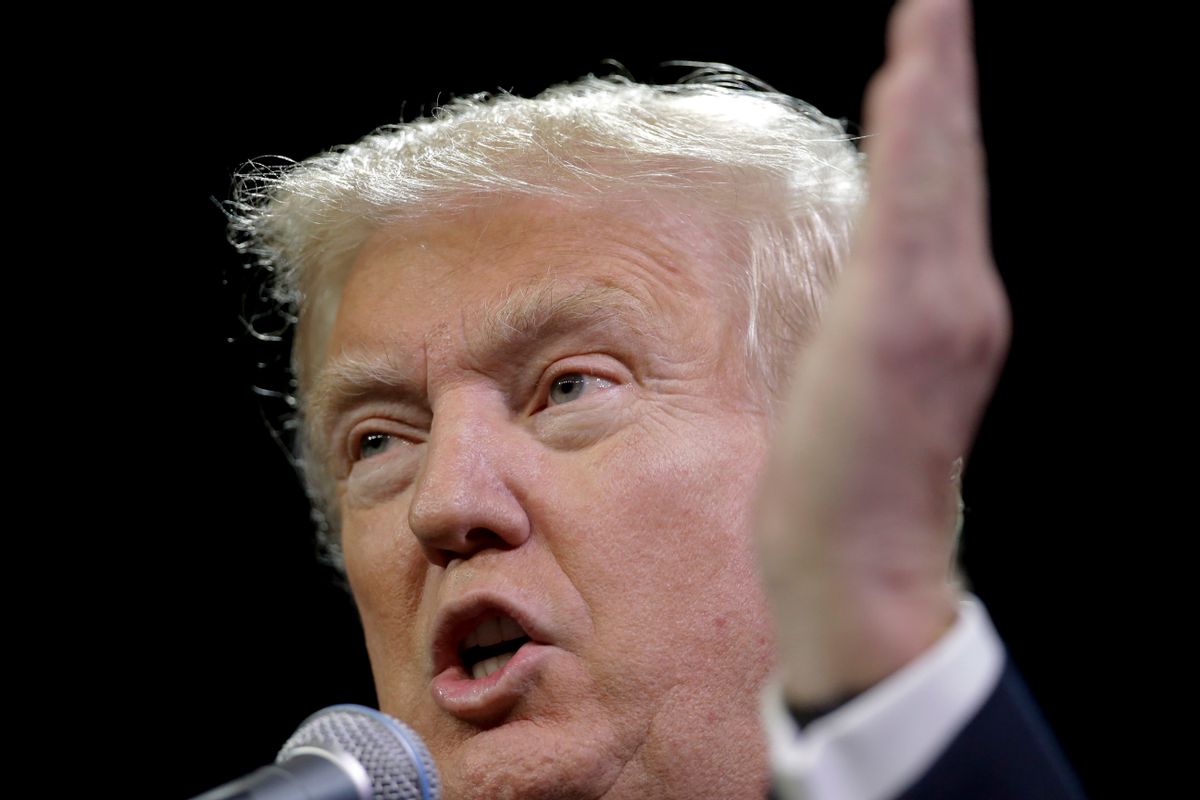 Years ago, I worked for a wealthy television executive in Washington, DC, who had a posh Georgetown townhouse with a courtyard.

In the center of his courtyard was a small fountain, and he became obsessed with getting hold of a certain dye for it that the National Park Service used in fountains and pools at various historic sites around the capital.

The dye turned the water an opaque black, so murky you couldn’t see to the bottom. The park service claimed it was more aesthetically pleasing.

I think you can see this blunt instrument of a metaphor coming: the waters of Washington intentionally made shadowy and dark, secrets hidden. That’s what is happening right now. The Trump White House and its congressional allies are doing their best to obscure the truth, darkening the waters as black as they can to hide what’s really going on.

On Friday, the White House announced that it would no longer make public the logs of who visits the White House. The Obama administration had a policy, with a few exceptions, of keeping such records open and available. But Donald Trump and his gang don’t want you to know with whom they’re doing business.

They say it’s because of “grave national security risks and privacy concerns.” Bull. They might as well say it’s more aesthetically pleasing. The names are hidden for the same reasons Trump’s tax returns and other financial transactions are hidden. And for the same reasons that when he’s signing legislation or executive orders that are unpopular or especially harmful to the public, he does it behind closed doors instead of at those big ceremonies where he signs with a flourish and holds his seismograph-like signature up for all to see.

He hid out this past Thursday when he signed one law that allows states to withhold federal family planning funding from clinics providing abortions and another eliminating a regulation that allowed the expansion of retirement savings accounts. He did the same with the “revised” travel ban, getting rid of federal guidelines for transgender students using school restrooms and the rule that would keep guns from the mentally disabled.

Nor does Trump want you to know what the military is doing until it’s done and the spin is ready to be spun. He claims it’s because he wants to be “unpredictable” — he doesn’t want to tip his hand to the bad guys. It’s more like this: if he goes ahead and drops something big and explosive without revealing the plan, there’s less time for opposition or dissenting points of views. Or, perhaps more probable, he has no real idea what he’s doing, and action, no matter how impulsive or wrong, feels better to him than stopping and thinking things through.

This has always been the Trump way: flashy, ostentatious displays of self-promotion and conspicuous consumption while behind the scenes, shady deals and connections are made. And it continues today as we watch the new administration and its hires trumpet the most minor accomplishments or take credit for those they did not accomplish or shout foul on someone else to distract the rest of us from whatever nefarious doings really are afoot.

The ongoing tale of Trump and Russia proves this well. He and his crew continue to scream that they have been unfairly besmirched, that they are the innocent parties targeted and tailed by an Obama administration committed to manufacturing dirt and leaking false information.

It’s a three-card monte game designed to divert the eye, but for all their false shuffling of the deck, the evidence continues to build. The Guardian reported on April 13 that in the course of communications surveillance, British intelligence and several other European spy agencies discovered contacts between Russia and Trump campaign staff:

“The alleged conversations were picked up by chance as part of routine surveillance of Russian intelligence assets. Over several months, different agencies targeting the same people began to see a pattern of connections that were flagged to intelligence officials in the U.S.”

A source told the Guardian:

“They [the European agencies] were saying: ‘There are contacts going on between people close to Mr. Trump and people we believe are Russian intelligence agents. You should be wary of this.’

“The message was: ‘Watch out. There’s something not right here.’”

On April 6, Eric Lichtblau of The New York Times wrote that thanks in part to the European intercepts, the CIA had told congressional leaders as early as last summer, “that it had information indicating that Russia was working to help elect Donald J. Trump president, a finding that did not emerge publicly until after Mr. Trump’s victory months later, former government officials say.

“The briefings indicate that intelligence officials had evidence of Russia’s intentions to help Mr. Trump much earlier in the presidential campaign than previously thought. The briefings also reveal a critical split last summer between the CIA and counterparts at the FBI, where a number of senior officials continued to believe through last fall that Russia’s cyberattacks were aimed primarily at disrupting America’s political system, and not at getting Mr. Trump elected, according to interviews.”

In addition to prior reporting that the Foreign Intelligence Secrecy Act (FISA) courts had issued secret orders to allow the monitoring of two banks thought to have connections to Russian intelligence, it now turns out that there also was a FISA warrant that gave the go-ahead to monitor Trump campaign foreign policy adviser Carter Page.

“This is the clearest evidence so far that the FBI had reason to believe during the 2016 presidential campaign that a Trump campaign adviser was in touch with Russian agents . . .”

“The government’s application for the surveillance order targeting Page included a lengthy declaration that laid out investigators’ basis for believing that Page was an agent of the Russian government and knowingly engaged in clandestine intelligence activities on behalf of Moscow, officials said.”

When all is said and done, Page may be small potatoes indeed — even one of the Russian agents who first made contact with him said he was an “idiot” — but the FBI and congressional investigations still have a long way to go and much remains unanswered as to how deeply Trump staffers and friends may have been involved assisting in the interference with our election.

There are, too, the many outstanding questions surrounding the apparent financial legerdemain of former Trump campaign chairman Paul Manafort. Millions that he was paid by a Russian oligarch and pro-Putin politicians in Ukraine allegedly moved through banks in Cyprus and elsewhere, as Manafort was busily creating shell companies and taking out mortgages on real estate properties in a way that experts say smells of money laundering.

And finally, there remain all the questions about Donald Trump’s own connections with Russian oligarchs and in turn their ties to the Russian government and organized crime. Josh Marshall of Taking Points Memo has been vigilant in his pursuit of this side of the story and wonders how much the FBI and CIA knew about Trump and his Russia connections long before he ever considered running for president.

“What that means is that we — as reporters and as a concerned public — should probe these relationships on their own terms just as much as the most logical place to hunt looking for the evidence of collusion between the Trump campaign and Moscow.”

There is an irony here. Trump and his cohorts grumble, moan and shriek about the hidden “Deep State” of intelligence agencies and other government and corporate interests they claim have conspired to undermine and defeat the great Trump agenda. But over the years, they themselves have used the very same apparatus of networks and connections to help make fortunes and grease the way to power and influence.

No wonder they’re so desperate to keep the waters of Washington dark and fathomless.