Andrew Sullivan and the "model minority" myth: Columnist unintentionally reminds us that racism is the force that gives conservatives meaning 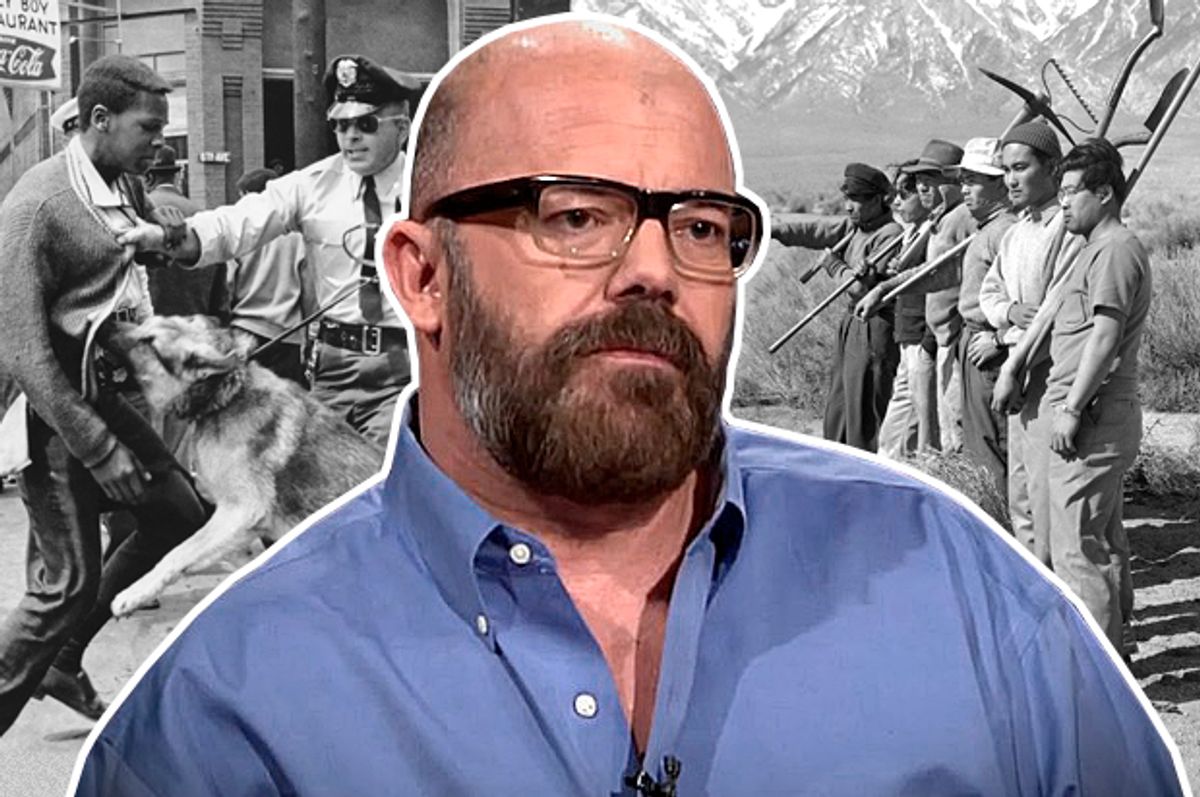 Andrew Sullivan; demonstrators at the Democratic National Convention in Chicago, 1968; Japanese laborers in an internment camp in Manzanar, California in 1942. (AP/HBO/Salon)
--

Last Friday Andrew Sullivan published an essay in New York magazine titled "Why Do Democrats Feel Sorry for Hillary Clinton?" The argument presented therein was not novel, nor was Sullivan's essay particularly insightful. The article is highly useful in some ways, however.

It is a reminder that while it may be fashionable to blame Donald Trump's "white working class" voters for electing a racist incompetent, the bigotry that propelled Trump to the presidency is endemic to the Republican Party and modern conservatism as a whole. This includes its "reasonable," "serious" and supposedly "principled" voices like Sullivan as well.

After meandering from a blistering attack on Clinton to an observation about Dr. David Dao (the passenger assaulted by police on a United Airlines flight last week after he refused to surrender his seat), Sullivan arrives at his money shot.

It’s easy to mock this reductionism, I know, but it reflects something a little deeper. Asian-Americans, like Jews, are indeed a problem for the “social-justice” brigade. I mean, how on earth have both ethnic groups done so well in such a profoundly racist society? How have bigoted white people allowed these minorities to do so well — even to the point of earning more, on average, than whites? Asian-Americans, for example, have been subject to some of the most brutal oppression, racial hatred, and open discrimination over the years. In the late 19th century, as most worked in hard labor, they were subject to lynchings and violence across the American West and laws that prohibited their employment. They were banned from immigrating to the U.S. in 1924. Japanese-American citizens were forced into internment camps during the Second World War, and subjected to hideous, racist propaganda after Pearl Harbor. Yet, today, Asian-Americans are among the most prosperous, well-educated, and successful ethnic groups in America. What gives? It couldn’t possibly be that they maintained solid two-parent family structures, had social networks that looked after one another, placed enormous emphasis on education and hard work, and thereby turned false, negative stereotypes into true, positive ones, could it? It couldn’t be that all whites are not racists or that the American dream still lives?

Andrew Sullivan is engaged in a classic example of attention-seeking behavior in which right-wing pundits make piss-poor, specious and under-theorized claims about race in America. As such, and quite unintentionally, he has provided a much-needed teachable moment.

Sullivan's errors are many. For one thing, his claims provide a textbook example of the way modern racism no longer leverages claims of inherent biological differences regarding intelligence to elevate whites and demean nonwhites (especially black people). Instead, the discourse of modern racism uses arguments about "bad culture" to do the work of white supremacy.

As was common during the post-civil rights era in the United States, Asian-Americans are made into a foil and wedge group by white conservatives for the purpose of negating and ignoring the historical and present-day impact of white racism specifically on black Americans and people of color more generally. Political scientist Claire Jean Kim described the complexities of this political moment in a 2016 editorial in the Los Angeles Times:

This is a pivotal moment in the political history of Asian America. Currently, some Asian American groups are forging alliances with conservative white politicians to defeat state affirmative action bills and spearhead anti-affirmative action lawsuits against elite universities. Others have moved in the opposite direction, denouncing these “Asian-first” moves and calling for Asian-black solidarity in the fight against white supremacy. The Achilles heel of the latter position it that it assumes the unity of nonwhite interests, even though Asian Americans are positioned differently from black people in the U.S. racial order.

The current dynamics of race in America, Kim wrote, challenged Asian-Americans "to develop a political ethos that calls for confronting racial hierarchy and anti-black racism, even when the self-interest of Asian Americans dictates otherwise."

Sullivan's arguments also rely on the discredited "model minority" myth whereby, as demonstrated by scholars such as Ronald Takaki, Frank Wu and others, the diverse experiences and identities of Asian-Americans as a group are collapsed into a political and social fiction that is used to sustain anti-black racism by blunting any claims that white supremacy remains a powerful social force in American life.

The model minority myth is problematic in other ways as well. Primarily, it ignores how members of Asian-American immigrant groups such as Cambodians and Hmong people have struggled with poverty, incarceration and other types of social stigmas and marginalization.

The model minority myth also overlooks how immigrants to the United States often possess social and economic capital that groups such as African-Americans do not possess because the latter have been denied such resources by centuries of institutional white supremacy from the nation's founding through to the present. Kim addressed this point in the same Los Angeles Times essay:

Asian Americans are not, as they are often labeled, a “model minority” whose cultural endowments have allowed them to outstrip other less equipped minorities. However, like whites, they do enjoy a priceless set of structural privileges and immunities, as evidenced by high educational and residential integration and intermarriage rates with whites. They have also been immunized, relatively speaking, from the systemic, routine and often lethal violence exercised by the state against the black community — not just episodes of individual killing, but the institutionalized violence of residential segregation, educational segregation, job discrimination, policing and mass incarceration. This advanced positioning of Asian Americans relative to black people in the U.S. racial order can be traced all the way back to the mid-19th century.

Perhaps most important, social scientists have shown that it is not that Asian-Americans are a "model minority" but that racial animus toward them has diminished over time. Even allowing for that dynamic, one should not overlook that Asians still face racial discrimination in the American labor market.

In his comments about the model minority myth, Sullivan paraphrases almost the exact language used by social scientists to measure modern racism. This would be funny if the implications of Sullivan's claims were otherwise not so serious. He also is either ignorant of or intentionally ignores new research from Demos and the Institute on Assets and Social Policy at Brandeis University that demonstrates that even when blacks and Latinos "follow the rules" to obtain "the American dream" by earning college degrees, working full-time, spending less money and maintaining "solid two-parent family structures," they still do worse in terms of financial wealth compared with white Americans.

Like other conservatives of his ilk, Sullivan's observations about Asian-Americans — and, by implication, African-Americans — are colored by a foundational belief that blacks are aliens in America who are somehow not fit for full citizenship and equal membership in the polity. Moreover, in this narrative black Americans are victims of their own making. Apparently, centuries of white-on-black chattel slavery and then decades of Jim and Jane Crow violence did not exist. The consequences of that plunder and destruction are thus washed away by a fictional, flattened version of American history with Martin Luther King Jr. magically curing all ills, combined with a belief in the inherent goodwill and benign nature of white America.

Ultimately, Sullivan's belief that Asians constitute a "model minority" while black Americans are comparatively inferior should not come as a surprise. In the past, Sullivan has declared his support for the modern-day eugenicist Charles Murray and the debunked claims made in his racist tome "The Bell Curve." Sullivan also believes that human beings constitute separate "races" that by implication can be bred into distinct breeds like dogs.

Donald Trump's racist and neofascist presidential campaign was not entirely reliant on the so-called white working class for victory. He won the votes of every group of white voters except college-educated white women. Trump was able to do this by using white racism, bigotry, authoritarianism and nativism to mobilize his base. In all, Trump would not have been successful if conservatism and racism were not effectively the same thing in post-civil rights era America. Right-wing opinion leaders like Sullivan share and defend those values.

Donald Trump's victory over Hillary Clinton is the civic, social and political wastewater of much more than the white working class. It is the vile output of today's white conservatives as a group. To pretend otherwise is to ignore what really transpired during the 2016 American presidential election and its implications for the present and future health of American democracy.