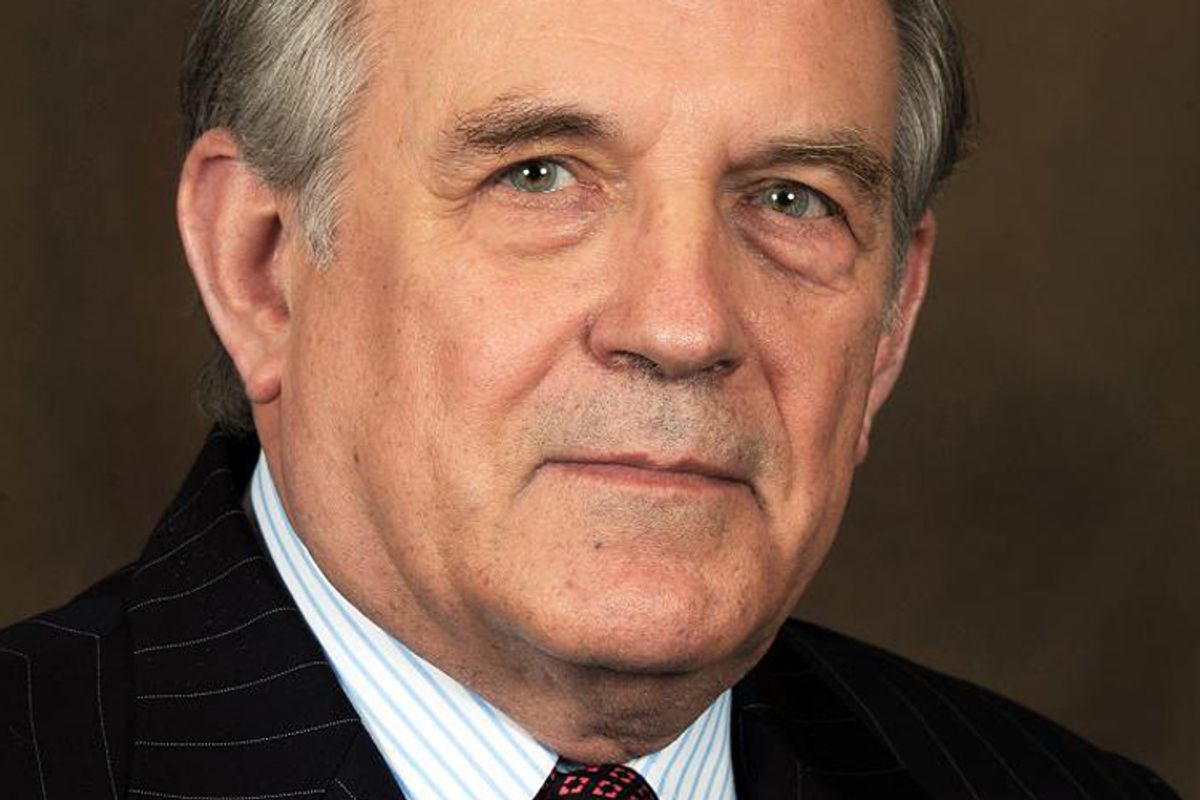 On March 2, eugenicist Charles Murray attempted to give a lecture at Middlebury College in Vermont, with little success. Protesters shouted him down and he was sequestered in another room to answer questions over a livestream. Afterwards, Murray left the campus, but not before protesters blocked his car and injured a professor.

Labeled a white nationalist by the Southern Poverty Law Center, Murray is the author of the 1994 book "The Bell Curve," in which he argues that inequalities of race, gender and income exist because white men are smarter and genetically superior to black people, Latinos, women and the poor. Numerous academics have panned the book for its faulty reasoning and unprovable points.

So why is someone with such fringe ideas invited to speak on college campuses, and who pays for it? It’s unlikely that many university departments would invite such an obviously racist and discredited figure. While co-presenting the Murray talk, the political science department did not invite Murray, nor did it contribute any funding for the event. The Middlebury student chapter of a far-right libertarian think tank, the American Enterprise Institute, asked him to speak, and AEI picked up the tab.

Murray is not the only controversial guest making the college circuit on a think tank’s dime. Another conservative nonprofit, Young America’s Foundation, also establishes student chapters at numerous universities and sends bigoted scholars and lecturers including Ann Coulter, David Horowitz and Ted Nugent to speak at their campus events free of charge. Bankrolling these nonprofits are conservative mega-donors including Charles and David Koch and the DeVos family, who by funding the organizations enable hate speech at institutions of higher education.

In addition, a production company connected to the right-wing billionaire Mercer family facilitated at least one college speaking gig of Milo Yiannopoulos, the former Breitbart News editor known for his racist, sexist, Islamophobic and anti-transgender vitriol.

Murray has been a scholar at AEI since 1990, four years before "The Bell Curve" was published. In 2013, AEI founded its college chapter program, and now there are “executive councils” at more than 80 colleges and universities. At a leadership training program available to executive council members this summer, Murray is teaching a course called “The Building Blocks of Human Flourishing.”

Murray is a frequent invitee of AEI campus groups. He’s now touring the country to talk about his 2012 book on the "state of white America” and gave talks at Duke University, Columbia, NYU, the University of Notre Dame and Villanova University in late March.

Regarding the recent Murray talk at Middlebury, AEI Executive Council member Alexander Khan told The Washington Post, “Our goal was not to create a controversy, but to start a discussion and a dialogue.” Khan did not return requests for comment.

AEI declined to comment for this story, but other reports claim that in sponsoring Murray’s talk, the nonprofit is paying Murray’s speaker fee directly.

AEI gets most of its funding from the foundations of wealthy conservatives and a pass-through group meant to shield the identity of these very donors. Donors Capital Fund, to which conservative mega-donors such as the Koch, DeVos and Bradley families donate, is AEI’s biggest funder at nearly $23 million through 2014, according to ConservativeTransparency.org. The Lynde and Harry Bradley Foundation, a major funder of many conservative groups, is close behind, and foundations run by Charles Koch and Richard and Helen DeVos, the parents of Education Sec. Betsy DeVos, have given more than $1 million each to AEI.

A similarly funded and probably even more conservative nonprofit, Young America’s Foundation, works to direct “public education on the ideas of individual freedom, a strong national defense, free enterprise [and] traditional values and leadership,” according to its most recent publicly available tax form. YAF spent roughly half of its 2015 budget of $17.7 million on conference and lecture programs including “lectures on college campuses” and student chapters.

Just like AEI, YAF has student chapters at colleges and universities around the nation. These “Young Americans for Freedom” chapters, which now exist at numerous institutions of higher learning as well as at high schools, can seek “logistical and financial assistance [from YAF] to host a big-name conservative speaker.”

“Radical feminists, big government bureaucrats, fringe environmentalists, race-baiters, Islamo-fascists, and run of the mill leftists are distraught that [YAF chapters] would even think about promoting conservative ideas,” the website states.

YAF’s roster of more than 90 speakers features several notable bigots including Coulter, Horowitz and Nugent. YAF farms out its speakers at a quick pace, with roughly one event per day during the final three weeks of April.

Some campuses are having quite the year. For example, after a Yiannopoulos event that was canceled because a protest got out of hand, UCBerkeley had noted Islamophobe Horowitz speak on April 12 and will host Coulter on April 27.

“We know who the homicidal maniacs are. They are the ones cheering and dancing right now. We should invade their countries, kill their leaders and convert them to Christianity,” wrote Coulter in the National Review shortly after the 9/11 attacks, referring to allies of the 9/11 terrorists. An alumna of the YAF National Journalism Center’s internship program, she often makes headlines for her outrageous racist and anti-Muslim statements and regularly writes for the white nationalist website VDARE.

YAF is providing “a large portion of the funding to bring Coulter to Berkeley” as well as “logistical support before the event as well as on-the-ground support from experienced staff.”

Horowitz is a former leftist who took a hard-right turn decades ago and has now earned the titles of “anti-immigrant” and “anti-Muslim extremist” from the Southern Poverty Law Center. He runs the David Horowitz Freedom Center, which the SPLC calls “the premier financier of anti-Muslim voices and radical ideologies.”

“Somewhere between 150 million and 750 million Muslims support a holy war against Christians, Jews, and other Muslims who don’t happen to believe in the Quran according to Bin Laden,” Horowitz erroneously claimed in 2007.

Among the particularly bigoted YAF speakers is anti-Muslim extremist Robert Spencer, who runs the hate site Jihad Watch, a project of the David Horowitz Freedom Center. He has said, “[T]raditional Islam itself is not moderate or peaceful. It is the only major world religion with a developed doctrine and tradition of warfare against unbelievers.”

Also on the YAF roster is musician and activist Ted Nugent, whose racist comments know no bounds. In 2014, he called the 44th president “a Chicago communist-raised, communist-educated, communist-nurtured subhuman mongrel [and] ACORN community organizer gangster.”

It’s not just the YAF speakers who have racist and white nationalist leanings. Current YAF president Ron Robinson and board member James B. Taylor ran a now-inactive political action committee called America’s PAC, which donated to the white nationalist Martel Society and consistently contributed to the campaigns of Iowa Republican Rep. Steve King, a white nationalist who has recently cheered far-right European nationalists. Taylor is also former president of the National Policy Institute, which is now run by noted neo-Nazi and “alt-right” leader Richard Spencer.

YAF founded the Conservative Political Action Conference, a major right-wing event that occurs every year. CPAC rescinded its invitation to 2017 keynote speaker Yiannopoulos after videos in which he defends pedophilia surfaced, although his long record of racist, sexist and xenophobic rants was apparently not a problem.

The Richard and Helen DeVos Foundation is by far the biggest donor to YAF, and the Donors Capital Fund and its affiliate, Donors Trust, are also big contributors. The Bradley Foundation, three Koch family foundations and a foundation of the wealthy Mercer family have also given large donations.

An "alt-right" provocateur on campus

When Yiannopoulos, known for his wide-ranging hate speech, spoke at the University of Washington, the College Republicans group that had invited him had to raise money to cover increased security, as Yiannopoulos’ events often attract large protests. The student group raised over $12,000 from a GoFundMe campaign organized by its president, and the event got the green light.

Yiannopoulos charged no speaking fee. A performance agreement obtained by MuckRock shows that Glittering Steel, the production company owned by white nationalist Trump adviser Steve Bannon and connected to the conservative Mercer family, wrote the contract. Yiannopoulos told TNR his speaking fee was $0 “on every stop of the Dangerous Faggot Tour.” He did not directly answer questions about whether a private citizen or company paid his speaking fees behind the scenes and how exactly Glittering Steel was involved.

“Make America Number 1,” the super PAC of billionaire investor Robert Mercer, paid Glittering Steel nearly $1 million last year. Mercer is a part owner of Breitbart News, which Bannon ran for four years before joining the Trump campaign last August. The hedge fund magnate was a big part of Trump’s victory, and his daughter Rebekah was on the Trump transition team.

Yiannopoulos’ Berkeley event was sponsored by the David Horowitz Freedom Center, according to Horowitz’s online magazine, and was set to launch a joint campaign against sanctuary campuses. The Berkeley College Republicans had to provide more than $6,000 for increased security. An “anonymous donor” took care of part of that fee “with two conditions: that he remain anonymous and that the event occur.”

The Freedom Center did not respond to a request for comment.

Free speech or license to discriminate?

In response to fringe, far-right speakers often facing student protests, conservative legislators in many states are pushing "campus free speech" legislation. Two think tanks funded in part by the Koch brothers and Robert Mercer created a model bill, on which many of the state bills are based, that calls for harsh penalties, including expulsion, for students who disrupt guest speaking events.

While enabling hate speech at colleges and universities, billionaire mega-donors are cracking down on students who publicly object to such speech. Meanwhile, the same wealthy conservatives’ family foundations fund ideological higher ed programs that serve their business interests. The Charles Koch Foundation, for example, gave $142 million to hundreds of colleges and universities from 2005 to 2015, largely toward free-market centers, professorships and courses. From these programs, Koch-funded think tanks and political groups recruit their favorite students to join the Kochs’ mass libertarian sociopolitical movement.

Guests speakers on the left

While harder to find, there are liberal organizations with campus affiliates that sponsor guest speakers and other events. The Roosevelt Institute, a progressive, nonpartisan think tank based in Washington, D.C., works to “rethink and reshape everything from local policy to federal legislation, orienting toward a new economic and political system: one built by many for the good of all.” The nonprofit has 130 college and university chapters, which often meet regularly to develop campus, local and sometimes state-level policy proposals.

The institute provides grants and advice to student chapters. Senior program associate Aman Banerji told TNR that “95 percent of the time, students come to us with a thought for an event and then ask for recommendations.” But Banerji couldn’t recall the last time the institute funded a campus speaker, and he wasn’t aware of a chapter inviting anyone particularly controversial to speak.

As the Trump administration advances discriminatory policy, bigoted authors and activists are giving speeches along the college circuit, facilitated by right-wing nonprofits. It’s important for members of the university community to know which organizations are making this possible, and who funds them. It may prove effective for student dissenters to address AEI, YAF and Glittering Steel in their campaigns against racist speakers.