(Un)lucky #45: Impeaching Donald Trump is not an option — yet

The president doing something that is crudely illegal is almost unimaginable 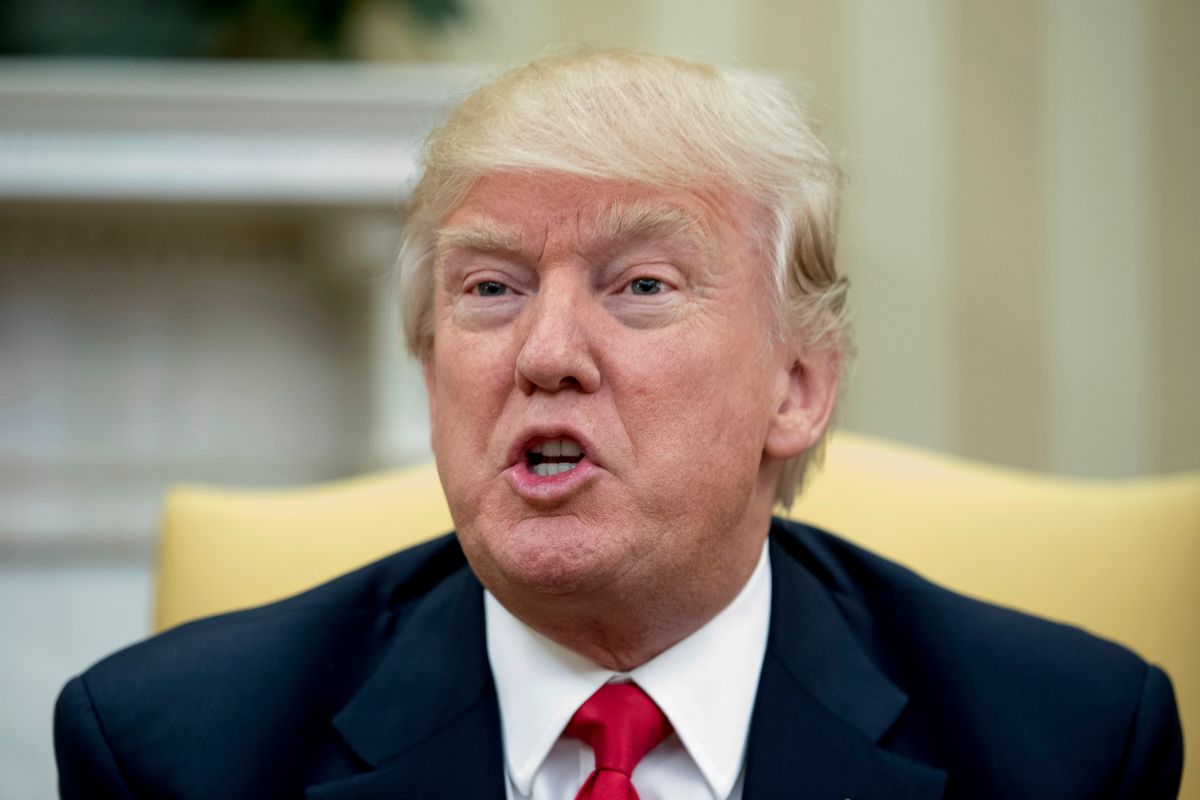 Few subjects have been more hotly debated, scrutinized, and endlessly rehashed, than whether #45 can or will be impeached. A deluge of petitions has been circulated online, and tens of thousands of signatures have been gathered for his removal. The issue of a Trump impeachment roared back on the public and media plate at a recent anti-Trump tax disclosure rally in Washington D.C. where speaker after speaker called for his head by way of impeachment.

The article in the Constitution, the so-called “impeachment clause,” on the surface seems clear enough. A president can be impeached for committing treason, bribery, or the vague, hazy and thoroughly ambiguous, “high crimes and misdemeanors.” The House would initiate the action and then the Senate would have to convict him. That’s never happened.

At this point, there’s little chance that can happen with Trump either. The biggest knock against him is that he has grotesquely violated the Foreign Emoluments Clause by refusing to fully divest himself of his business holdings. This supposedly puts him squarely in conflict of interest and, even more damaging, leaves him wide open to the charge that he is selling political favors to enrich his businesses.

Trump took that allegation off the table when he supposedly plopped his business interests in a hands-off trust administered by family members and a board. Trump as usual was being disingenuous. He can still draw income from the trust with the approval of the board. And what are the odds of the board, in this case, his family saying no to him? The problem, though, in trying to nail Trump for mixing and mingling his business affairs with his government office is proving that he fattened his account by selling favors. There must be proof that Trump got a gift, donation, bribe from, or turned a business deal with a foreign government and, in return, that government got a clearly defined, tangible benefit from the deal with Trump. There’s the huge cry that foreign leaders and governments are spending cash to stay at Trump hotels or rent space in his various other real estate holdings. But that doesn’t mean that Trump has promised them favors, let alone that they have received any political favors from their presence there and the money they spent there. It would take iron-clad evidence that Government X spent say $100,000 on a hotel suite at a Trump hotel or golf resort and then Trump facilitated an exclusive contract from say the Department of Energy to purchase oil, or gas supply equipment from Government X. There would have to be a paper trail to tie Trump to such a deal.

Trump’s team is well-versed on the rules about what public officials can do when it comes to business and government here. They know that eyes are carefully watching him to catch him in any dirty dealing. So, him doing something that is crudely illegal is almost unimaginable. Another possible charge bandied about is that with the lawsuits he’s been hit with, his tax disclosure dodges, and accusations of borderline shady deals, that a case can be made that he perjured himself in his disclosures or, more likely, non-disclosure of his financial dealings.

Trump avoided that potential trap in one big lawsuit, the Trump University scam. He settled before the case moved to trial. Thus, he avoided subjecting himself to having to answer questions in lengthy and potentially damaging depositions. Trump has a phalanx of top gun attorneys around him who know all the ins and outs of depositions and interrogatories and carefully advise him on what is legally permissible to say and what to keep quiet on.

The charge that has drawn the most scrutiny and poses a potential impeachment charge is Trump’s Russia connection. One focus of this is whether Trump colluded with the Russians in their open meddling in the U.S. presidential election to tip the vote to him in three key states. Another is whether his entangled business dealings with the Russians rises to the level of blatant favoritism. Something. of course, could turn up in a deep probe congressional investigation of his supposed tie with the Russians.

The two problems with this is that the likelihood of a GOP congressional committee taking on such a probe is slim to none. The election tampering angle is near impossible to prove. It would take smoking gun proof that Trump directed Putin and his cronies to cook the election books for him.

So, for now we’re back to square one. Lots of talk, speculation and hope that #45 can be tripped up enough to bring a strong case for his removal. But to make that case it’s going to take solid evidence of wrongdoing that meets the high Constitutional bar to oust a president. That’s never happened in the nation’s history. But, there’s four years for something to happen to reach that bar with Trump.

Earl Ofari Hutchinson is an author and political analyst. He is the author of the forthcoming ebook "How the Democrats Can Win in The Trump Era" (Amazon Kindle).