Remember when Trump promised to "take care" of African-Americans? Sessions is now in charge of carrying that out 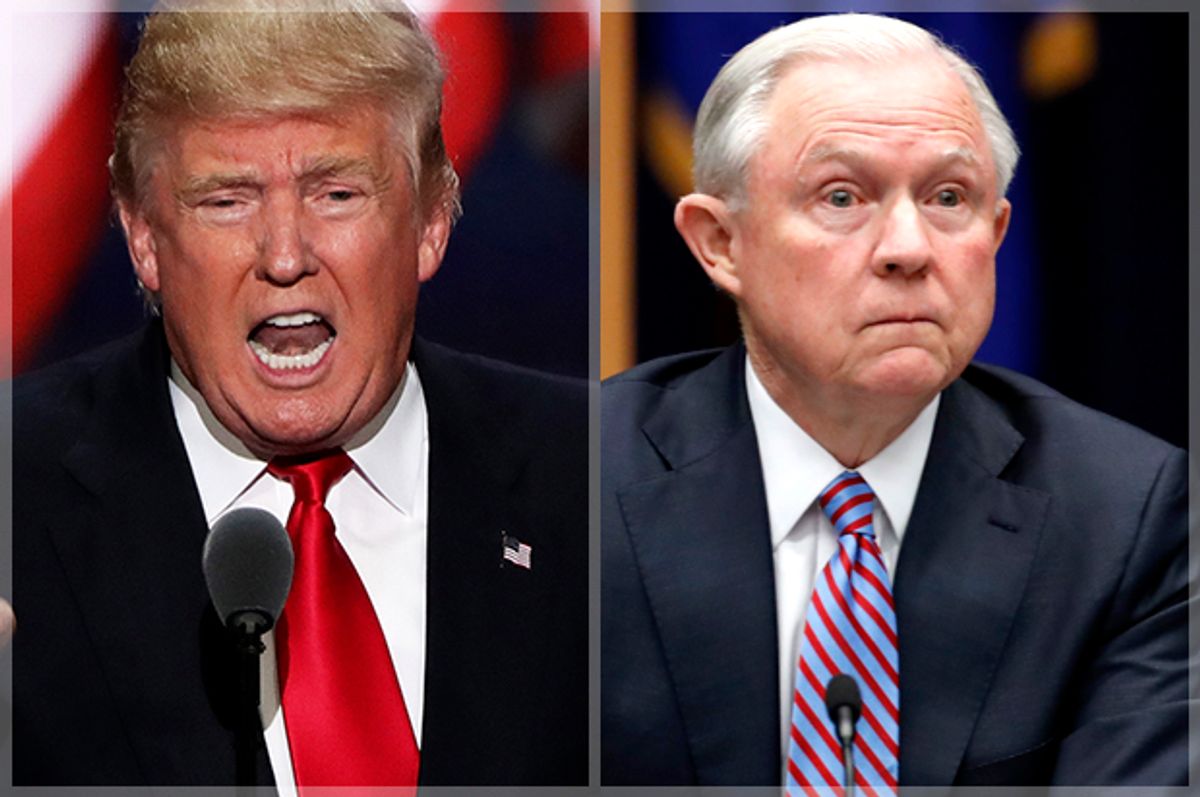 During the 2016 presidential campaign, Donald Trump promised to "take care of our African-American people." Trump also asked black Americans, "What the hell they [had] to lose" by voting for him.

Given his naked embrace of racism and bigotry, there was an undercurrent of menace and malice in Trump's first statement all along. And the answer to the second question was always, "a hell of a lot." Trump's presidency is still in its infancy. But in that short amount of time he has repeatedly demonstrated his hostility toward African-Americans, Latinos, First Nations people and Muslims. Their sense of safety, security, happiness, health and freedom are of no concern to him.

Trump's attorney general, Jefferson Beauregard Sessions III of Alabama, has taken up that crusade with enthusiasm. In an op ed published earlier this week in USA Today, Sessions wrote this:

Violent crime is surging in American cities. To combat this wave of violence and protect our communities, we need proactive policing. Yet in some cities, such policing is diminishing — with predictably dire results . . .

Yet amid this plague of violence, too much focus has been placed on a small number of police who are bad actors rather than on criminals. And too many people believe the solution is to impose consent decrees that discourage the proactive policing that keeps our cities safe. . . .

When proactive policing declines and violent crime rises, minority communities get hit the hardest. We will not sign consent decrees for political expediency that will cost more lives by handcuffing the police instead of the criminals. Every neighborhood needs to be safe and peaceful.

Sessions' claims are based on a combination of half-truths and outright lies. There is no crime wave or "plague of violence" in the United States. In fact, crime is at or near record lows in most places, including President Trump's home city of New York. Sessions also, by implication, is continuing with the disproved claim that there's a war on America's police  (in reality, being a police officer is one of the nation's safest jobs) or are somehow unfairly restrained by being forced to show minimal respect for the civil liberties of the Americans they supposedly "protect and serve."

But images of feral, criminal black people carry great weight in the political imaginations of white voters, especially those who supported Donald Trump. As such the truth is sacrificed for the twin purposes of political expediency and serving America's longtime obsession with "black crime."

There is a small kernel of truth, however, in Sessions' recent article —  one that points to systemic problems of policing and the color line.

For example, the city of Chicago has identified 124 police officers who are responsible for 30 percent of police misconduct lawsuits, out of a total force of 12,000 officers. Instead of dismissing those officers, the city has chosen to pay $34 million in court settlements. This pattern is common in other cities as well. Protecting abusive officers is a political choice. They are kept on the force because the police are agents of social control who target people of color, the poor, the mentally ill and the homeless for harassment and violence. Ultimately, if it were only a few "bad apples" who abused the public, they would be quickly jettisoned for fear of ruining the whole bunch. Alas, it is very hard to ask a person to cut off his (or her) own arm.

Sessions' promise to further unleash America's police on the "inner city" in order to make sure that "every neighborhood" is "safe and peaceful" reflects a larger set of values and political priorities.

The president's inner circle of advisers includes an alarming number of apparent white supremacists and alleged neo-Nazi sympathizers, who view people of color as a threat to white, Christian American identity.

Trump's efforts to destroy the social safety net by repealing the Affordable Care Act and gutting programs that help the poor, children and the elderly will disproportionately impact black and brown Americans. In addition, Trump and Sessions are committed to expanding the "prison-industrial complex" and rolling back the modest efforts made by former President Barack Obama to curb some of its worst abuses, for example, by ending the federal government's use of private prisons.

One should not overlook how unrestrained police power can also do the work of ensuring Republican electoral victories. By targeting nonwhites and other groups who are most likely to vote for the Democratic Party, Trump and his fellow Republicans can use felon disenfranchisement laws and mass incarceration, in combination with gerrymandering and other voter-suppression tactics, to subvert democracy and maintain power.

In many ways, Trump's presidency is an effort to once again make American "white by law." Sessions — a product of the segregated white South who has actively opposed laws that protect the voting rights of African-Americans and other minority groups — shares that commitment.

Writing for The Nation in 1966, James Baldwin made the following observations about police and the color line in America:

Now, what I have said about Harlem is true of Chicago, Detroit, Washington, Boston, Philadelphia, Los Angeles and San Francisco — is true of every Northern city with a large Negro population. And the police are simply the hired enemies of this population. They are present to keep the Negro in his place and to protect white business interests, and they have no other function. They are, moreover — even in a country which makes the very grave error of equating ignorance with simplicity — quite stunningly ignorant; and, since they know that they are hated, they are always afraid. One cannot possibly arrive at a more surefire formula for cruelty.

This is why those pious calls to “respect the law,” always to be heard from prominent citizens each time the ghetto explodes, are so obscene. The law is meant to be my servant and not my master, still less my torturer and my murderer. To respect the law, in the context in which the American Negro finds himself, is simply to surrender his self-respect.

Baldwin continued in the same essay with this personal reflection, one to which many African-Americans and other people of color, from the nation's founding through to the age of Black Lives Matter and now Donald Trump's election, can certainly relate:

I have witnessed and endured the brutality of the police many more times than once — but, of course, I cannot prove it. I cannot prove it because the Police Department investigates itself, quite as though it were answerable only to itself. But it cannot be allowed to be answerable only to itself. It must be made to answer to the community which pays it, and which it is legally sworn to protect, and if American Negroes are not a part of the American community, then all of the American professions are a fraud.

This arrogant autonomy, which is guaranteed the police, not only in New York, by the most powerful forces in American life — otherwise, they would not dare to claim it, would indeed be unable to claim it — creates a situation which is as close to anarchy as it already, visibly, is close to martial law.

Social scientists and pollsters have determined that white racism propelled Donald Trump to the White House. This dynamic has been politely described as a "racist backlash" against Obama specifically and against African-Americans and nonwhites, more generally. A more direct way of describing the outcome of the 2016 presidential election is that millions of white voters wanted to put "uppity" and "arrogant" black people "back in their place" for committing the political equivalent of the Jim Crow-era crime known as "reckless eyeballing" by supporting Obama. It would seem that the psychological wages of whiteness are so intoxicating that they can even motivate many millions of white Republicans and independents to support a neofascist, racist, misogynist and incompetent boor if they believe such a decision will hurt people of color and Muslims.

For every action there is a reaction. In the courts, the streets and at the ballot box, black and brown folks and their allies will push back. Attorney General Jeff Sessions and President Donald Trump, as well as their voters and supporters in Trumplandia, will learn the limits of their power.