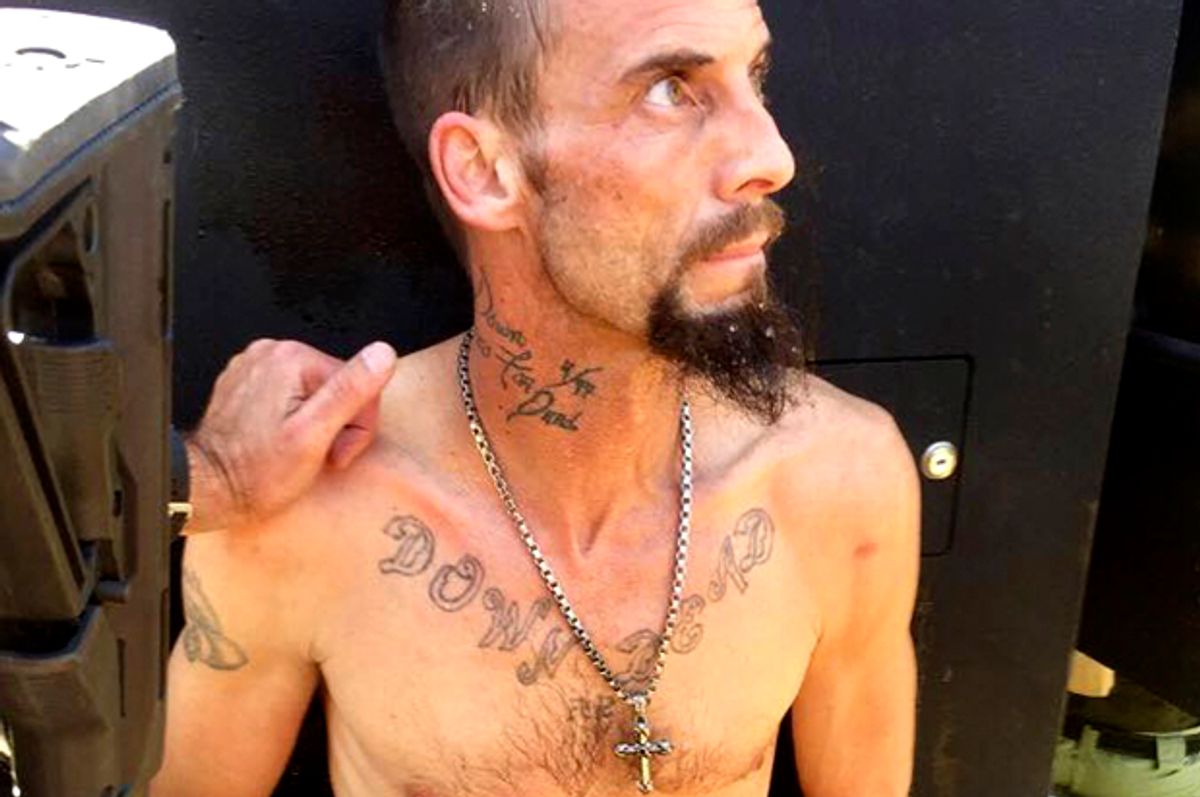 An Oklahoma sheriff’s deputy was fatally shot Tuesday by a suspect who authorities say has a lengthy criminal record and ties to the Aryan Brotherhood, a white supremacist gang operating in and out of the state’s prison system.

Logan County Deputy David Wade, a U.S. Army veteran and father of three, was fatally shot in Mulhall, Oklahoma, as he was attempting to serve an eviction notice about 9 a.m., authorities said.

After arriving at the residence, the 40-year-old deputy was shot by a suspect identified as Nathan Aaron Leforce, 45, of Perry, Oklahoma, whose violent criminal history includes eluding police. The wounded deputy was flown by helicopter to a medical facility in Oklahoma City where he died two hours later from wounds to the head and torso, authorities said.

Authorities said Leforce was not the subject of the eviction and it was unclear why he fired at the deputy. Leforce fled in Wade’s patrol car as the wounded deputy and other officers fired at the fleeing suspect, the Oklahoman reported.

The suspect drove the police vehicle a short distance to a convenience store near Langston, Oklahoma, where he stole another vehicle at gunpoint and drove southwest toward Guthrie, Oklahoma, authorities said.

About five hours later, a large team of officers using a helicopter located the suspect hiding in an outbuilding seven miles southwest of Langston. He was arrested without incident after officers fired gas canisters into the building, authorities said.  He was booked into jail on a charge of first-degree murder.

In 2001, Leforce pleaded no contest to use of a firearm during the commission of a felony and eluding an officer. Those charges came after a police chase, with speeds up to 90 mph, which ended in a cemetery where Leforce’s father was buried, the Oklahoma newspaper reported.

Leforce pointed an AR-15 rifle at the officer who returned fire, blowing out a car tire before the suspect sped away. Police later found the abandoned car and arrested Leforce walking along a road.

In 2007 Leforce pleaded no contest to a charge of obstructing an officer and served a year in jail. Three years later he was charged with check fraud, but the charge was dismissed when he paid restitution, according to public records. He was convicted in 2012 of possession of a stolen vehicle and possession of a stolen credit card.

In 2015, Leforce was charged with kidnapping, child endangerment and domestic abuse, but the charges were dismissed the following year. “The victim told police Leforce had bragged about his associations with the Irish Mob and the Universal Aryan Brotherhood, two gangs active in the Oklahoma state prison system,” the Oklahoman reported.

Logan County Sheriff Damon Devereaux praised the slain deputy for his bravery, pointing out that Wade returned fire at the fleeing suspect even after being shot.

“Deputy Wade lived like a warrior and died like one,” the sheriff said. “He gave his life serving his community, and I don't think you can have a bigger honor than that.”