American royals: The dangerous rise of the Trump monarchy

Thanks to Donald Trump’s dynastic planning, the U.S. will finally beat the British at the royalty glitz game 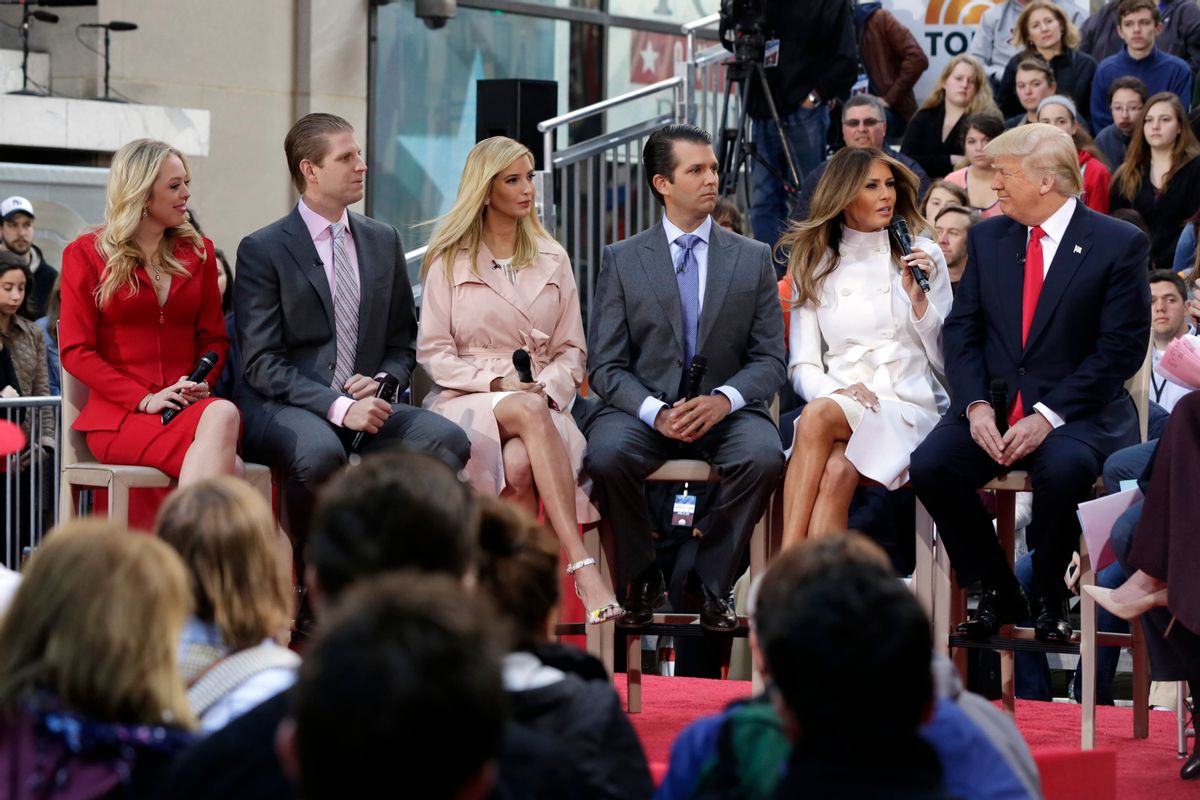 Move over, William and Kate. The Trump family clan has a plan. Americans will no longer cede the fame, glory and global attention of the royal beat to the British.

Being beaten by the British on such productions as “royal weddings” and “royal baby births,” which are an interesting cross between Disney and Hollywood, has long been a matter of great shame for the United States.

Thanks be to Mr. Trump

Proud American nationalists should be grateful to the Trump family clan that it has a business plan to put Kate and William into their proper place.

The family is willing to tolerate the British version as a kind of European sidekick to the main American royal show — also perhaps as a substitute if the real American royals can’t make it on some occasion.

Just don’t mistake the outline of the Trumps’ plan for political trivia or society gossip. In all seriousness, there is a real plan behind it.

In true Trumpian fashion, the main goal of this plan is domestic in nature — to slay the rival putative U.S. political dynasties: the Clintons, the Bushes and the Kennedys. But mainly the Clintons.

This will happen by focusing Trump’s presidency not, as most presidents do, so much on securing their own reelection. Despite the current low poll numbers, Donald Trump has big enough an ego that he pretty much considers this a game.

A truly ambitious person, his goal also is not just to secure the 2024 Republican nomination for his daughter Ivanka, but ensuring that she actually succeeds him in the White House.

That is the leitmotif which guides virtually all of the moves that are undertaken by the Trump White House already at this stage.

Just remember as well that Ivanka was pretty much The Donald’s regular deputy in “The Apprentice” reality TV show. So most Americans are already used to her — including, critically, all of those conservative American men for whom having a woman as President is a hard thing to swallow.

While Trump is indubitably fascinated by the royal succession aspect of it all, what he truly relishes is the prospect that Ivanca Trump will become the first woman president of the United States.

And lest anybody think that that is the end of the family business aspect of the story, think again. Better realize already at this stage that Jared Kushner is already being established as a most suitable and skilled vice president of the United States, to assist his wife Ivanka.

Thus, reckon that 32 years after the first two-for-one deals was announced in American politics, when Bill Clinton offered the services of his wife Hillary for government service in the White House, there now is a new deal of just the same kind – all be it, and that’s very important, with reference to gender roles.

The power of pictures carries a lot of weight inside the American political psyche. And if you looked at the recent meeting between Trump and German Chancellor Angela Merkel, you could see how the succession plan with the two young Trumps was already firmly in place.

Son-in-law Jared sat two seats down from the Donald, while Ivanka set next to Angela Merkel on the other side of the table. Call that a future-oriented Trumpian pincer movement on current world leaders.

Not only did Ivanka way outshine the portly Mrs. Merkel. Jared on Trump’s side also looked much more alert and engaged and less wooden than Mike Pence, the sitting vice president of the United States.

Back to the future

As improbable and cartoonishly silly as the Ivanka as Prez scenario may look to people living in other western countries, one cannot escape the notion that political careers in the United States reverberate a lot around a quasi-aristocratic inheritance principle.

There’s a constant flow of senators, members of the house, governors and the like who effectively inherit their parents’ or husbands’ seats up on their retirement and or death.

Evidently, for many political pros, politics is a family business in the United States. To be sure, some of that simply dates back to the country’s founding days.

But even that “familiar” tradition of the U.S. politics does not quite explain how a country that was founded as an antithesis to a royalist regime hundreds of years later is so deeply fascinated with creating its own sense of royalty.

That strange feature is probably most easily explained by the standard psychological argument of compensation.

Other scholars, such as Eric Nelson, author of “The Royalist Revolution,” have made a more complex argument that the Constitutional framers built a system to give more power to a monarch-like figure than any parliamentary body, based on a then-hazy recollection of the English Civil War and colonial misrule.

Whatever the explanation, it is truly astonishing that in a country that prides itself so much of its diversity, dynamism and so on, but the political process is so needy or so unimaginative that presumed democrats — with a little d — so willingly succumb to the family succession story.

Still, isn’t it kind of agreed to see if the two Trumps will make it to the top? Here is a sobering thought that even ardent Democrats and admirers of Barack Obama must concede:

By the end of the elder Trump’s presidency, whether after four or eight years, both Ivanka and Jared will have considerably more real life business and high-stakes politics experience than the 47-year-old Barack Obama had when he transitioned from junior Senator for Illinois to the White House.

Anybody who thinks the game delineated above is outlandish or at least improbable must reckon with this point: At this stage, it is already far less improbable than Donald Trump of 2015 and even early 2016 securing the Republican nomination for president, never mind getting elected to the White House.

Once a family clan is on the inside of the American political power track, in one way or another, it is bound to stay there.

And if anyone can bring a British-style royal dynasty to the United States, surely it will be the tabloid-veteran family with gilded, palatial estates all over the country.