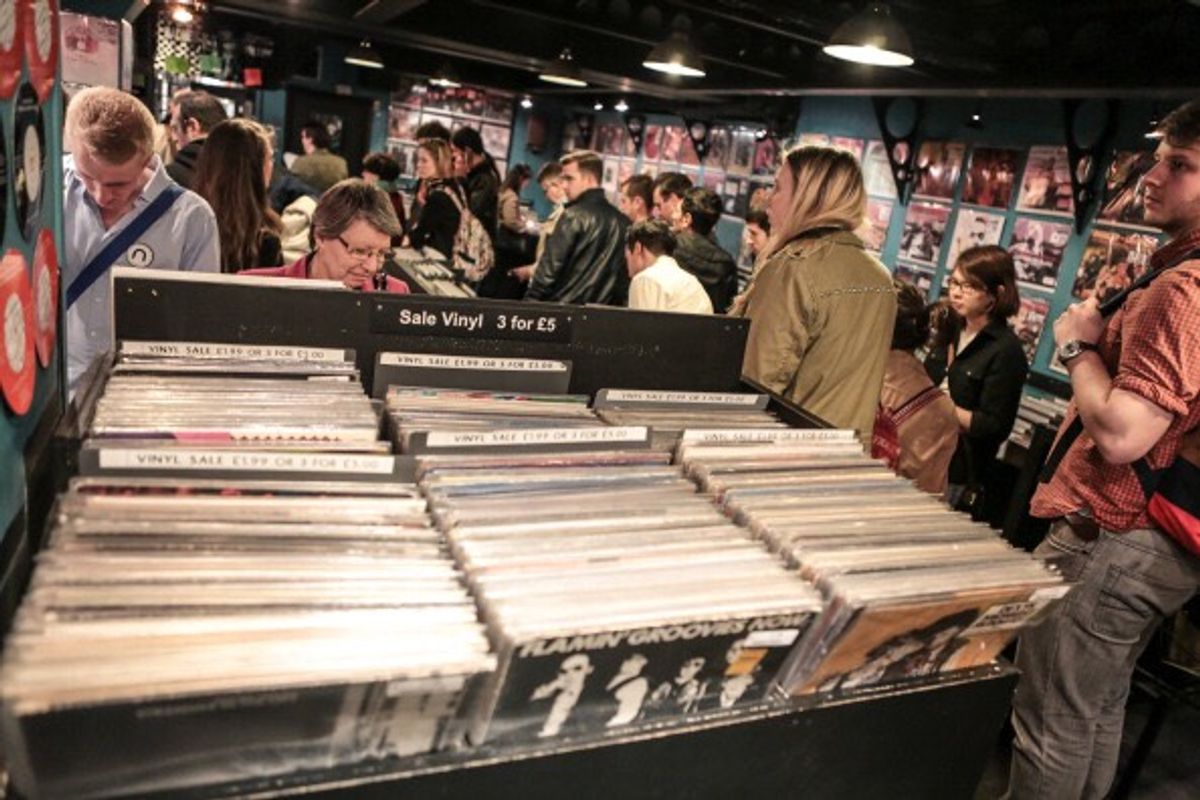 This piece originally appeared on Goldmine

Saturday is the tenth annual Record Store Day (www.recordstoreday.com), the spring celebration of brick-and-mortar music stores, and an especially happy day for those who collect vinyl records. Record Store Day, celebrated at 3,000 independent outlets around the world, has helped fuel the resurgence of vinyl in the U.S., sales of which are at their highest mark since 1990, back before Napster, back before MP3s, back before iTunes.

Record collectors were an endangered species for a while, but they survived, thanks to the availability of used vinyl. In search of mint condition quality, they continued to embrace the tangible and, especially, the collectible. Then the Record Store Day organization came along and pushed the needle, so to speak, by marking the day with the release of limited-edition editions that are uniquely pressed and packaged. (Check out the album Third Man Records made in 2011, below, with pressed silk rose petals inside a clear 7-inch vinyl.) The record stores do the rest with in-store concerts, contests, inventory sales and assorted freebies, all while selling the official Record Store Day releases. Vinyl now transcends generations. Hipsters and teenagers rub elbows in record stores with Gen Xers and Baby Boomers looking for imported versions of “Ten” or “The Band.” And after a lifetime of knocking around record stores, and 10 years worth of Record Store Days, I’ve come to recognize the characters I’ll see in the shops this weekend. Here’s a roundup of the five kinds of record buyers I’ll find myself bumping into on Record Store Day as we all pursue the hottest and hardest-to-find official releases:

The Die-Hard: Bragging rights are everything. He or she wakes up at the crack of dawn (or earlier!) to be the first in line for Record Store Day. Prepared and armed with “the list,” this collector needs to own the most limited-run RSD items in the store. Every year the die-hard hears a rumor about unknown spots that somehow got on Record Store Day’s product shipment list and “have everything,” like antique shops off the beaten track or a bodega out in Jamaica, Queens. It’s like being alerted to the appearance of a Banksy, just not as reliable.

The Crate-digger: This traditionalist was initially reluctant to embrace the Record Store Day phenomenon but the event has grown on them over time, especially after RSD was gracious enough to have given Velvet Underground and Captain Beefheart the special vinyl treatment. But these collectors are there for the markdown sale of used vinyl as well —they’re grisled veterans, after all. They’re used to kneeling down to reach the lower racks and getting their hands dirty, going through the crates that everyone else overlooks. And finding a record store’s newly-acquired collections that have yet to be priced—and on Record Store Day, no less!—is a dream haggle.

Even the fashionably late can find themselves facing a 1-2 hour wait in line, like in this photo of a Record Store Day in 2013 at Red Scroll Records in Wallingford, CT. The red tent, background left, is the anticipated entrance to the event. Photo by Patrick Prince.[/caption]

The Hipster: Ready to stand outside for hours (yes, fashionably late and even in the rain albeit under a handmade, artisinally sustainable umbrella) to get into the most popular record store to buy the exclusive 7-inch by a “regional focus” indie artist only a handful can name. They don’t care about price—only the credit card knows in the end. And maybe a “first-release” Arcade Fire or limited-edition reissue of an early Flaming Lips album, if they happen to see it in the easy-to-access bins … okay, possibly the latest David Bowie picture disc or a box set full of his promos but certainly not anything reissued by Bob Seger (even if it is pressed by Third Man Records).

The Newbie: Accompanying one of the above to the Record Store Day event. It’s nice to experience the event, check out the whole scene, hang out and people watch, hear the band if there’s an in-store performance. Free sodas will be a nice plus and, if lucky, some snacks. What the hell, might pick up the reissued Prince or Elton John, if still available and the price is right. Didn’t buy that Crosley record player at Best Buy for nothing. Not a big record store person but thinks they’re “neat.”

The Flipper: Will be in competition with the die-hard but not to collect or to boast but to sell, on eBay later that day. A total opportunist who might not even be a music lover. Then again, all of those above might have been a flipper at some point, especially if they were only partially employed or in-between jobs at the time. No one will admit to it though, not even under a rough interrogation.

And then there are those who cannot be categorized easily.

“I like all the aspects of Record Store Day,” says my friend Matthew Vinci, a vinyl record collector for more than 40 years and my wingman at lower Manhattan’s In Living Stereo for Record Store Day every year. “I like to see special limited-edition releases. I want to see what used records will go out on sale and if any out-of-print records get re-released. And then to hang out with friends and drink PBRs.”

Right. The ice-cold PBR served up every Record Store Day at In Living Stereo from a giant tub, free until they run out. That’s a Record Store Day freebie that will please almost any one, in any category.