It was supposed to be a huge year for conservatives, but the massive fraud of right-wing media is in full collapse 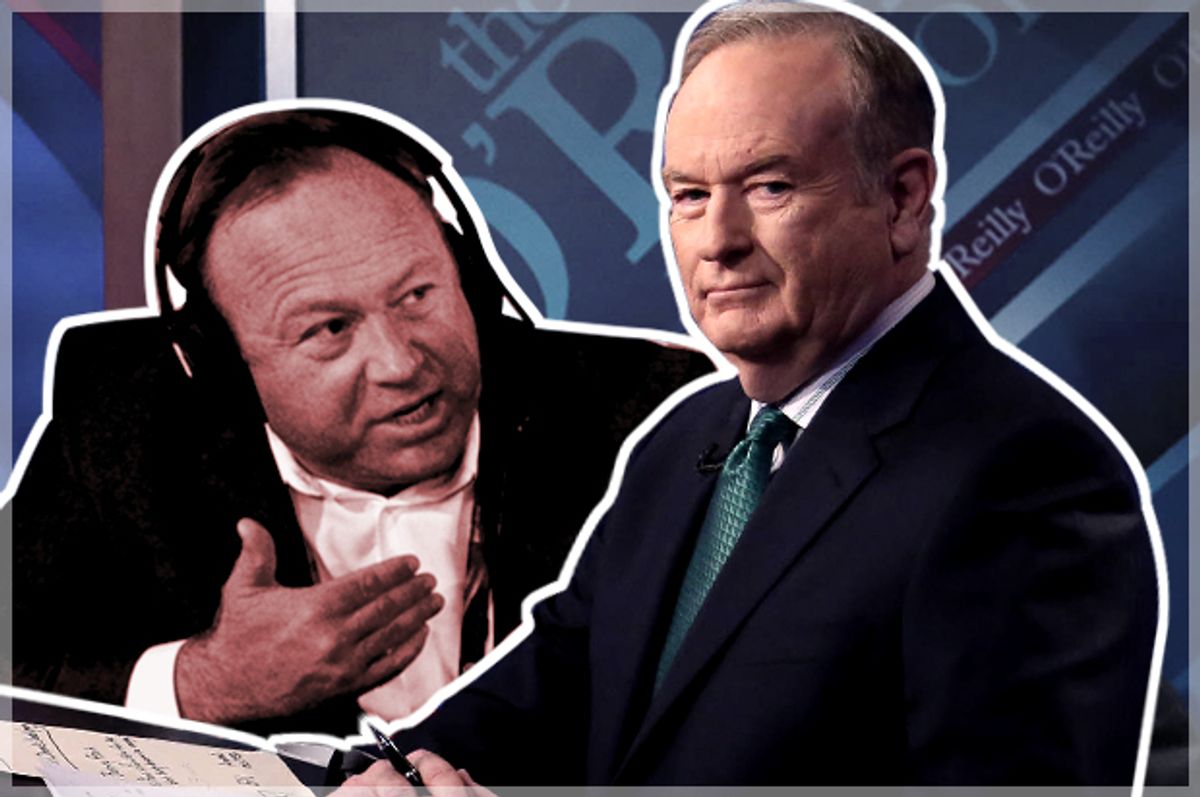 Though their candidate is now in the White House, 2017 has not been a particularly good year for right-wing propagandists, fake news charlatans and the “conservative media industrial complex” at large.

And it is Bill O’Reilly, the most successful right-wing news personality of our time, who has had the worst year yet. As everyone who looks at any form of media has no doubt heard by now, the longtime host of Fox News’ flagship program, “The O’Reilly Factor,” was fired this week after more than two decades at the conservative network. The top-rated host’s downfall began earlier this month, when advertisers started fleeing from his show after it was reported that Fox had paid out settlements totaling $13 million for multiple sexual harassment allegations against O’Reilly.

Thereafter pressure mounted for the network to dismiss O’Reilly, and on Tuesday yet another harassment accusation was filed by an African-American employee, who claims that O’Reilly once leered at her cleavage and called her “hot chocolate,” and that he would regularly stop by her desk and grunt like a “wild boar.”

This bizarre account was apparently the final straw, and Rupert Murdoch and his sons decided to cut ties with the conservative host — who faced charges of domestic violence back in 2015, but weathered calls for his removal. O’Reilly’s departure comes less than a year after Fox News architect Roger Ailes was forced to resign after similar sexual harassment accusations.

While O’Reilly is the most prominent right-wing personality currently in hot water, he is hardly the only one having a bad year. Just one day before the new allegations against O’Reilly surfaced, for example, the troubled personal life of radio host and conspiracy theorist Alex Jones became very public when his attorney Randall Wilhite argued at a custody battle with his ex-wife, Kelly Jones, that he is a “performance artist” who is playing a character, and that judging him by his public persona would be analogous to evaluating Jack Nicholson by watching his portrayal of the Joker in "Batman." On the other hand, Jones’ ex-wife claims that the right-wing conspiracist is a legitimately unstable man who “wants to break Alec Baldwin's neck [and] wants J-Lo to get raped.”

Whether Jones is a method actor or a genuine lunatic — and one suspects he is a bit of both — his lawyer’s claim certainly doesn’t help his “amazing” reputation (to quote no less an authority than Donald Trump) and largely confirms what Jones’ critics have long said: that the conspiracy theorist is a snake-oil salesman exploiting the fears and paranoia of his listeners.

The conservative media’s authenticity problem is not limited to the cartoonish Alex Jones. Indeed, two of the most prominent millennial pundits to emerge on the right during the 2016 election — Tomi Lahren and Milo Yiannopoulos — have also fallen from grace in recent months.

Back in February, the latter lost his six-figure book deal and was forced to resign from Breitbart News after videos surfaced of him seemingly defending having sex with minors. At a press conference announcing his Breitbart resignation, Yiannopoulos admitted to being a “performer” with millions of “fans.” Meanwhile, it was reported this week that Lahren and her employer, Glenn Beck’s media company, The Blaze, are now suing each other after the controversial host was suspended indefinitely last month. The countersuit against Lahren states that the millennial pundit is “uninformed and unprepared to speak” on the issues, and that comments she made last month on "The View" about abortion “were inconsistent with positions she had previously expressed.” In other words, the young host is a self-serving careerist who will say whatever she thinks will advance her promising career in punditry.

So within the first few months of 2017 the biggest Trump devotees to rise to prominence during the 2016 election have been unmasked as publicity-seeking opportunists with dubious political convictions, while the top conservative news host of the past 20 years — who has endlessly preached “family values” to his millions of vieweres — has been exposed as the worst kind of hypocrite.

There is an obvious irony to the fact that the biggest names in right-wing media are imploding and being unveiled as frauds in 2017. This was supposed to be a year of conservative triumph and celebration, with Donald Trump in the White House and Republicans in charge of Congress; instead it has been a year full of downfalls and debacles.

Of course, when you consider the business model of conservative media, none of this is particularly surprising. Right-wing media has become an extremely profitable business venture over the past 25 years — while real journalism has simultaneously become less and less profitable — by combining fear-mongering propaganda and stupefying entertainment. The “conservative media industrial complex” has thus attracted and produced some shameless hucksters and opportunists hoping to profit off the credulity and paranoia of the American people.

Over the past decade, one key contributor to the success of right-wing media has been none other than former President Barack Obama. Indeed, conservative media is a lot like the gun industry in this respect — since Trump won the election last November gun sales have predictably plummeted. Likewise, since Trump moved into the White House right-wingers have found themselves unable to blame everything on Obama, and can no longer tell their credulous audiences that the Kenyan Muslim president is a dictator-in-the-making who plans to take everyone’s guns away (though they have found another bête noire: the "deep state").

Finally, since Trump took office in January, more and more Americans have come to recognize the new president as the fraud that he is. According to a recent Gallup survey, the number of Americans who view Trump as keeping his promises has plunged from 62 percent in February to 46 percent in early April, while his approval rating remains historically low. Trump, it turns out, is an even bigger fraud than Alex Jones, a bigger troll than Milo Yiannopoulos and a bigger hypocrite than Bill O’Reilly -- and not even the Fox News spin zone can conceal that anymore.