Philosopher Henry Giroux on the culture of cruelty and Donald Trump: America is "a democracy on life support — it can’t breathe"

Author of a new book on Trump's rise says we face "something so dark, so real, so evil" with no clear precedent 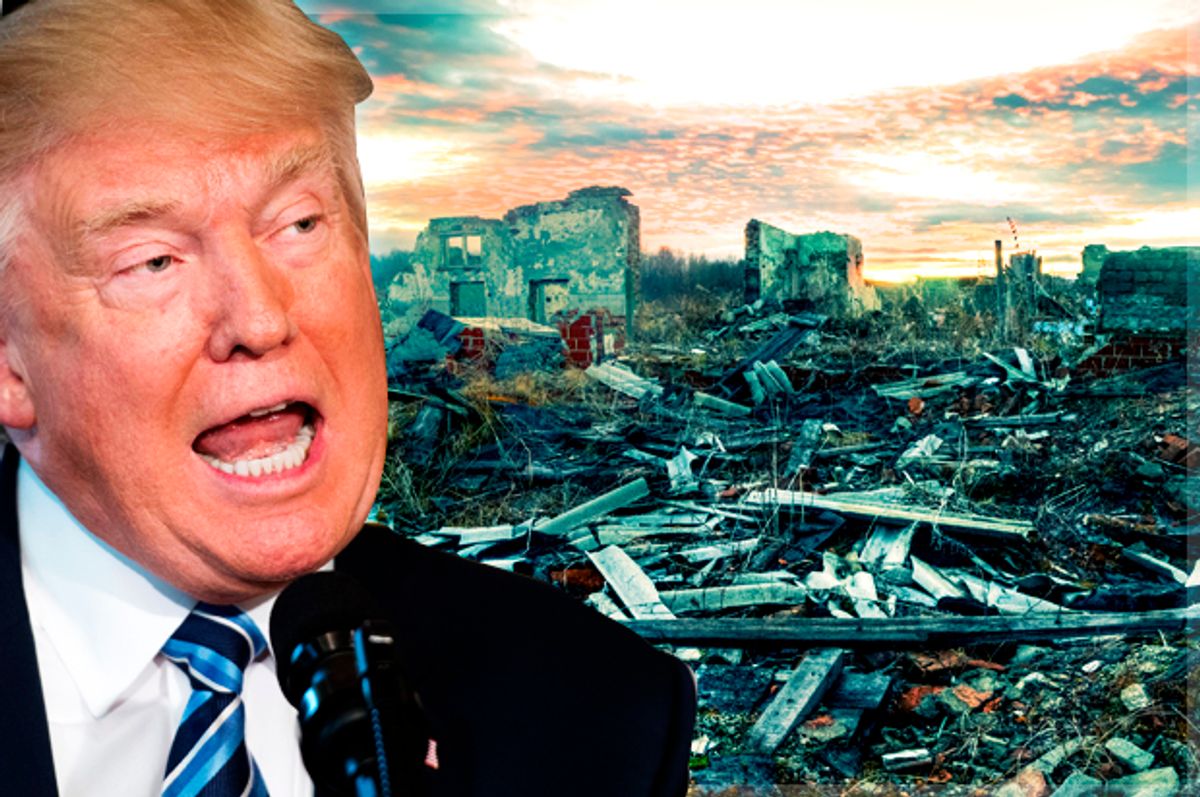 Next week we will mark the 100th day that Donald Trump has been president of the United States. Tens of millions of Americans are still in a state of shock. These 100 days have made them feel like enemy outsiders in their own country.

It was said some years ago that “when fascism comes to America, it will be wrapped in the flag and carrying a cross.” This left the American people unprepared for how neofascism came instead in the form of Donald Trump, a reality TV star, racist, bigot, con artist and professional wrestling aficionado.

How did the United States arrive at this moment?

The American news media betrayed its sacred role as guardians of democracy who inform the public so that they can be responsible citizens who make informed political decisions.

There is a deep crisis of faith and trust in America's political and social institutions. America's political culture is highly polarized and divisive. The Republican Party has embraced a strategy of destroying the existing political rules and norms that make effective governance possible. Today's conservatism is regressive and reactionary. It is an enemy of the commons and of the very idea of government.

Racism, bigotry and nativism compelled Donald Trump's voters to act out in a nihilistic temper tantrum.

Voter demobilization and gerrymandering have subverted democracy and given Republicans a political chokehold on the country.

But none of these forces would have been so powerful if not for a deeper cultural rot and moral weakness in American society. This is what philosopher Henry Giroux has described as the "culture of cruelty." It is the intersection of creeping authoritarianism, militarism, surveillance, violence by the state against its citizens, gangster capitalism and extreme wealth inequality, the assault on the very idea of community and government, widespread loneliness, and social dominance behavior against the Other.

How did the culture of cruelty help to create the political and social circumstances for the election of Donald Trump? Is the United States now a fascist and authoritarian state? What are the issues that could potentially unite the American people to create a more humane society and to resist the cultural and political forces that helped to elect Trump? Are Trump's voters victims? Is American democracy in a state of crisis and permanent decline? What should resistance look like in this moment?

In an effort to answer these questions, I recently spoke with Giroux, a professor of English and cultural studies at McMaster University in Canada. He has written dozens of articles and books, including "America at War with Itself" and the forthcoming "The Public in Peril: Trump and the Menace of American Authoritarianism."

What does it feel like from your point of view, having written so much about the culture of cruelty and authoritarianism, to watch it unfold in the United States in real time?

I’ve been writing about the potential for authoritarianism in the United States for 20 years. This is not a new discourse for me. What has often surprised me is not that it unfolded or the neo-liberal orthodoxy that increasingly made it appear more and more possible. What shocked me was the way the left has refused to really engage this discourse in ways that embrace a comprehensive politics, one that goes beyond the fracturing single-issue movements and begins to understand what the underlying causes of these authoritarian movements have been and what it might mean to address them.

You have to ask yourself, what are the forces at work in the United States around civic culture, around celebrity culture, around the culture of fear, around the stoking of extremism and anger that give rise to a right-wing populism and neo-fascist politics? About a media that creates a culture of illusion, about the longstanding legacy of racism and terror in the United States. I mean, how did that all come together to produce a kind of authoritarian pedagogy that basically isolated people, and made them feel lonely? All of a sudden they find themselves in a community of believers, in which the flight from reality offers them a public sphere in which they can affirm themselves and no longer feel that they’re isolated.

I think the notion of victim is really a bad term because it takes away any pretense for agency and social responsibility.

I try to crystallize it down to, “They voted to hurt people."

The corporate news media has refused to admit this. They want to rehabilitate these folks as having "buyer's remorse." That is absurd. The vast majority of Trump's voters do not regret a damn thing. When you actually go out and look at the data it is clear that Trump is a Republican. Trump supports their agenda and conservatives are happy he is doing their bidding.

We know the anger that most of Trump's voters were supposedly mobilized around was not against the rich. It was not about income inequality. It was about racism. It was about white supremacy. It was about inflicting pain on people. It was about taking away social provisions that even they would benefit from in the name of a false appeal to "individual freedom" and "liberty."

This also gets us to how American liberals and progressives are seemingly unable to craft powerful narratives.

My take is that if they go to the root of the problem, they indict themselves. I think that language becomes for them simply a question of coding that often hides what they’re basically responsible for in terms of the culture of cruelty, barbarism and violence. When you talk about the mass incarceration state, you’re talking about Democrats. If you want to talk about drone strikes and private armies, you’re talking about Democrats. I think people who look to liberals for some sort of salvation in this country are fooling themselves. We need a third party and we need to stop equating capitalism and democracy.

What do you think will happen in America in the future?

I think that what we’re going to discover is that no society can exist when there’s no social fabric to bring people together.

The moral and intellectual civic culture has been so gravely undermined that many people willfully accept the assumption that the only way for them to respond to their private troubles is either by blaming themselves, accepting violence as a first priority or responding favorably to simplistic, irresponsible appeals to demonization and fear. There is no language available to translate private issues into larger systemic problems and the consequences are a failed state and a dysfunctional social order.

That’s a lethal combination. It’ll be interesting to see how people talk about this issue in the future. Hopefully, it will be in ways that enable them to understand how the very notion of agency itself was destroyed, commercialized, commodified and turned into something that was weaponized.

Donald Trump is the crystallization of everything wrong in this country. It is funny to watch the talking heads on television and elsewhere wring their hands. They are trying to argue that Trump won despite being a misogynist, sexual abuser, bigot, racist and white supremacist. I argue that Trump won precisely because he was all of those things.

Donald Trump is the distillation of an attack on democracy that has become crueler, more brutal and more poisonous, more militarized and more violent since the 1970s. To simply view him as eccentric, to view him as some kind of clown who now has tapped into a certain element of the culture, is to really miss the point.

What do you think are three or four specific policy goals or initiatives that could potentially bring together Donald Trump's voters and the majority of Americans?

Bernie Sanders was talking about many of these issues. Why do you think they did not resonate enough to win him the Democratic Party's presidential nomination?

To return to questions of language, the news media has decided to legitimate white supremacists by calling them the "alt-right." I view this as an act of surrender and cowardice.

What do you think resistance should look like against Donald Trump and his regime?

Direct action. We need to talk about an economic strike. You need to bring groups together all over the country to shut it down. The country has got to become ungovernable. There are going to be moments here that even you and I will be shocked by. Trust me: This is coming. You are now living in a terrorist state. This is what the essence of totalitarianism is about. It’s organized around terror, and that’s exactly what this administration is about. I think more and more people will organize and more and more people will realize that this can’t be simply about local demonstrations. I think the only way that the Trump administration can deal with dissent is to attempt to humiliate people -- but even more importantly, under Attorney General Jeff Sessions there will be a systemic expansion of what I call "punishment creep," where every facet of society will be criminalized.

If you were to give a diagnosis for the health of American democracy, what would it be?

It’s a democracy that’s on life support. It can’t breathe. I don’t think we are tipping over into neofascism. I think we’ve tipped over. It’s just a more subtle form of neofascism than anything we’ve seen in the past. The argument that we have to have concentration camps to talk about fascism is nonsense. As any theorist of fascism will tell you, if it comes to America, it will come in different forms.

Are you ever afraid? Do you ever say to yourself, “My God, how did we get here?”

I remember in 1980, watching Ronald Reagan get elected. I remember being around friends. At the time, I was teaching at Boston University. I thought, “Holy shit! This is really a turning point.” But it didn’t hit me existentially the way the Trump election did. I woke up the next day and I felt paralyzed. I felt that we had entered into something so dark, so real, so evil that there was really no precedent for it in terms of its all-encompassing possibilities for death, destruction and violence. I had a hard time functioning for about a week. I think in some ways there’s a residue of that I can’t shake, that now informs my work.