The truth about the campus "free speech wars" 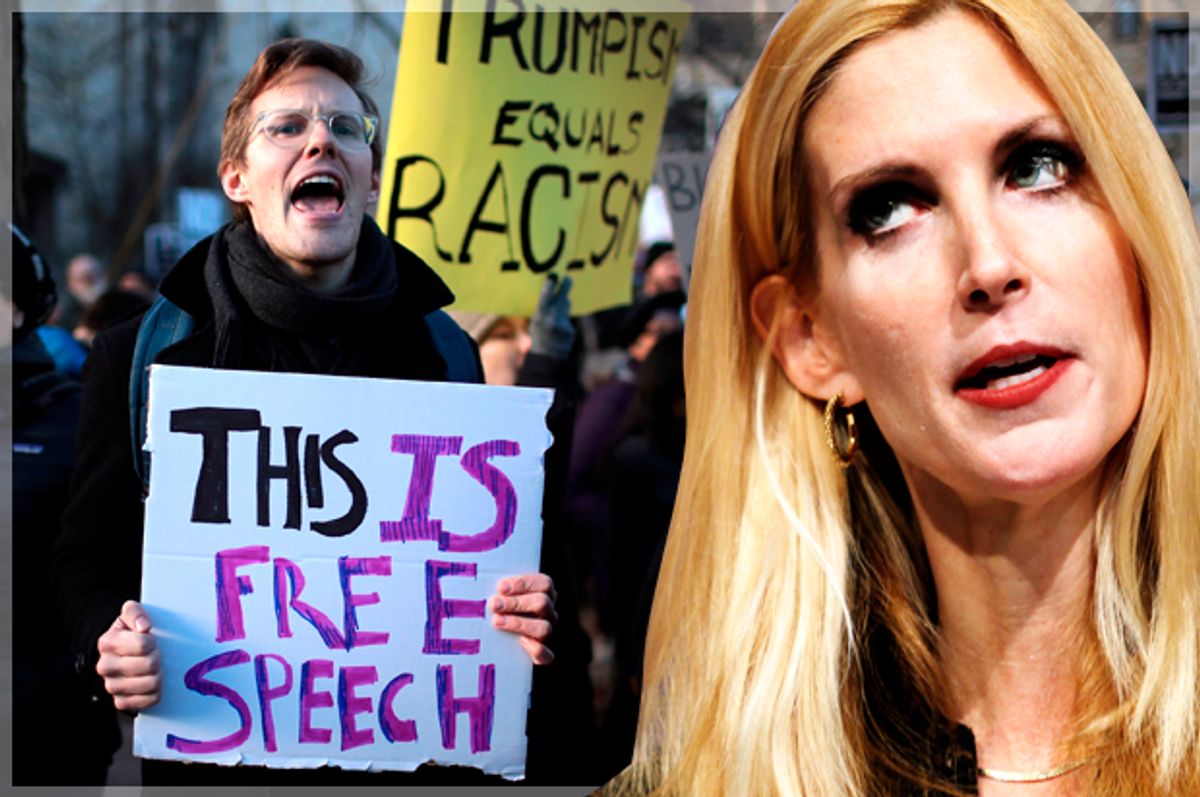 A friend of mine, who is a brilliant songwriter, once gave a guest lecture, with a music performance, in a writing course I taught at the college level. After I dismissed the students, he asked me, “Why were they staring at their crotches the entire time?”

The lap, of course, is where the students feel they can conceal their phones. Instead of assuming that they are scrolling through social media or sending text messages, they would rather have the instructor believe they are sleeping, or as what happened to my friend, staring at their crotches.

My most battering battle in the campus free speech wars is attempting to get the students to speak. Speech, of any kind, would come as a welcome change from the blank stares I’m accustomed to receiving from my students when I ask for reaction to the previous night’s reading assignment. Many right-wing paranoiacs accuse the professorate of attempting to “indoctrinate” the student body according to a Marxist agenda of critical race theory and intersectionality. I would settle for someone raising his hand and saying, “I liked the Hemingway story.”

Far from feeling under threat from students who enforce their increasingly sensitive and hostile ideology on their surroundings, the only complaints I have received are grade protests. “Why did I get a C?” doesn’t quite have the drama or make for compelling “news at 9” flashing banners on television, as a trash can flying through a window in Berkeley, California, or a protest aimed at Ann Coulter, but the grade complaint is typically the only petition a student will file and professor will field. I might actually throw a party to celebrate receiving a complaint against a political statement I made in a lecture because such an objection from a student would imply that the plaintiff was paying attention.

My struggle is not to engineer a worldwide revolt against the interlocking matrix of oppression but to enjoy a simpler achievement — that all the students in my class follow the instructions about how to write their papers.

Recently for a course I taught on personal essays and memoir, I included Barack Obama’s profound book "Dreams from My Father" on the syllabus. In a chapter on his undergraduate years at Occidental and Columbia, he wrote that many white people foolishly believe that black Americans maintain a myopic focus on race: They assume that like machines operating with activist software, African-Americans think, speak and act with the sole motivation of racial politics.

Obama wrote that the truth of black American life, and human nature as it applies to ideology more broadly, is that “Our worries seemed indistinguishable from those of the white kids around us: Surviving classes, finding a well-paying gig after graduation, trying to get laid. I stumbled upon one of the well-kept secrets about black people: that most of us weren’t interested in revolt.”

There is an unbreachable distance between the debates professional commentators initiate and maintain — and the real lives of most Americans. An observation on the gap in comprehension that separates what mass media staffers understand from ordinary citizens' experience might seem banal, but that simple truth almost always evades the countless Twitter feeds, podcasts and websites devoted to running in the opposite direction toward the newest flashing light of invented or exaggerated discord.

Alienation between depiction of life, and the experience of life, troubles nearly every issue — economic struggle, immigration, arguments over the assimilation of Islam into the American mainstream, race relations — and it renders political arguments helplessly circular. Conservative pundits and liberal polemicists run laps around a track they have designed and built, rather than exploring the world outside.

The current hysteria and paranoia over “free speech wars” on college campuses is one of the most absurd and illustrative examples.

There are 4,140 institutions of higher education in the United States and more than 17 million students enrolled in classes at the college level. Bitter disputes over Halloween costumes and cultural appropriation at Yale or arguments over cafeteria sushi at Oberlin are rare and extreme aberrations that actually contradict the reality of the typical day at any university. They are far from emblematic of any larger reality. To evaluate the status of speech on campus according to observations made at a protest transformed into a riot at the University of California, Berkeley is the equivalent of predicting the life expectancy of young Americans by examining the dangers facing soldiers in combat.

The paid pundit suffers under no greater fear or anxiety than the threat of irrelevance. When factual data emerges with the capacity to destroy the pundit’s acumen, it quickly finds itself in the incinerator, discarded and forever ignored.

The cacophony of shrieking over would-be tyrants plotting hostile takeovers of universities from their dorm rooms silenced the revelatory survey from the National Coalition Against Censorship, demonstrating that of 800 university professors, only a handful ever used “trigger warnings” or reported students asking them to use trigger warnings.

The Cooperative Institutional Research Program at UCLA recently polled 141,000 college students and found that only 9 percent of them expressed interest in even attending a campus protest, which aligns with perfect symmetry to a study showing that in the 2014-15 academic year, a mere 6.4 percent of American universities had a student protest take place on campus.

Eighteen-year-old coeds as oppressors in training with diabolical schemes to transform classrooms into Maoist re-education centers make for exciting villains in a melodramatic made-for-TV movie, but the problem with their appearance in newspapers, magazines and internet journals is that they are a species as rare as trigger warnings.

An enterprising journalist might want to devote more time and energy to examining the influence of exorbitant tuition costs, and the backbreaking burden of debt, on student attitudes and campus life. But that would require engagement with the boredom of arithmetic. The lack of enthusiasm and declining interest in liberal arts among students might also make for compelling reading. The only problem with that story is that it demands writers spend time talking to students and faculty and then consider the historically expansive framework of anti-intellectualism in American life, the reduction of education to commercial concerns, and the growing vulgarity of politics and pop culture. It is much easier to observe 12 people out of 17 million behave obnoxiously, and report on the story as if it contained an indispensable insight into the human condition.

The “well-kept secret” Obama discovered is not inaccessible to anyone who invests more than a few seconds of thought on racial sociology, just as even taking a stroll across the quad of the average campus will instruct any visitor that the asinine story about “free speech wars” belongs on the shelf labeled fiction.

More than political bias or even crass fixation on ratings, the most deleterious condition of the pundits is that they have only learned to ride the surfboard. They are surface dwellers. Comprehension of the real stories requires diving equipment.