Donald Trump's Associated Press interview: 10 things we learned (but may have already known) 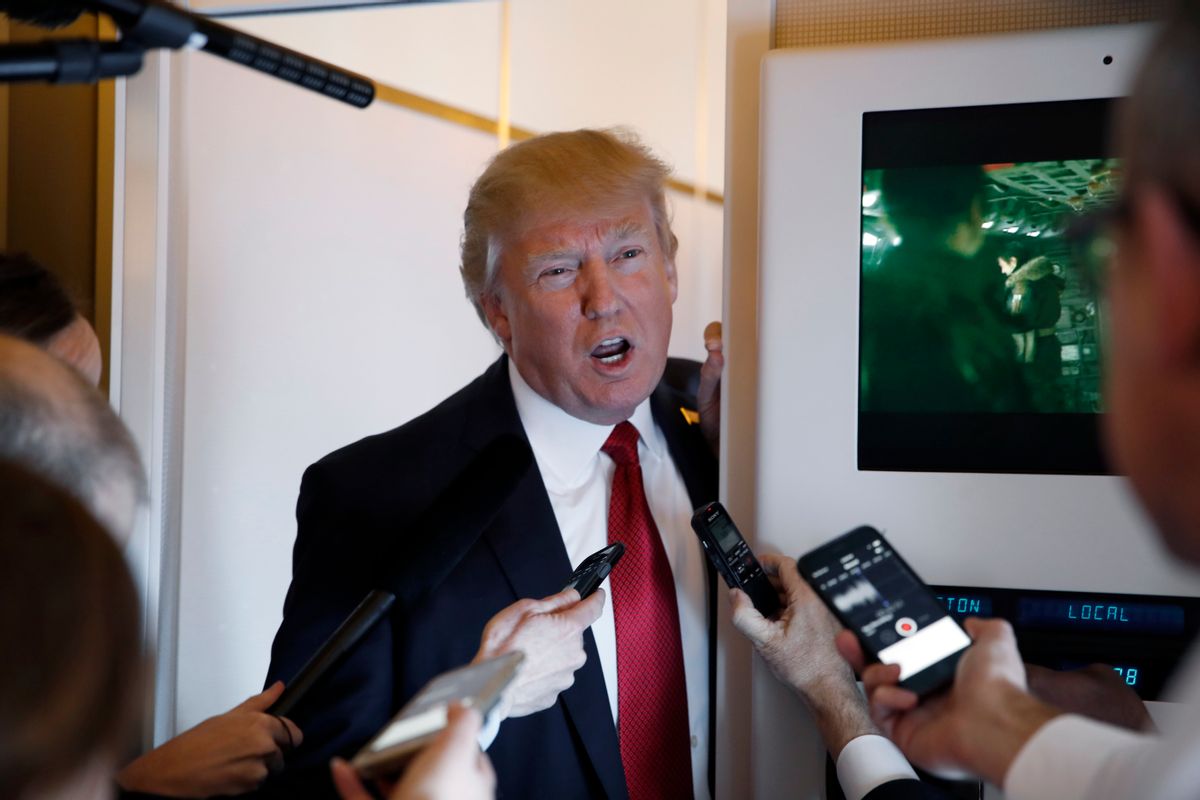 Facebook
Twitter
Reddit
Email
view in app
President Donald Trump gave a sit-down interview to the Associated Press that was published Sunday, and the rough transcript shows that the first 100 days in office really haven't changed him at all. As was the case with the interview he gave to Time magazine, it's full of bluster, denials — and even a couple of lies. Here are 10 takeaways from his interview:
1. He keeps bringing up the 100-day point out of nowhere, but wants to say that he doesn't care about the "artificial" 100-day mark.
Here's what the president had to say about his first 100 days:

And then there was this exchange:

Associated Press: That takes precedent over health care? For next week?

Donald Trump: Yeah, sure. Next week. Because the hundred days is just an artificial barrier. The press keeps talking about the hundred days. But we've done a lot. You have a list of things. I don't have to read it." . . .

AP: So in terms of the 100-day plan that you did put out during the campaign, do you feel, though, that people should hold you accountable to this in terms of judging success?

And here's Trump bringing up something else he's done in his first 100 days.

Look at this, in 100 days, [border crossings are] down to the lowest in 17 years and it's going lower.

2. The president doesn't want to take responsibility for things he said on the campaign trail.
While it's not uncommon for elected officials to backtrack on things they've promised, Trump gives the AP a complete "well, I never did it."

AP: You did put out though, as a candidate, you put out a 100-day plan. Do you feel like you should be held accountable to that plan?

Trump: Somebody, yeah, somebody put out the concept of a 100-day plan. But yeah. Well, I'm mostly there on most items. Go over the items, and I'll talk to you . . .

3. Trump had no idea what it means to actually be president.
Being president means making tough decisions and doing things that are for the greater good, but not for you. Someone is just now getting the memo. As he said:

And the president added:

4. Trump still harbors slights about the media and the election last year and can't stop bringing up how he's being treated.
Parsing this reply requires a long, strange trip into Donald Trump's mindset, which could be a dangerous trip. But he's now president and is still mad about something last year.

You have to win all these states, and then I won Wisconsin and Michigan and all of these other places, but you remember there was no way to, there was no way to 270.
So [Hillary Clinton] had this massive advantage, she spent hundreds of millions of dollars more money than I spent. Hundreds of millions . . . Yeah. Or more, actually because we were $375 she was at $2.2 billion. But whatever. She spent massive amounts of money more and she lost. Solidly lost, because you know it wasn't 270, it was 306.

The question was about his White House team. Here's Trump's reply:

I used to get great press. I get the worst press. I get such dishonest reporting with the media. That's another thing that really has — I've never had anything like it before. It happened during the primaries, and I said, you know, when I won, I said, "Well the one thing good is now I'll get good press." And it got worse. [Unintelligible.] So that was one thing that a little bit of a surprise to me. I thought the press would become better, and it actually, in my opinion, got more nasty.

And then there was this little nugget:

I was on Wolf Blitzer, very fair interview. . .

How does the leader of the free world feel about the democratic institution of a free media?

There have been two modern cases in which the Electoral College vote winner was different from the popular vote winner. In both situations, a Republican won.

Trump lost the popular vote by nearly 3 million people.
6. Donald Trump has no idea about how drugs come into the country.
Here's how Trump explained drug traffic:

If we stop 1 percent of the drugs from coming in — and we'll stop all of it. But if we stop 1 percent of the drugs because we have the wall — they're coming around in certain areas, but if you have a wall, they can't do it because it's a real wall. That's a tremendously good investment, 1 percent. The drugs pouring through on the southern border are unbelievable. We're becoming a drug culture; there's so much. And most of it's coming from the southern border

8. Who is Donald Trump's source for his outrageous claims? We have no idea.
The president had a lot to say about Mexican gangs.

[Mexican gangs have] taken over towns and cities and we are being really brutal with MS-13, and that's what we should be. They are a bad group, and somebody said they are as bad as al-Qaida, which is a hell of a reference.

This claim has to be made-up:

A lot of the people have said that, some people said [his speech to Congress] was the single best speech ever made in that chamber.

9. The president of the United States cares a lot about ratings, as if he were a small-minded reality-TV person or something. He is, at heart, a conservative talk-radio junkie.
Trump honed in on the ratings:

I have all the ratings for all those morning shows. When I go, they go double, triple. Chris Wallace, look back during the Army-Navy football game, I did his show that morning.

"Deface the Nation" is a Mark Levin phrase, so Trump can't take credit for that. As for the World Trade Center remark, well, that's just disturbing, even if it's true.
And then there was this massive exchange with the AP over cable television:

AP: Do you feel that one of the things with cable is there's such real-time reaction with everything you say?

AP: Can you separate that sometimes from that actual decision?

Trump: The one thing —

Trump: OK. The one thing I've learned to do that I never thought I had the ability to do. I don't watch CNN anymore.

AP: You just said you did.

Trump: No, they treat me so badly. No, I just said that. No, I, what'd I say, I stopped watching them. But I don't watch CNN anymore. I don't watch MSNBC. I don't watch it. Now I heard yesterday that MSNBC, you know, they tell me what's going on.

AP: And do you feel like that's, that's because of the office that you now occupy —

AP: That you've made that change?

Trump: I don't know why it is, but I've developed that ability, and it's happened over the last, over the last year.

Trump: I just don't. And that's taken place over the last year. And you know what that is, that's a great, it's a great thing because you leave, you leave for work in the morning you know, you're, you don't watch this total negativity. I never thought I'd be able to do that and for me, it's so easy to do now. Just don't watch.

Trump: Maybe it's because I'm here. I don't know.

10. The president, who is in charge of all the intelligence agencies, deserves a medal for his superpowers of saying things are terrorism.
Trump proclaimed his proclivity at citing terrorism.

By the way, I'm 10-0 for that. I've called every one of them. Every time they said I called it way too early and then it turns out I'm . . . Whatever. Whatever. In the meantime, I'm here and they're not.

Yet Trump was silent about the Feb. 1 Quebec shooting, which the Canadian government called a terrorist attack, but which Sean Spicer used to justify Trump's then-proposed travel ban on seven Muslim-majority countries
Bonus point: Trump is basically endorsing Marine Le Pen for president of France.
Here's the president's exchange with the AP about the French elections (with italics added for emphasis).

Trump: No. Look, everybody is making predictions who is going to win. I am no different than you, you could say the same thing. . . .

AP: I just wonder if you are encouraging, you are the president of the United States, so to say that you worry that it encourages terrorists. . . .

Trump: No, I am no different than — no, I think it discourages terrorists, I think it discourages. I think what we've done on the border discourages it. I think that my stance on having people come in to this country that we have no idea who they are and in certain cases you will have radical Islamic terrorism. I'm not going to have it in this country. I'm not going to let what happened to France and other places happen here. And it's already largely, you know — we have tens — we have hundreds of thousands of people that have been allowed into our country that should not be here. They shouldn't be here. We have people allowed into our country with no documentation whatsoever. They have no documentation and they were allowed under the previous administrations, they were allowed into our country. It's a big mistake.

AP: Just so that I am clear. You are not endorsing her for the office, but you are —

Trump: I am not endorsing her and I didn't mention her name.

AP: Right, I just wanted to make sure I have that clear.