LGBT families under attack: Alabama law would make it legal to stop same-sex couples from adopting 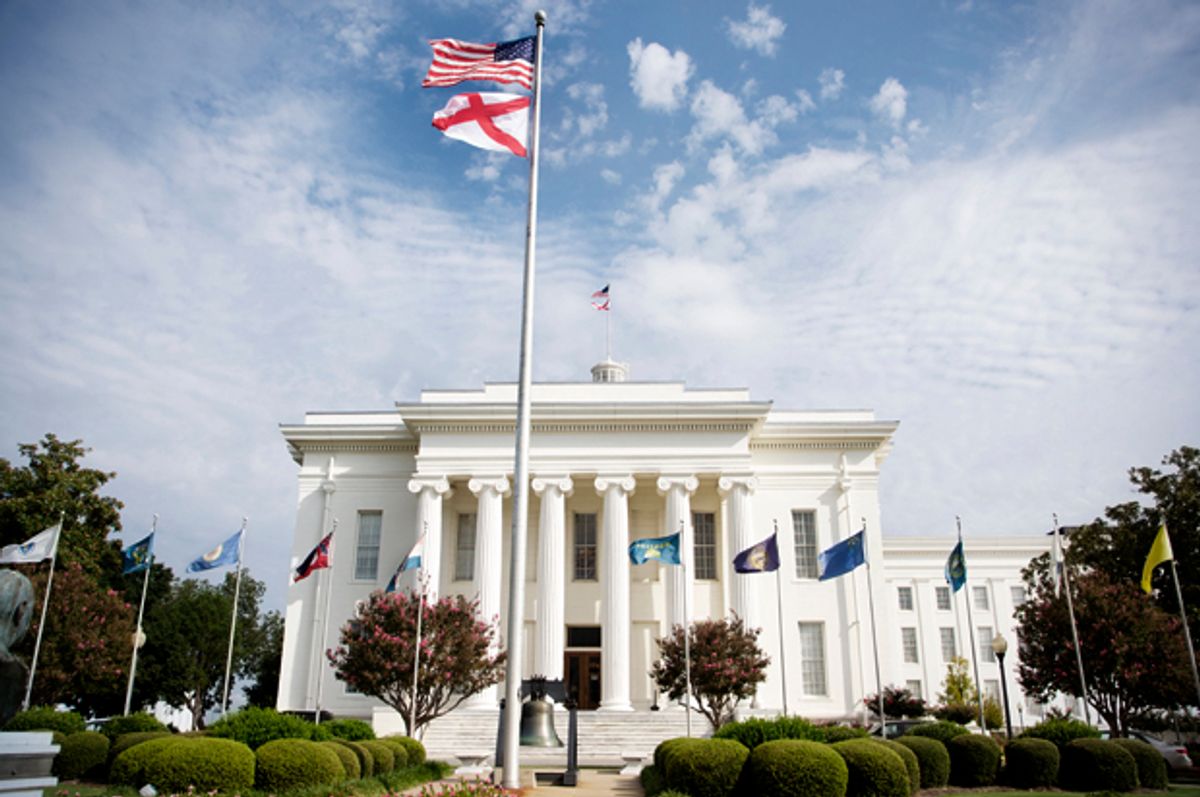 A bill that would allow foster care and adoption agencies to discriminate against same-sex couples could reach the Alabama governor’s desk this week after passing the state’s Senate last Wednesday.

By a tally of 23 to 9, Senators voted along party lines in favor of House Bill 24, also known as the Alabama Child Placing Agency Inclusion Act. Sponsored by two Republicans, Rep. Rich Wingo and Sen. Bill Hightower, the legislation would “prohibit the state from discriminating against child placing agencies on the basis that the provider declines to provide a child placement that conflicts with the religious beliefs of the provider.” Thus, the government would be blocked from revoking the license of an adoption and foster care center if it were to turn down a same-sex couple’s application to become parents.

Wingo, a former linebacker for the Green Bay Packers, has claimed that HB 24 is intended to uphold “religious freedom” in Alabama and is not intended to target the LGBT community.

“This bill is not about prohibiting gay and lesbian couples from adopting or fostering a child,” Wingo told the Alabama Media Group in February. “It’s about protecting and not discriminating against faith-based agencies that, due to their religious beliefs, could have their right to choose where to place a child taken away from them.”

The Republican lawmaker believes that the bill is necessary to prevent faith-based adoption agencies from closing in order to avoid having to place children in same-sex homes. After the Obergefell v. Hodges decision legalized same-sex marriage in 2015, a handful of such centers in Massachusetts, Illinois, California and Washington D.C. shuttered their doors. Wingo's worried that the estimated 30 percent of adoption and foster care centers that are religiously affiliated will be forced to do the same in Alabama.

Eva Kendrick, the Alabama state director for the Human Rights Campaign, said that has not been the case in the two years same-sex marriage has been legal in the state. “That has not happened in Alabama,” Kendrick said, “and it will not happen in Alabama.”

The LGBT community isn’t the only group that would be harmed by HB 24. The HRC, a national advocacy organization for queer and transgender rights, has claimed that numerous groups stand to be targeted by this legislation — including atheists, single parents, interfaith families, divorcees and unmarried couples.

“It’s hard to see this as anything but animus toward LGBT families, but the bill could have a greater effect than that,” said Randall Marshall, the Legal Director for ACLU Alabama. “Agencies could turn away qualified families for countless other reasons that have no relevance to their ability to provide a safe loving home. A Catholic or Jewish agency could turn away Evangelical or Protestant families. A family could be turned away because they don’t attend church regularly.”

HB 24 is merely the latest iteration of a bill that has been introduced numerous times to the General Assembly, and Kendrick said that Alabama LGBT rights groups have been fighting it for years. Last week, these organizations were joined by more than 70 faith leaders who wrote a letter to the Senate urging them not to pass the legislation.

“We know in Alabama that these kinds of possibilities are disastrous for our state,” Kendrick said. “We can’t afford to be the next North Carolina.”

The Alabama Child Placing Agency Inclusion Act, as Kendrick explained, has been condemned by local businesses who have warned that the state could face similar backlash that met HB 2, the anti-LGBT law passed by North Carolina last year. That bill, enacted in March 2016, led to a widespread boycott that cost the state an estimated $87.7 million in a six-month period. That law was overturned following a controversial repeal, but had it remained in place, the Associated Press projected that it would lead to $3.76 billion in economic losses over the next 12 years.

North Carolina has a strong, versatile economy that could withstand backlash, and the state will recover. Alabama might not, if this bill becomes law. The Yellowhammer State is one of the poorest in the nation, with the sixth-lowest GDP per capita. More than 900,000 people in Alabama live in poverty, amounting to 19.2 percent of the state population.

“Alabama has a massive need to boost our economy,” Kendrick said. “We will not be able to recruit new companies who want to bring in top talent from other places if they cannot promise those future employees that they will be treated equitably.”

There are major differences, however, between the North Carolina law and HB 24, which has been sent back to the House for review before it is considered by Alabama Gov. Kay Ivey. HB 2 was a bathroom bill which prevented transgender people from using the restroom appropriate to their gender identity in schools and government buildings, while Marshall compared the faith-based adoption bill to “religious exemption” laws introduced in other state legislatures. Currently, 45 bills are under consideration across the country that would allow people of faith to discriminate against LGBT people on the basis of religion.

South Dakota passed a law in March allowing adoption and foster care agencies to deny placement to LGBT families, while a similar bill stalled in the Texas General Assembly earlier this year. The American Civil Liberties Union has estimated that this year, state legislatures will debate over 200 laws aimed at curtailing the rights of the LGBT community.

Marshall called the onslaught of discriminatory litigation a “kneejerk backlash” to the “sea change” in LGBT rights in recent years.

While passing HB 24 would be bad for everyone, advocates say it’s children who would be hit the hardest. Kendrick, who is currently applying to be a foster parent with her partner, said there aren’t nearly enough families in Alabama to meet the high demand. The couple lives in Jefferson County, the largest in the state, and Kendrick said that there are just 250 homes registered in the foster care system. There are 1,200 children who need placement in Jefferson County, and many, many more across the state.

“HB 24 would do the most harm to the more than 5,500 children in Alabama’s child welfare system who are waiting for loving and stable families and they’re calling this a solution and an inclusive act,” Kendrick said. “It’s a solution to a nonexistent problem.”

Gov. Ivey, sworn in following the resignation of former Gov. Robert Bentley, has claimed that she wants to steady “the ship of state” following a sex scandal which forced her predecessor to step down. LGBT advocates believe that Ivey, whose spokesperson claimed that the new governor “still needs time to review the bill,” has a golden opportunity to do so — by standing up for Alabama’s children.

“It’s turning the whole standard of what’s in a child’s best interests on its head in order to vindicate somebody’s perceived religious belief,” Marshall said. “We can’t afford to lose any loving, qualified families who want to adopt.”