Trump's anti-environment entertainments will crash against the bulwark of good, old-fashioned administrative law 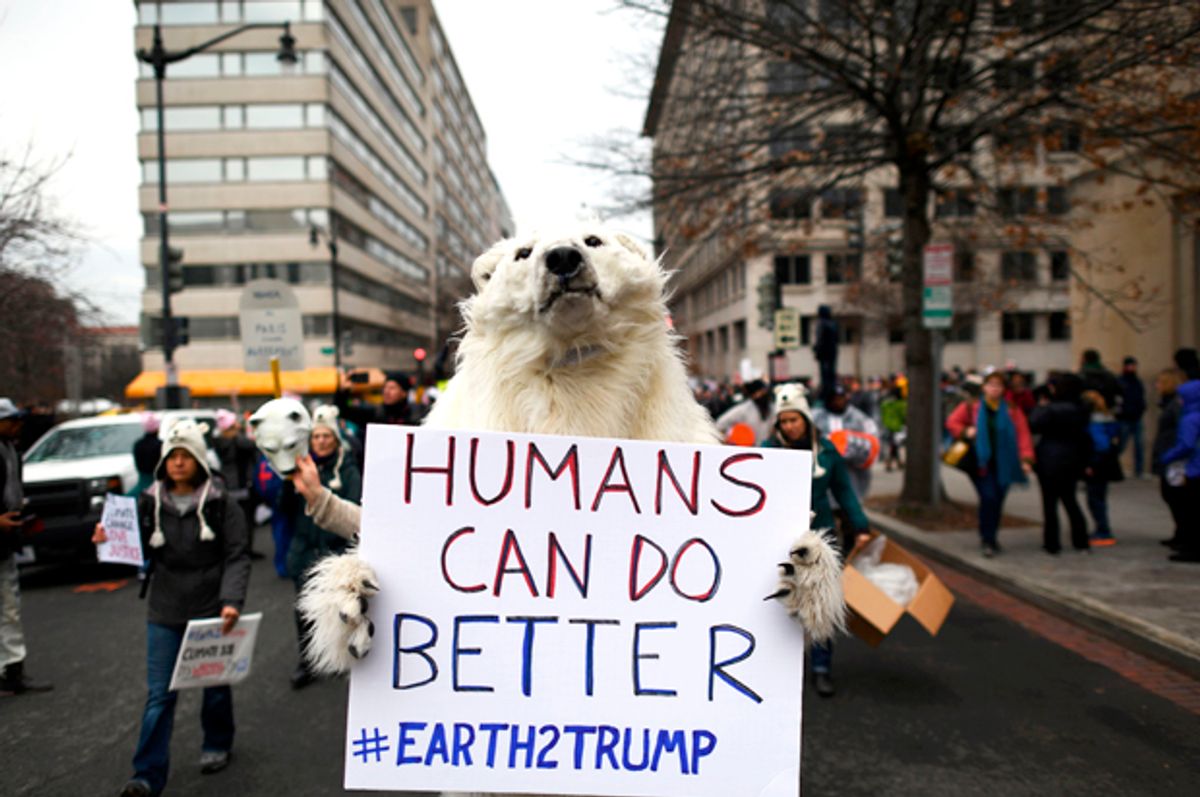 As recently as 2009, Donald Trump and his children signed onto a full-page New York Times advertisement urging climate action, because the science was “irrefutable” and the consequences “catastrophic and irreversible.” Now this. Sad.

But like so much of what this Oval Office does, this executive order was more political theatrics than real policy. Whether Trump is in on the show, or whether he’s more like the addle-headed king whose ministers put shiny proclamations in front of him to keep him occupied and amused, is a question we need not answer here. Either way, his anti-environment entertainments will crash against the bulwark of good, old-fashioned administrative law — the rules governing how we govern.

America is not, despite Trump’s best efforts, a banana republic. The administrative agencies that Trump directed to stop taking action on climate change are obliged to follow the law first, not his executive orders, and they will be held to the law by courts. These agencies can’t make decisions that are, to use the standard of administrative law, “arbitrary and capricious.” This is a White House that lives by being arbitrary and capricious, but administrative agencies cannot be, or their work will be thrown out in court — not by “so-called” judges, by real judges.

Look at the Clean Power Plan, a main target of the recent executive order. That plan was established under the Clean Air Act, a law that overrides any executive order. The question of whether carbon dioxide is a pollutant under the Clean Air Act has been settled, by the Supreme Court no less. Its dangerousness has been established as well. So you have as a matter of law a dangerous pollutant, and under the law, that must be regulated.

The Clean Power Plan is not the only such regulation: EPA’s “Waters of the United States” rule is also based squarely on Supreme Court opinions interpreting the Clean Water Act. Under the Administrative Procedures Act, agencies implementing the Clean Air Act or the Clean Water Act have to follow real facts. “Alternative facts” conjured up in the fever swamp of the Breitbart imagination may be good enough for this White House, and falsehoods have long been cranked out by the fossil fuel industry’s climate-denial scheme, but it would be illegal for agencies to rely on them. Facts have to be real. They have to be sufficient to support the determination of the agency, and the determination has to reasonably stand on those facts.

Judicial review is the key backstop for addressing climate change. It is very hard for the lies that are at the heart of climate denial to withstand judicial scrutiny. Smelly conflicts of interest can be exposed, and administrators with those smelly conflicts can be removed. Judges aren’t influenced by campaign contributions or political threats. The law, and real facts, have the upper hand.

So this latest performance of the Trump Executive Order Show was mostly a waste of time, because ultimately lawyers and courts will see to it that law and truth have the final say. In the meantime, it’s still embarrassing. And it’s harmful, since in the fight against climate change, time is not on our side.