Recycling old film: Two Tribeca features — with "Girls" ties — do so to opposite effect

A look at “The Boy Downstairs” with Zosia Mamet, and Laurie Simmons' “My Art,” featuring her daughter Lena Dunham 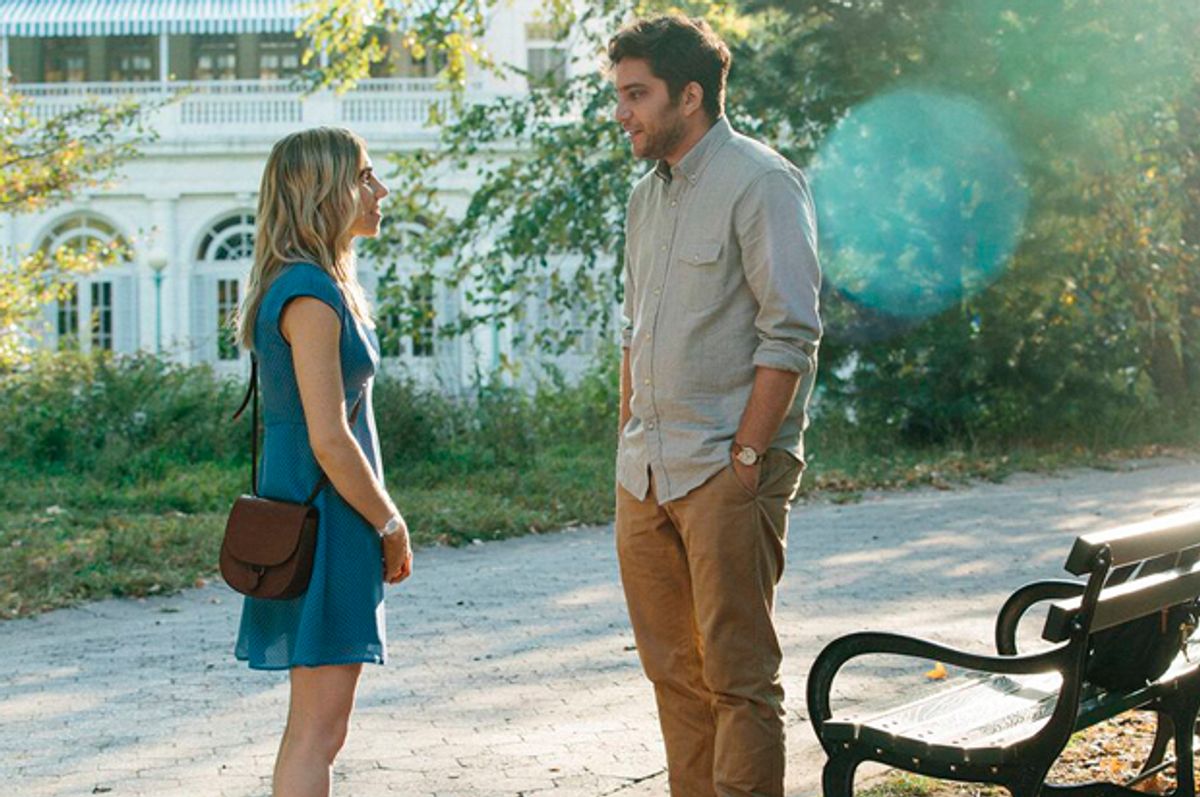 “The Boy Downstairs” is a film that cannot move forward without moving backward. Diana (Zosia Mamet, most recently of HBO's "Girls") is betwixt and between. She is an aspiring fiction writer, who after a two-year stint in London, has just moved back to New York and is working at a high-end bridal shop. The job is not difficult, but it is annoying. In an early scene, a snooty mother and daughter refuse to accept that the shop, which claims it can customize dresses, will not make a dress in a color other than white or off-white.

The scene is meant to communicate that Diana is out of place, but it winds up being an inadvertent metaphor for a film that is without color. Both literally and figuratively, “The Boy Downstairs” operates in shades of white. There is nary a black face, Diana’s hair is dyed platinum blonde and the interior of the beautiful Brooklyn brownstone she moves into is the color of an alabaster space station. The film’s minimalist visual style is fashionable in a way that is familiar to anyone who has been to an Apple store or scrolled through Pinterest. Its will-they-or-won’t-they plot is similarly generic and uninspired.

But I’m getting ahead of myself. It’s that lily-white apartment that grounds Diana’s future in her past. Initially, the apartment seems perfect. It’s clean and pretty, and Diana’s roommate is a charming and motherly widow (played by Deirdre O’Connell). But when Diana checks her mail, she sees that she has hit the lottery of awkward scenarios. Her downstairs roommate is her ex-boyfriend, Ben (Matthew Shear).

This is when the flashbacks begin. We learn what happened between Diana and Ben, beginning with their schmaltzy first date in Central Park and ending with their emotional breakup, in chronological segments of memory. The flashbacks work like a condom on a penis: It’s a useful device, used for unimaginative means. As Diana’s mind moves from the past to the present, the viewer’s moves only toward the past — to the many romantic comedies this one unabashedly resembles: It’s Nora Ephron without the wit, Judd Apatow without the raunchiness, Roger Kumble’s “Just Friends” without the absurd high jinks; I could go on. Sophie Brooks, who wrote and directed the film, has borrowed too many rom-com tropes not to subvert any of them.

But she doesn’t. Ben is the sweet-but-pathetic victim of Diana’s mercurial young heart and mind. When she re-enters his life, he can’t just be friends with her. And Diana cannot excel professionally until she lays it all on the line personally.

That a life without risks is no life at all is a familiar moral in cinema, used to great effect elsewhere (“Rounders,” the entire “Rocky” franchise). But “The Boy Downstairs” doesn’t take enough risks to earn the right to advocate on behalf of taking risks.

The film’s clichés extend to its portrayal of being a writer in New York. Diana types and scribbles away from tables at chic cafes, the corner of her bed, a park bench, all the while wearing designer clothes, munching on artisan treats and sipping coffee. She looks more like a social-media projection of a #writer than an actual one. Her New York is superficial, indistinct from the hip streets of any other city; we never get a glimpse of life beyond the world of the young, privileged class.

Perhaps the astronomical price of living in New York has made people like Diana representative of the city’s modern creative class. But what’s more discomfiting than her privilege — and by extension the privilege of this film — is that she and the film fail to grapple with it. About midway through “The Boy Downstairs,” Diana becomes that fussy customer in the bridal shop: When a waiter at an Italian restaurant denies her a lemon for her water, she and Ben reconnect by making fun of the waiter: Whereas we were supposed to laugh at the difficult mother and daughter, we are supposed to laugh with Diana. Ultimately, neither joke is very funny.

The first images of Laurie Simmons’ “My Art” are blinding — whiter than any image in “The Boy Downstairs.” The film begins with Ellie (Simmons) exiting one of the Whitney Museum’s vast “2001”-esque elevators and perusing a gallery. The credits come on the screen in a similar wall-as-backdrop fashion as in “The Young Pope.”

Simmons, a multimedia artist and the mother of Lena Dunham, plays Ellie, an artist who resembles herself in broad strokes. But unlike Simmons, who is married, Ellie is single. And instead of playing her daughter, Dunham is cast as Ellie's former student Meryl. Ellie meets Meryl on the roof of the Whitney, which overlooks the city. They reminisce about Ellie’s class and commiserate about the busyness of an artist’s life. After Meryl leaves, Ellie collapses into one of the deck chairs. She’s at the top of the greatest city in the world but too tired and familiar with it to marvel at it all.

Ellie is 65 and ready to slow down — at least for a summer. She borrows a friend’s vintage camera and drives her Mercedes to another friend’s idyllic upstate cottage, where she will be alone but for her art and her adorably disabled dog, Bing.

Like in Kathleen Collins’ underappreciated 1982 indie comedy “Losing Ground,” upstate New York is both haven and muse. When Ellie arrives, she opens the house’s many doors to the outside and treats herself to the cigarettes and marijuana edibles in the fridge. And when she ventures outside the next morning, vivacious vegetation consumes the screen; the pastures are quite literally greener than in the city. Simmons uses the first scene’s white museum walls as a blank canvas over which to paint subsequent images of natural life. You can hear the bugs buzz.

Ellie lets herself play. She sets up a studio in the barn and re-enacts different old movies — from “Some Like It Hot” to “A Clockwork Orange” — using wigs, impressively reconstructed sets, miniatures and her old-time lens. She explores nostalgia and memory through her art, she says early on, a meta admission.

Seemingly everyone Ellie meets, from her landscapers, to a date, to her waitress, is a former actor, a wannabe actor or an aspiring actor. And Ellie sees a role for each of them. She forms a sort of miniature troop, letting each person shine in some classic role.

Ellie’s work maintains a faithful reverence to the original scenes — this is certainly not satire — but underlying the performances is the inescapable fact that the past can’t be re-created. When Frank (Robert Clohessy), a burly but sensitive gardener, asks how to play his role, Ellie tells him the performance is about the impossibility of her being Marilyn Monroe and his being Clark Gable.

The work pours out of Ellie and her new friends. These 60-somethings become children for the summer, at a camp of their own creating. The world they build is mystical — both to them and to the viewer: The films within the film are entirely winsome; as a viewer, it’s delightful to recognize the originals in the re-creations.

But all summers are ephemeral. And while art can connect, it can also isolate. The country is ultimately a summertime fling for Ellie, not a serious companion. It’s left to the viewer to decide whether it’s tragic that this magical summer has to end or beautiful that it happened in the first place.

“My Art” nods to past works of cinema more explicitly than “The Boy Downstairs.” But the difference is essential: “The Boy Downstairs” reaffirms the viewer’s notion of how fantasy is meant to proceed; “My Art” makes the viewer rethink his or her fantasy of what is old or mediated. One is bold; the other is a bust.