"The Handmaid's Tale": A dystopian tale of female subjugation that hits close to home 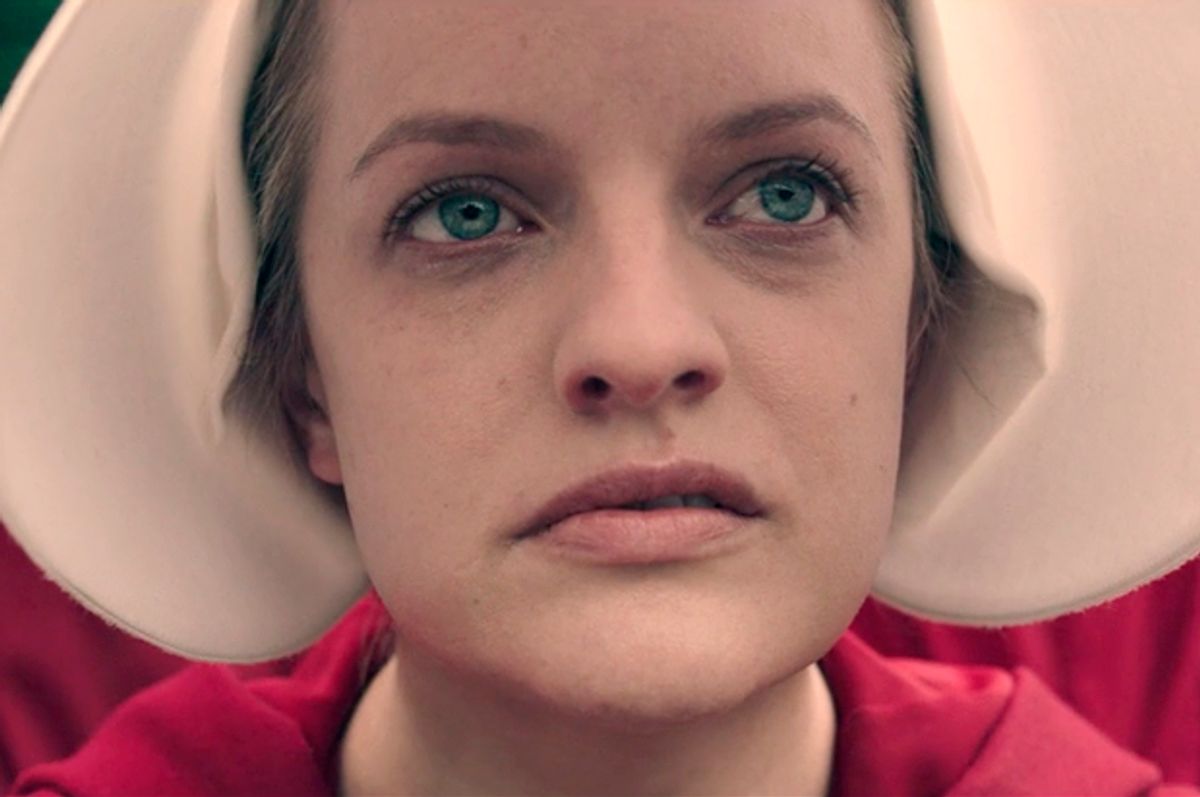 As laid out in Margaret Atwood's novel "The Handmaid's Tale," the events leading to America's transformation into the Christian fundamentalist-governed Gilead are believable enough. First Congress and the president are slaughtered, and this mass tragedy is blamed on "Islamic fanatics." Martial law is declared. The Constitution is suspended; the newspapers, censored. Soon Identipasses are required for moving about.

"Everyone approved of that," Atwood wrote, "since it was obvious you couldn't be too careful."

Atwood's novel was published in 1985 as a work of speculative fiction. On Wednesday, when the television series adaptation of "The Handmaid's Tale" premieres on Hulu, the most frightening scenes are the ones that look like our version of the present or the near-future — days recently gone by for the woman known as Offred (Elisabeth Moss).

In those brief glimpses, Moss' character enjoys drinks in the park with her best friend Moira (Samira Wiley) or watches her husband Luke (O-T Fagbenle) play at the beach with their young child. There's even a reference to Tinder during one of the indoctrination sessions at the re-education center where women from the old world are transformed into broodmares suitable for the new one.

The pop culture references will be dated, but the arrival of this drama at this time in history is particularly significant. America may not be headed to Gilead yet, but the parallels between reality and fiction do make the stomach churn.

"The Handmaid's Tale" was first announced in April 2016, months before the world heard recordings of the man who would become the U.S. president bragging about grabbing women by the pussy; before the judicial and executive branches would clash over Muslim bans; before we feared a new Supreme Court judge and our latest attorney general would tilt justice against the causes of civil and reproductive rights.

Ours is a regressive time, necessitating marches in support of science, which remains difficult to fathom. We exist in a post-truth, post-Enlightenment world, in which warnings to refrain from normalizing reality-blurring propaganda and bigotry abound. And that makes the declaration of sadistic Handmaid guard Aunt Lydia (formidably rendered by Ann Dowd) all the more chilling.

"Ordinary is just what you're used to," Aunt Lydia tells her charges, cattle prod in hand. "This may not seem ordinary to you right now, but after a time it will. This will become ordinary!"

"The Handmaid's Tale" is anything but that. Through careful direction and precise writing shaped by showrunner Bruce Miller, this is a drama that is remarkable in its ability to horrify while maintaining a delicate air. As threatening and oppressive as the world of Gilead is, the series has an energetic stamina about it that prevents the story from sinking under the weight of despondency. Offred's situation seems impossibly unbearable, yet Moss's command of still defiance gives "The Handmaid's Tale" its fire.

Near the beginning of the premiere Offred is quietly ensconced in her plain bedroom, explaining in a voiceover how her world has been reduced to a small room with shatterproof glass windows, to prevent escape of a permanent variety. Her vocal intonation in these revelatory asides is dull and lifeless but honest, even flecked with dark invective. Her inner voice, the one the viewer is privy to hearing, is all she has left.

Offred's mouth contradicts her true thoughts as a means of survival, as she offers devout praises to a God she doesn't believe in or confirms her obeisance. As a Handmaid, a fertile woman in a society where environmental degradation resulted in plummeting birth rates, Offred is a woman of high value but low status who is forbidden to read, to think for herself or harbor any opinions. The Handmaid designation refers to the biblical story of Rachel and her servant Bilhah, who had children with Rachel's husband Jacob because Rachel was barren.

Even Offred's  name is not her own; her current placement in the home of Commander Fred Waterford (Joseph Fiennes) makes her "of Fred." Commander Waterford's wife Serena Joy (Yvonne Strahovski) is infertile but as a woman of means in a society where reproduction is a duty to the state, she must share her bed with Offred at regularly prescribed times, in lifeless acts of mechanical copulation known as the Ceremony.

When Atwood began weaving the dystopian vision that eventually manifested as "The Handmaid's Tale" it was 1984 — not George Orwell's, but Ronald Reagan's. In writing the novel, Atwood was less concerned about peering into a fantasized future but instead wished to examine one informed in a real way by history as well as political and social trends.

Primarily drawing upon her studies of American Puritanism, Atwood viewed the story as a manifestation of the cycle of advancement then recession for human equality, specifically women's rights. The late '70s and early '80s placed anti-feminist firebrand Phyllis Schlafly on the national stage, accompanied by the rising tide of fundamentalist Christianity's influence in American politics. Atwood was also living in West Berlin when she wrote the story, a place merely four decades removed from the fist of a murderous totalitarian regime.

Many of the horrors depicted in "The Handmaid's Tale" are scenes of atrocities made commonplace under violent dictatorships — bodies hanging from walls, expedient and casual corporal punishment, even the heartlessness of the Ceremony itself.

The series expands upon the novel's subplot that involves women subjugating women for the sake of survival in interesting ways via a predatory dance between Offred and Serena Joy, whose actual feeling Strahovski masks with icy mettle. Offred and Serena Joy need each other but have no sympathy for their respective plights.

Offred was previously an independent woman with a career and skills, forcibly ripped from that world to become breeding stock for a barren woman of privilege. The commander's wife has the upper hand, but her power depends entirely on her husband's position in the world. Offred's life is bound to her usefulness — if she can't procreate, she'll be designated an "Unwoman" and shuffled off to a horrendous fate. Thus, she detests the religious hypocrites grinding her down, hates that and hates the commander's wife and hates Gilead. The trick is to never let anyone know it.

And this atmosphere of distrust permeates and frustrates everything in Offred's world. She does not know whether to trust her designated companion Ofglen (Alexis Bledel), who may be spying on her or could be the only soul with whom she can be honest. She can't commiserate with the domestic in the commander's house, known as a Martha. Nothing is certain because nothing is her own, save for her will.

Gilead may be the creation of religious patriarchy grown monstrous, but "The Handmaid's Tale" is a creation shaped by the female gaze. Reed Morano, who directed the first three episodes, establishes a visual language that plays as important a role in this series as the dialogue. Creating a world emphasizing that old adage of "a place for everything, and everything in its place," her lush cinematography latches onto the hazy nightmarishness of Offred's tenuous existence.

Under her eye, Gilead is a place of shadowed interiors, where costume designer Ane Crabtree's creations remind us with elegant subtlety of the place's sinister caste system.

The aquamarine dress of the commander's wife pops into the fore in dim hallways, the dove gray worn by the Marthas and Aunts demarcate the border between light and shadow, and the handmaids' scarlet dresses mark them as targets as well as silent, compliant objects of desire. Morano emphasizes tight shots on the actors' faces, allowing their expressions to scream the truth of each moment even as the words flatly spilling from their lips say something different.

For while red is the color of seduction and life, it can also be the shade associated with anger, blood and rebellion. As Offred, Moss wears red on her body and it simmers within her heart of hearts, too. A sublimated rouge of rage pulses in Offred's eyes, hidden under the white "wings" of the headdress she wears outdoors.

And Moss' acting style works in concert with Morano's direction. She devastatingly conveys Offred's seething exasperation with shock darting through slightly widened eyes or tiny curls of defiance dancing around the edge of her lips. Those milliseconds of honesty make the viewer's adrenaline spike along with the character's.

The actress perfected the art of speaking volumes and saying little, softly, in her initial portrayal of Peggy Olson on "Mad Men," and she does a marvelous job of playing with those tones here. But Peggy finds her voice and wields more agency in her life as she climbs the ranks from Don Draper's secretary to copy chief at Sterling Cooper & Partners. Offred may never see such a level of freedom again.

And through Morano granting the audience that level of emotional omniscience, the viewers become distant witnesses to the crimes endured in Gilead. It's as if we're watching from an existence apart from a world gone quietly insane. But any distance this is supposed to give us is eradicated by how much our precarious present bears a discomfiting resemblance to the fiction on our screens.