Are American voters actually just stupid? A new poll suggests the answer may be "yes"

ABC News poll suggests that if we ran the election all over again, Trump would still win — by more. What gives? 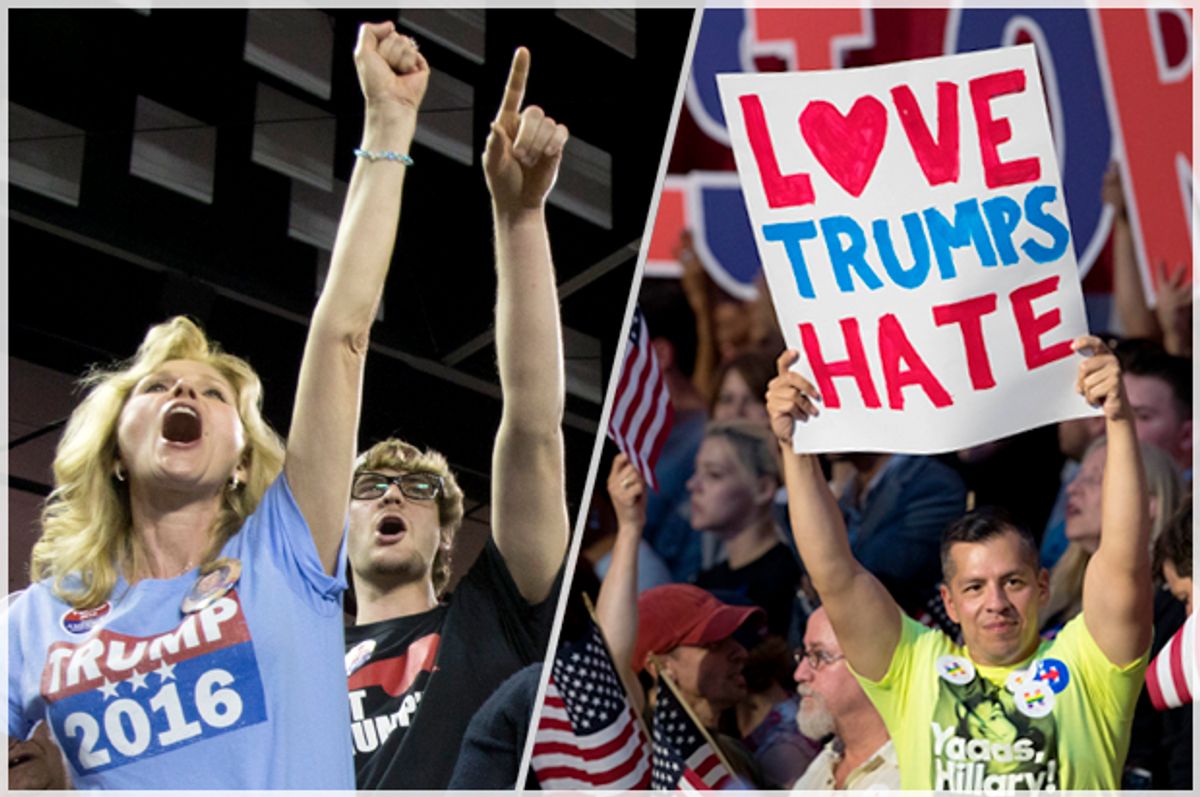 Are tens of millions of Americans really this stupid? If the findings from a new ABC News poll are any indication, then the answer is yes:

There's no honeymoon for Donald Trump in a new ABC News/Washington Post poll but also no regrets: He approaches his 100th day in office with the lowest approval rating at this point of any other president in polls since 1945 — yet 96 percent of those who supported him in November say they'd do so again today. . . .

Among those who report having voted for [Trump] in November, 96 percent today say it was the right thing to do; a mere 2 percent regret it. And if a rerun of the election were held today, the poll indicates even the possibility of a Trump victory in the popular vote among 2016 voters.

This is despite all the lies Donald Trump has told and all the campaign promises he has betrayed: He has not "drained the swamp" of lobbyists and corporate fat cats, has not built his "huge" and "amazing" wall along the Mexican-American border, has not returned jobs to the United States and has not repealed the Affordable Care Act. Indeed, as of Day 100 of his presidency Trump has fulfilled few of his main campaign promises.

Moreover, the fact that 96 percent of Trump's voters would make the same decision again despite overwhelming evidence that President Vladimir Putin interfered in the 2016 presidential election with the goal of installing Trump as a puppet candidate raises many troubling questions about how tens of millions of American voters were "flipped" by a foreign power to act against their own country.

It is easy to mock Donald Trump's voters and suggest that their loyalty reflects poorly on their intelligence and capacity for rational thinking. Before doing so, one should consider the following ABC News-Washington Post data about Hillary Clinton's voters:

Among surveyed Americans who say they voted in the 2016 election, 46 percent say they voted for Hillary Clinton and 43 percent for Trump — very close to the 2-point margin in the popular vote. However, while Trump would retain almost all of his support if the election were held again today (96 percent), fewer of Clinton's supporters say they'd stick with her (85 percent), producing a 40-43 percent Clinton-Trump result in a hypothetical redo among self-reported 2016 voters.

That's not because former Clinton supporters would now back Trump; only 2 percent of them say they'd do so, similar to the 1 percent of Trump voters who say they'd switch to Clinton. Instead, they're more apt to say they'd vote for a third-party candidate or wouldn't vote.

President Donald Trump is the antithesis of what Hillary Clinton's voters desired in a candidate. And in many ways Donald Trump's incompetent, ignorant, reckless, racist, demagogic and cruel behavior in office is worse than even his most concerned and cynical critics had predicted. This outcome should motivate Clinton's voters to become more engaged and more active, instead of making a decision in a hypothetical election that might actually give Trump a victory in the popular vote.

The findings from this new poll are troubling. But they should not come as a surprise.

Political scientists and other researchers have repeatedly documented that the American public does not have a sophisticated knowledge on political matters. The average American also does not use a coherent and consistent political ideology to make voting decisions. As Larry Bartels and Christopher Achen demonstrate in their new book "Democracy for Realists: Why Elections Do Not Produce Responsive Government," Americans have identities and values that elites manipulate, which voters in turn use to process information — however incorrectly.

While some groups of voters may apply decision-rules based on community concerns (African-Americans fit this model), American voters en masse are not rational actors who seriously consider the available information, develop knowledge and expertise about their specific worries and then make political choices that would maximize their goals.

These matters are further complicated when considering right-wing voters. While Trump may have failed in most of his policy goals, he has succeeded symbolically in terms of his racist and nativist crusade against people of color and Muslims. Given the centrality of racism and white supremacy in today's Republican Party specifically, and movement conservatism more generally, Trump's hostility to people of color can be counted as a type of "success" by his racially resentful white voters.

American conservatives and right-leaning independents are also ensconced in an alternative news media universe that rejects empirical reality. A combination of disinformation and outright lies from the right-wing media, in combination with "fake news" circulated online by Russian operatives and others, has conditioned Trump voters and other Republicans to make decisions with no basis in fact. American conservatives do, however, possess a surplus of incorrect information. In that context, their political decisions may actually make sense to them: This is a version of "garbage in, garbage out."

Republican voters also tend to be have more authoritarian views than the general public. As a type of motivated social cognition, conservatism is typified by deference to authority, groupthink, conformity, social dominance behavior and hostility to new experiences and new information. These attributes combine to make Trump voters less likely to regret supporting him and in some cases — because of a phenomenon known as "information backfire"— to become more recalcitrant when shown that Trump's policies have failed in practice.

This ABC News/Washington Post poll also signals a deeper problem. In different ways, both Trump and Clinton voters appear unable to connect their personal political decisions to questions of institutional power and political outcomes. This is a crisis of civic literacy that threatens the foundations of American democracy.

For example, many of Trump's voters know that his policies will hurt people like them. Yet they still support Trump anyway. The Clinton supporters who reported that they either would not participate or would choose a third candidate if they were able to vote again would select a decision that would make matters worse, by effectively guaranteeing that Trump -- the candidate they claim to reject -- would be elected.

This is but one more reminder that Donald Trump's victory was not a sudden crisis or unexpected surprise. The neofascist movement that Trump represents was an iceberg of sorts — one that was a long time in the making. If this new poll is correct, many millions of Americans would make choices that would steer the ship of state into that same iceberg all over again. Such an outcome is ominous. The thought process that would rationalize such a decision is deranged.

Yale historian Timothy Snyder has argued that a democracy has about one year to reverse course if it has succumbed to fascism and authoritarianism. America's civic literacy crisis may mean that the country has even less time than Snyder's prediction suggests.