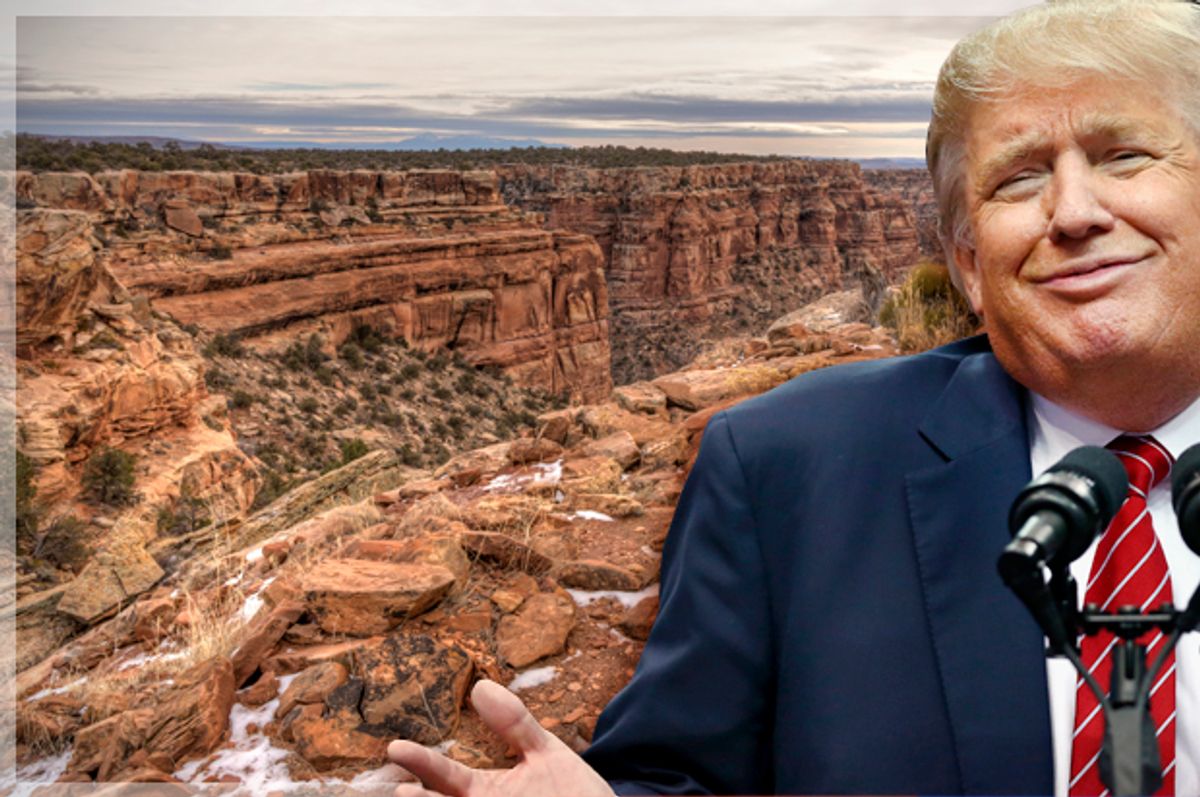 In a pathetic bid to create the illusion of accomplishment in his first 100 days in office, President Donald Trump will spend the last week of April signing a flurry of executive orders. Copies of these orders were leaked, allegedly by a source with direct White House knowledge, to Jonathan Swan of Axios. One of these orders, expected to be signed on Wednesday, will apparently direct the Department of the Interior to "review" President Barack Obama's use of the 1906 Antiquities Act to designate national monuments.

Despite the bland-sounding language, this anticipated order is perhaps the best encapsulation of how radical the Republican agenda became under Obama, and how the GOP obsession with denying the former president's legitimacy continues to define the party in general and Trump's presidency in particular.

Sixteen presidents have used the Antiquities Act, creating 157 national monuments, in the century since President Teddy Roosevelt — a Republican! — signed it into law. It has enjoyed bipartisan support for most of its existence. But the president's long-standing right to designate national monuments became controversial when a black Democrat that many Republicans refused to accept became president.

Obama designated 29 sites, a mix of public parks and small historical sites — including the Stonewall Inn in New York, the site of the famous LGBT rights protest — as national monuments. But what has has drawn the most Republican ire was the designation of the Bears Ears National Monument in Utah, which the Salt Lake Tribune described as "the archaeological sandstone wonderland bounded by the San Juan and Colorado rivers west of Blanding." The area includes mountains, canyons and a variety of archaeological sites important to Native American tribes in the region.

Many observers feel the planned executive order is a sop to congressional Republicans from Utah, especially Rep. Rob Bishop, who heads the House Committee on Natural Resources, and the soon-to-retire Rep. Jason Chaffetz, head of the House Oversight Committee. Both have been loud voices protesting both the Bears Ears designation and what Bishop has hyperbolically deemed "Antiquities Act abuse." When Obama made the designation in December, Chaffetz exploded in outrage, even going so far as to threaten to use his investigative powers on the oversight panel to harass the staff at Bryce Canyon National Park over a tweet that welcomed Bears Ears into the federal land family.

The "review" language of the anticipated order reflects the arguments of the Republican opponents of Bears Ears — who claim to object to Obama's methods.

"Under the Antiquities Act, there is no ability of having any input," Bishop told NPR in February. "No one ever gets to have a say; you don't work out things in advance," he added. "It has to be a gotcha moment where the president unveils something unilaterally."

“It was very clear, across the past few years, that [Bears Ears] really needed more protection, and that it’s one of the most incredible landscapes across the west," said Tania Lown-Hecht, the communications director of the Outdoor Alliance, in a phone conversation. Because of this, she said, the Obama administration put considerable time and effort into listening to the various stakeholders in the area.

An April 13 press release from Democrats on the House Committee on Natural Resources spelled that out in some detail:

A new memo detailing internal documents produced by the Department of the Interior in response to a request by the House Committee on Oversight and Government Reform shows a years-long record of extensive contact between agency officials and a wide array of federal, state, and local stakeholders leading up to the designation of Bears Ears National Monument.

Last July then-Interior Secretary Sally Jewell made a four-day fact-finding trip to the region and spoke to various community leaders, including representatives from Native American tribes that want to see ancestral lands preserved. The trip culminated in a packed meeting that ran more than three hours, during which two dozen local leaders and five dozen community representatives spoke.

Despite the fact that the Obama administration solicited and received all that input, it wasn't enough for Bishop.

Obama's decision "does not take into account the various uses that the land can do," Bishop complained in his NPR interview.

In response to the Obama administration's moves to create this new national monument, Chaffetz and Bishop last year introduced a bill called the Utah Public Lands Initiative, portrayed as a compromise between Native American tribes, outdoor recreation fans, environmentalists and business interests. It's not a surprise that the bill was considerably friendlier toward the extraction industries than a national monument designation would be.

The Obama administration gave the congressmen half a year to get some movement on the bill. When that didn't happen, Obama went ahead and used the 100-year-old power he had to make Bears Ears a national monument.

Now Bishop is looking for a back-door method to undo what has been done.

"Despite the fact that he could bring up a bill to rescind the designation himself at any time — as chairman, he sets the agenda for the committee — Bishop has decided to try to persuade the Trump administration to fight his battle for him," wrote the ranking Democratic member of the House Natural Resources Committee, Raúl M. Grijalva, in a Feb. 25 op-ed for The Salt Lake Tribune.

That's likely because Bishop knows full well that getting such a bill through Congress is unlikely to happen, Lown-Hecht said in our interview. Preserving public lands is simply too popular with voters across the ideological spectrum.

Pressuring Trump to sign this executive order is particularly rich coming from Bishop, a man who in January accused Obama of trying "to bypass Congress" with executive orders and said, “I think, philosophically, that’s what we have to realize: That executive orders have run their course."

Less than a month after declaring his supposedly principled objection to executive orders, Bishop was calling on Trump to use executive order power for the unprecedented action of nullifying Obama's Bears Ears decision.

Trump's expected order doesn't go as far as Bishop has wished, however. The president is expected to ask for a "review" instead of an outright reversal. Part of the reason could be that reversing an Antiquities Act decision may not be legal.

"It will be interesting to see if a president can nullify a monument," Ryan Zinke, Trump's interior secretary, said during his confirmation hearing. "Legally, it's untested."

It's quite possible then that this "review" of the Bears Ears decision is a sop to Bishop and other right-wing radicals on this question, one that will eventually amount to nothing. But many environmentalists still worry that the Interior Department will cave into pressure and try to reverse the Obama decision.

"This is a frightening step toward dismantling protections for some of America’s most important and iconic places: our national parks and monuments,” said Kieran Suckling of the Center for Biological Diversity in a statement. “President Trump is tapping into the right-wing, anti-public-land zealotry that will take us down a very dangerous path — a place where Americans no longer have control over public lands and corporations are left to log, mine and bulldoze them into oblivion."